EXCLUSIVE TRACK PREMIERE: Heads for the Dead – The Bloodline 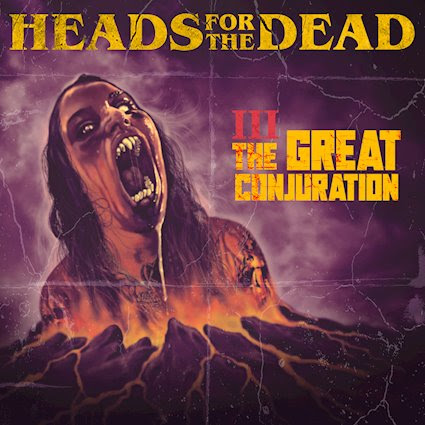 Band – Heads for the Dead

The Bloodline is a slow burn, dripping with gore-soaked vocals, relentlessly marching towards the kill. This is the sonic equivalent of the best Michael Myers moments. You know what’s coming, but your hackles are raised anyway. Absolutely flawless execution who once again stakes claim to being this writer’s favorite OSDM project. The guys are in feral form here. Give it a spin, then jump below for my full review.

For those playing along at home, this is the third full length by this international collaboration of some of death metal’s underground elite. It also marks the third time I’ve reviewed the band, who are now firmly entrenched as my favorite of this style of death metal, not least because they manage to present a unique sound in a field of imitators. You can read my review of the phenomenal debut Serpent’s Curse here and the sophomore release Into the Red here. I also had the former at number ten on my Album of the Year list in 2018 and the latter at number fourteen in 2020. The reality is that I slightly prefer the latter, but it faced tougher competition. The Great Conjuration has a promising future in the top half of my 2022 list somewhere, but time and repeat spins will determine where it falls this year, and in the greater Heads for the Dead discography.

This incarnation of the quartet features Jon Rudin (Wombbath) as a new-to-the-band drummer, replacing Ed Warby. Rudin’s creative pummeling of the skins continues to stand the band in good stead rhythmically. On the back end, he is joined by Jonny Pettersson (Wombbath, most famously), who also handles guitar, keys, and FX. The multi-instrumentalist continues to work his haunting magic throughout. Guitar solos are provided for this album by Matt Moliti (Sentient Horror), while Ralf Hauber (Revel in Flesh) continues to haunt the listener with his lyrical concepts and vocal delivery.

As stated above, Heads for the Dead have their own sound. It’s difficult to define exactly what that means, as they are also clearly an OSDM band. What they’re not is formulaic. Their tuning and tones take their sound deep into the tombs of the damned. Hauber’s vocals delivery is flawless, equal parts ominous foreboding and maniacal madman. The overall composition is immersive, taking us into the nightmare. The subtle FX Pettersson provides add to the unsettling atmosphere. Perhaps we could call this atmospheric OSDM, but the atmosphere is one of blackest horror.

The album can be pre-ordered on the Transcending Obscurity Records Bandcamp or Website.