Heads For The Dead – Into The Red 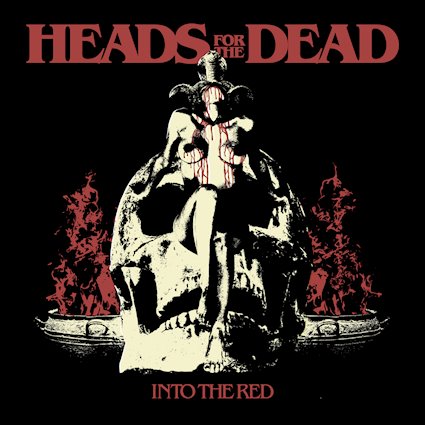 Band – Heads For The Dead

Album – Into The Red

The opening of Into The Red (both the title track and first track on the album) hits like a Mac truck. There is no atmospheric easing into this album. The trio go straight for the jugular and, honestly, never let go. The opening riff, after the sucker punch to the throat, is one of the nastiest riffs I’ve ever heard in both tone and intent. Whatever Jonny Pettersson (guitars, bass, keys, FX) did with his guitar to achieve that sound is masterful. From that moment forward (literally the first moment of the album), the band holds you completely in thrall to the horror they present.

Horror and metal have a long history together. Horror movies and your favorite death metal albums have long gone hand in hand. What Heads For The Dead do here though, is to create a horror soundtrack that needs no visuals to drive home the terror. The music itself is more than enough to do that. The atmosphere created by the riffs and rhythm of the guitar, the rattling earthquake bass work, the subtle, ominous keys, and the various FX, are enough to make your skin crawl. Add the thundering drum work of Ed Warbie, who deftly flows through various styles (rock and roll to double bass, and everything else in between), adds a push/pull pacing that keeps you off balance. His hit selection is subtly perfect in variety and precision. From the first gravelly “Into the red…” bellowed by vocalist Ralf Hauber, you know that that piece will be intense as well. Indeed, he runs through a variety of vocal styles in an attacking manner to present the horrifying stories told in this masterpiece of death metal.

Serpent’s Curse (2018), the debut album by this group, came out of nowhere to turn many heads, including mine. It was my favorite death metal album of that year, and this sophomore release shows no signs of a let down. I think what the band does so well is to take a style that is decades old, present it without any especially new bells and whistles, and yet make it fresh and visceral. This is old school death metal, but it is far from stale. On Into The Red, Heads For The Dead once again demonstrate the vibrancy still possible in the style.

Into The Red will trap you in a nightmare world. The album uses a variety of song lengths, a variety of pacing within and between songs, and tight composition and performance to keep the listener in their grasp. Among the relentless moments, there are also moments when the music minimizes to highlight the rasp of Hauber as he sharpens his blade for the final kill. It’s like looking up to see Michael Myers standing at the end of a hedge, only to have him gone when you turn back.

I’m craving for your blood