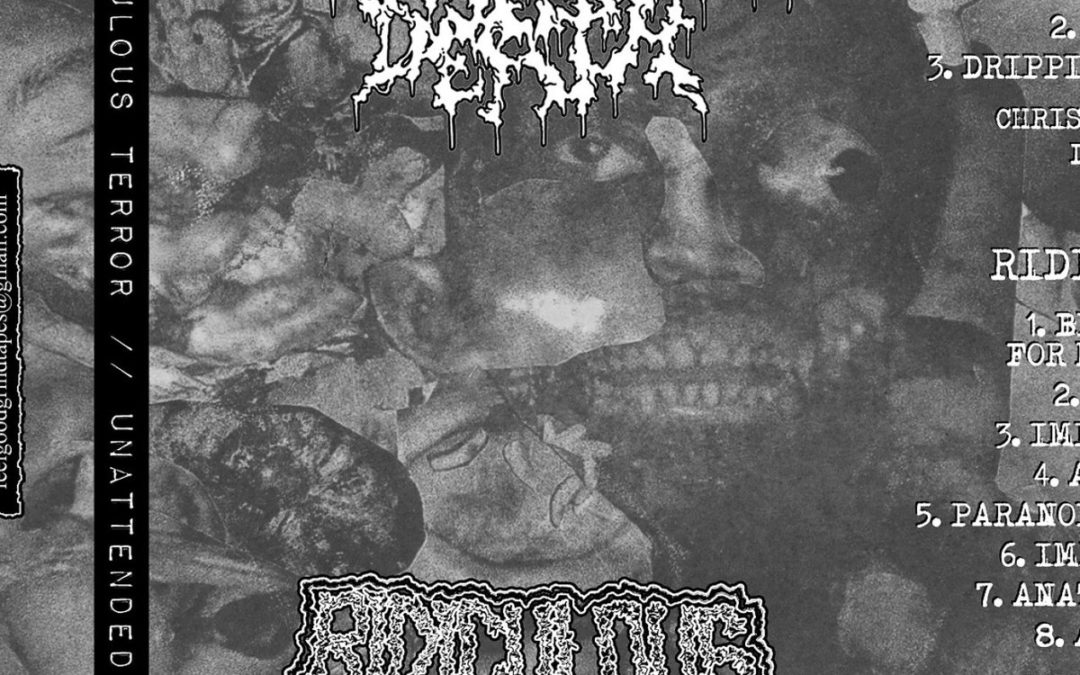 “No frills, no filler; just kills and more killer”

Ann Arbor. Tree city. Hippyville. A land of sunshine and rainbows, where the people are overpaid, overeducated, and utterly milquetoast. Behind the blinding light of a thousand gleaming synthpop and indie folk artists, The Deuce hides a dark and twisted underground of extreme music; punk, grind, metal, noise… it’s here, lurking in the shadows. And lurching into view recently is goregrind solo act Unattended Death. There have been few Ann Arbor grind projects to take it past craigslist jams and into the annals of internet recordings. Some that do come to mind include Shit Life (who HQ out of Detroit to avoid Ann Arbor’s hostility to anything turned up to 11), Texas Prison Rodeo (sadly defunct since the implosion of Ann Arbor’s DIY punk scene), and now Unattended Death. Like their neighbors, Unattended Death is a local anomaly who play some beastly grind, and the city should be glad to have them; even if most of the pearl-clutching, chai-sipping, Prius drivers who live here aren’t.

“SPLIT w/ Ridiculous Terror” delivers just three short but sweet tracks that come together for a knock-down, drag-out good time. It might be fair to say that Unattended Death aren’t treading any new ground here, but it’s remarkable when anything remotely like this makes waves in a town that gave us Ella Riot, Mayer Hawthorne, and Laith al-Saadi. This is three tracks of throwback goregrind with riffage that brings up memories of early Cannibal Corpse, delivered in bite sized chunks I can eat up again and again. “No one calls a forensic investigator because everything’s skittles and rainbows…” an ominous sample is cut short by downtuned, riff-slamming, inward-grunting grind. The first track, featuring James Schuster, stomps its way into your ears and vomits a picture of gore and horror befitting any of Unattended Death’s forebears. “Open the Casket” is the standout of the UD side of “SPLIT”, at once short and multiple kinds of moshable. Split closer “Dripping Through the Ceiling” has a bass tone so distorted I thought it was dark synth at first. It certainly makes for some interesting sfx as UD employ sickly vocal techniques for some of the most daring and memorable parts of the record.

Recommendation – Put the “brute” back in “brutality” with this one-man DIY gorefest.