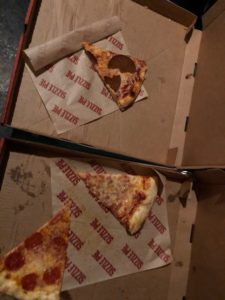 By Saturday, I just couldn’t do it anymore. As delicious as Sizzle Pie may be, I couldn’t bring myself to live on pizza slices for a fourth day in a row. A friend and I popped next door to a Seattle cult favorite Korean-fried-chicken spot the size of a small apartment that’s been featured on Guy Fieri’s TV show. My sandwich wasn’t exactly cheap, and it certainly wasn’t quick, but it was definitely worth everything I went through to get my tired hands on its hot, crunchy goodness. Before I could volunteer to help load in Neumo’s, the social media manager asked me to join a crew she’d assembled to get as many dollar-store beach balls as a wad of $20 bills could buy. Trying to avoid a repeat of Thursday’s “Quest for the Cirith Ungol Stage Clips” that took all evening, we were instructed to avoid all detours and distractions; better to return empty-handed than late. Fifteen minutes later, I was having a Ron Swanson moment with the poor, confused dollar-store clerk. “No, there’s been no misunderstanding; I said I want all the $1 beach balls you have.” Four swollen shopping bags in tow, we returned to the area of operations for the inevitable next task: blowing them all up.

The inflatables were staged on an upper catwalk area where it would be easy to hide them and even easier to throw them into the mosh for the final act of the night. Wisdom from previous years accounted for a bike pump for me and the crewmember from Pontiac to blow up dozens of beach balls, fish-shaped pool toys, and several “congrats, graduate” inflatables because they had them in the store and we had it in the budget. The catwalk also made for an excellent vantage point to watch Closet Witch absolutely destroy a sparse Neumo’s room to open mainstage for the night. Another band shared with this year’s Black Flags Over Brooklyn, I made sure to look up their contact info to share with The Sanctuary folks. Iowa to Hamtramck is a long drive, but I really feel like Closet Witch would be right at home with Sanctuary fixtures Pure Hiss. I was so transfixed watching Closet Witch that I didn’t realize until they were almost through that I had completely missed Shrine of the Serpent down in Barboza. Friends described them as a slow band who play sludgy doom metal, have a common member with Graves at Sea, and used to be called Tenspeed Warlock, which is an awesome name. 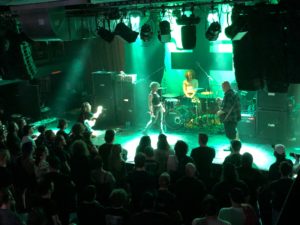 Immortal Bird was next at Barboza, and they’re a personal favorite of mine. I met Rae Amitay briefly while covering Berzerker IV in Pontiac and she was so friendly and charismatic that I would have been a supporter even if the music weren’t as face-rippingly delightful as it is. Immortal Bird played a number of new songs off their upcoming album to impressive effect on the early Barboza crowd. The band had some great merch, too, as always; including several shirts that were NOT BLACK *gasp*. After Immortal Bird carried me off and fed my corpse to their young, I carried myself upstairs for Cloud Rat, a performance I had made prior arrangements not to miss a second of. I’ve written before that I believe Cloud Rat to be the most interesting band in grindcore, and after this year’s NWTF I think I can confidently say they are my absolute favorite band; an accolade I do not bestow lightly. I would be remiss to talk about how memorable their performance was without mentioning the moshing… The pit for Cloud Rat was one of the most active of the entire festival. Maybe I had something to do with that, but I had lots of help. At some point, things got really rowdy and someone got hurt. Stories conflicted afterwards, but the details that seem to overlap from people who saw it happen suggest that a big belligerent guy in the audience shouted something very untoward at Cloud Rat’s singer. Maybe he did it a few times. Maybe somebody hit him. I did see the part where he fell to the ground; knocked out cold. An ambulance was called after Neumo’s security carefully removed him from the middle of the floor, but by the time it arrived, the guy was awake and walking around. He refused medical treatment and left the festival; we didn’t see him again after that.

For their part, Cloud Rat put on one of the best performances I’ve ever seen from them, and I make a point to see them as often as I can. Unfortunately, I was too preoccupied to get any pictures. Downstairs, underground favorites Eight Bells were casting their atmospheric black metal magic over the Barboza crowd, but I couldn’t stay long; I had to work ahead to make room in my evening to see this year’s “folk” performance. Every NWTF, Joseph tries to book a folk or acoustic act for mainstage in the middle of the heaviest day to act as a sort of palate cleanser for the ears. Over a long enough timeline, even the most brutal death and grind bands can start to blur together; it’s important to take a moment for something different every once in a while. As with the previous day around the same time, the Neumo’s crowd got noticeably thin, but Dorthia Cottrell of Windhand played a stellar solo acoustic set for the few keen enough to stick around. Like Panopticon at the pre-party, Cottrell played a mix of rearranged Windhand songs, originals, and covers alone in the middle of mainstage; lit only by white overhead lights. Her performance was intimate and incredibly memorable; many fest-goers, including Austin Lunn, said it was their favorite moment of NWTF 2019. 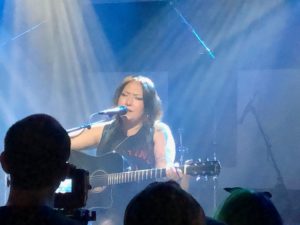 The Immortal Bird/Cloud Rat/Gadget tour didn’t come to Michigan, so I made sure to make it down to Barboza so I could see the international grindmasters round out their NWTF tour date. Gadget sounded absolutely ferocious in the Barboza room, and I admit I ducked out early for fear that I’d overdose on their pure uncut aggression; I knew I needed to keep a bunch of energy for Pig Destroyer later. A nearby sushi place intrigued by all the commotion, came by to offer free rolls to the bands and NWTF staff in exchange for getting as many performers as possible to sign their “who’s been here” wall; I heard later that the owner is a huge live music enthusiast. I ate some of the freshest nigiri I’ve ever had while I made small talk with the various characters on Neumo’s security roster– the kind of people who seem lifted straight out of a comic book. They have names like “Big Swede” and “Viking Tom”. They have face tattoos and instagrams just dedicated to themselves kicking people out. They are the nicest bunch of weirdos on earth right up until the point where you screw up; then they turn into a Saturday morning cartoon.

Speaking of cartoons, there’s nothing on this earth that draws out my inner sense of childish fun like some good powerviolence, and the next mainstage act delivered with a bang. Despise You don’t play out very often; despite existing for as long as powerviolence has, they never played at all before 2007 and it was a privilege to see them at NWTF. After their set, singer Cynthia Nishi and I talked at length about tiny apartment living, hair fashion,  and our mutual love for Lisa Frank. I missed most of Khorada’s set closing the Barboza stage for NWTF 2019 while standing outside guarding somebody’s gear. Big Swede and I kept an eye on the pile of guitar cases while another crew member was dispatched to find their owner. While we were waiting, a random passerby attempted to muscle past Big Swede into the side stage door. Noticing his lack of wristband, security repelled him firmly but professionally. The guy, and I swear this is true, took a pair of eggs out of his pocket (who just has eggs in their pocket??) and displayed them between his spread legs in a lewd gesture while screaming something about “we’re gonna take over the world!!” He ran across the street flailing his arms and bumped directly into four angry Seattle cops who were not amused. Before you could say “did you see that?” the guy had been cuffed and stuffed into a bloated police cruiser. 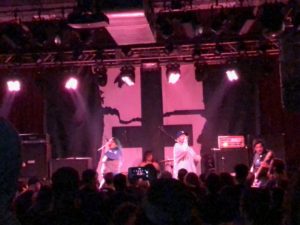 Finally, the time had come for the mainstage headlining act of the festival: Pig Destroyer. I had been waiting for a chance to see them for over a decade; I once drove from Ypsilanti to Cleveland on a work night to see them play with The Black Dahlia Murder only to find once I got there that Scott Hull & co weren’t even playing that night, replaced by Misery Index (still worth it). Here at Neumo’s, I intended to cherish the opportunity with all the emotional weight I would give a cicada brood or a solar eclipse. I rushed to the NWTF merch booth and left my personal effects with them; I’d be back before the end of Piggy D to help them load out to the afterparty anyway. As I dropped the last of my things, the head of festival merch demanded that I be careful; they were relying on me to haul the rest of the merch twice more tonight. “Have fun,” she added, “but be careful!” Heeding her advice, I elected not to stage dive into the fray and instead charged my way in from the back.

By the time I made it to the front, the beach balls were already flowing at full force. Our festival social media manager and a few of the rowdy boys from Wolfbrigade were up to in the catwalks pouring inflatables into the circle pit: “congrats, grad” blow-ups, fish-shaped pool toys, the giant pegasus raft, and yes, the notorious Slamu. At first I’d been unsure whether the second trip for blow up toys was necessary, but once I experienced how a great grindcore pit can be changed by the introduction of an excessive amount of beach balls, I was convinced; it was definitely a good idea. Not so shy about the stage diving antics, Joseph can be seen somewhere on the internet crowdsurfing all the way from the stage to the back of the pit. Having had my fun, I decided to quit while ahead and return to the merch table to catch my breath and make sure they knew I was alright and ready to load out to the Highline. 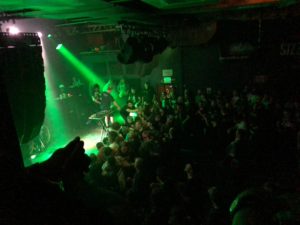 Back at the afterparty, local thrashers Oxygen Destroyer were living up to their name; taking the air out of the room with their bewildering performance. Everything loaded in, I took my usual place out on the patio where an overserved patron was making a fuss about the band. “Those guys in there are SO GOOD,” he bellowed, “and nobody’s moshing! It’s insulting!” If your biggest complaint about the night is that the band was really good, that’s a win in my book. In the interest of transparency, I have to admit that I missed almost all of Bongripper’s set. At the end of four consecutive days of hard work and heavy music, I rewarded myself by throwing in the towel early. I knew I’d need enough energy left over to load out the merch tonight as well as help take down the festival tomorrow. The staff at Neumo’s were very displeased that we didn’t load out all our stuff that night; they had a Christian rock tour coming through the next day (Sunday, of course) and needed all of our things out by 2pm… except nobody would be there to unlock the venue for us until 1 so we’d have to work fast.