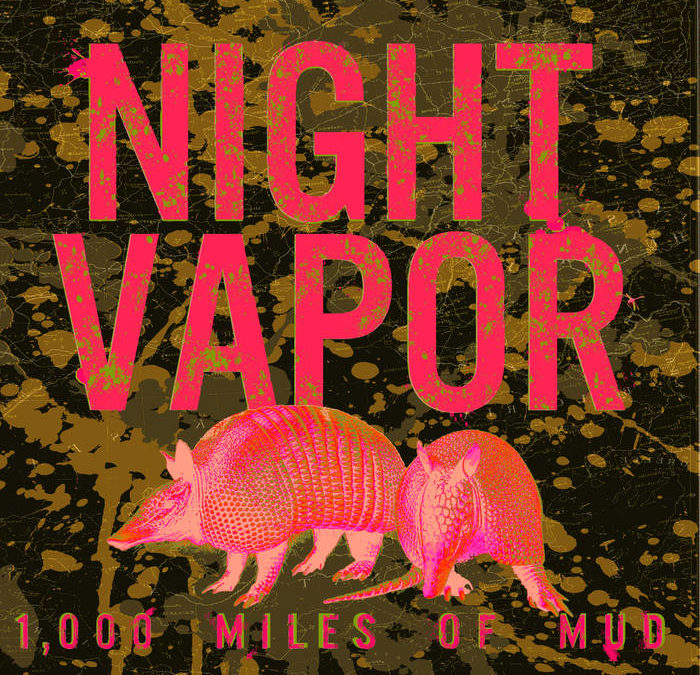 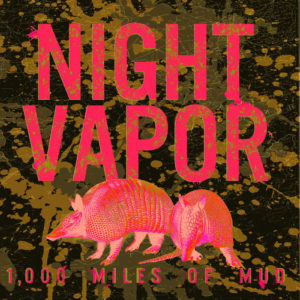 Crawling out of some miles-deep hole in the desert wastelands of the U.S. of A. is noise rock band Night Vapor. Despite knowing what the members look like, I cannot help but see them in my mind as a band of towering, sunburnt men in dirtied flannels and mud-caked faded jeans, face wrinkles individually carved out by the grains of sand and the longest rays of the sun. Probably wearing headlamps, too. This band sounds like they fill the local spot at a dive bar for only the roughest of people located in the middle of some dusty desert.

Released on December 14th by Corpse Flower Records, 1000 Miles of Mud is a sludgy, dirty, experimental rock album sure to rattle your bones and make you want to clean under your nails. I like to imagine that this album is about a lawless alternate universe where Night Vapor plays their music for filthy scoundrels, manipulative sleazeballs, and despicable outlaws. 1000 Miles of Mud opens up with “Dirtminer,” a song that sounds like Nick Cave’s “Cabin Fever” got into a bar fight with Tom Waits’ “Hell Broke Luce.” The clashing notes, sporadic beats, quavering distortion, and chain-smoking vocals surely got them kicked out of many local establishments with the shake of an authoritative fist and a “don’t even think about coming back ‘round here!” Following “Dirtminer” is “Soft Ceiling.” I imagine the fumbling guitar, muttered lyrics, bowing bass, and clattering drums are mimicking some man that tends to always show up to their shows already irresponsibly inebriated.  Sixth song “Hot Head” is the song you hear rumbling the ground as you scurry up to the facade of a crumbling bar, chunks of red dirt bounce to the beat, growing smaller and smaller with each impact. The albums closes out with “Your Daily Bread,” a tune that sounds like a fight is about to break out. The bar patrons are sitting atop their wobbly wooden stools, searching the crowd for a stupid face they can connect their twitching fist to…

Overall, 1000 Miles of Mud is a very fun album to listen to… Especially if you allow your mind to create scenarios for the songs.

Recommendation: Without a doubt, this album is listened to only by the sketchiest of characters (but reviewed by normies like me). With distortion that sounds like a massive drill, drums that sound like guns popping off, vocals that sound like the singer guzzled a gallon of gasoline and whiskey, and basslines that swing and churn like a motorcycle revving up, 1000 Miles of Mud is an album perfect for all you unruly weirdos out there.