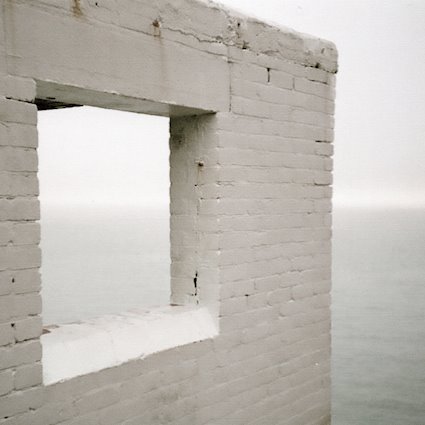 A.L.N. of black metal project Mizmor and ambient/experimental artist Andrew Black have pieced together a record with haunting, immersive sounds that stimulate the imagination; heavy vibrations to dust off what has been set aside for some time. Recorded separately while A.L.N. and Andrew Black were quarantined due to the pandemic, the final result, released November 20th, is made up of two long, mesmerizing tracks. The name of the album, Dialetheia, is the word for a sentence that is both true and false; a true contradiction. A.L.N. has explored themes of existentialism, purpose, and great sadness often with past records, most recently with Mizmor’s 2019 release of Cairn. Andrew Black crafts unique experimental sounds that help to bring forth a great calmness within. A release that combines the two is well-needed, and it comes at a time where true pain, questioning, and unpredictability run rampant. These feelings deserve music to latch onto. The album artwork by Emma Ruth Rundle is an off-white landscape of what appears to be pale waves blending into a hazy light gray sky; a colorless brick structure permits a look through its wall. The quality of a lonely and inhospitable environment follows through with the unconventional tracks the album contains.

Dialetheia opens with the slow-building  “Looking At | Looking Through.” It begins as a subtle pulse that gradually builds with delicate sounds that scatter like rotating pillars of light between all of the various layers of droning noise. Eventually there comes a low, bassy grumble, provided by Jesse Thom, that sounds as if it is reverberating from deep within a cavernous pit. This track morphs back and forth between a moody heaviness and a peculiar soundscape of soft, ethereal, sparkling waves of sound that slowly rise and fall. Just before the middle of the track, a guitar is introduced. Its notes cut deeply into a thick mist to keep from becoming lost among all of the shimmery sounds. The guitar fades out and a crystalline drone takes its place. It climbs and grasps above the deep pulse that has returned. This track is what the world sounds like when below water; dampened noises disorient you as shoots of sunlight slice between the water to glimmer and blind. Near the end of the track there are sparkling, warped piano notes that sound as if they are melting into a warm pool of gentle waves. There is a swirling wind that takes over and swallows all of the remaining sounds and the track fades in on itself. “Looking At | Looking Through” is a pensive and reflective piece, and it works well for the uncertain state the world has come into.

The second track, “Nostalgic Dystopian,” begins with a thick guitar tone that is immediately recognizable as Mizmor’s style. The glum, emotional plucking rings out, and moves in unexpected and strange ways. There is a drone in the background that becomes more and more evident as the piece builds. The untraditional path of notes becomes almost uncomfortable as the background noise becomes more of a high pitched siren. The track has a tinge of horror to it as the frequency of the pitch swirls and gets lost within the reverberation of the guitar’s rumbling tone. Skittering clips of sound twinkle out as the high pitched siren returns with its feelings of great discomfort. Light notes float about in the background, and the guitar reaches notes so low that when they reverberate out as deep thumps they sound like someone rolling a heavy stone across a bare landscape. The wails grow louder and come into the forefront only to then be swallowed back into space. Sparkling music box notes twinkle out with sounds that are equally comforting and unsettling, and then the flickering notes fade.

Both A.L.N. and Andrew Black create songs that hit upon strange and uncomfortable feelings that bring both a sense of peace and a sense of dread. Dialetheia feels like an exploration into parts of the mind that have been long sealed off.

Recommendation: Sometimes songs sound as though they fit somewhere; warmly plucked acoustics nestle nicely among the warm hues of fall, and cold electronic synths bounce between dark alleyways. These two tracks seem to exist nowhere. They are blank, bleak landscapes that hold nothing but a relentless wind that carries upon it sounds that cannot be described; a howling upon some unknown and unseen plane of existence. They are incomprehensible, but deeply felt.

A review of Mizmor’s 2019 album Cairn can be found here.