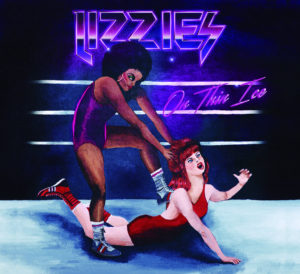 Commercial hard rock, guitar-driven and melodic — that is to say, pure, unadulterated 1980s-style “RAWK” — never really went away. Sure, its purveyors these days are few and far between, with most bands opting to adopt the heavier and faster stylings of the classic ‘80s icons. Hard rock, the most-accessible metal sub-genre that once ruled the MTV and radio waves and filled arenas, has long been waiting in the wings.

Just don’t tell that to the Lizzies. This all-female Madrid-based quartet wears their hard-rocking roots on their denim-clad sleeves, infused with a sizable dose of punkified piss and vinegar. Anchored sonically by the distinctive Jett/Benatar-esque vocals of Elena, Lizzies songs live on the strength of tasteful and melodic (if somewhat low-key) riffs and infectious, sing-along choruses. The undeniable star of this show on ice is Patricia, whose arpeggio and melody-based riffs recall a tinge of ‘80s riffmeisters such as Jake E. Lee or George Lynch.

The Lizzies are at their best when they’re amplifying the tempos and the adrenaline levels several notches. The snotty “Talk Shit and Get Hit” invokes a driving Runaways vibe, while “World Eyes On Me” features truly sparkling arpeggios and vocal melodies in the chorus — alongside fantastic Thin Lizzy-style guitar harmonies. Even the mid-tempo stomper “I’m Paranoid” displays plenty of tasty, palm-muted crunchiness.

That’s not to imply, however, that On Thin Ice is a perfect album or the Lizzies don’t show room for improvement. Perhaps the biggest concern is Elena’s lead vocals. She does possess a pleasant tone, but she needs to work on consistently singing on key and in tune. Also, On Thin Ice overall lacks the metallic power and intensity needed to hold the listener’s full attention for the duration.

Despite flaws, Lizzies do display plenty of rocking potential here — yet another victory for the Spaniards.