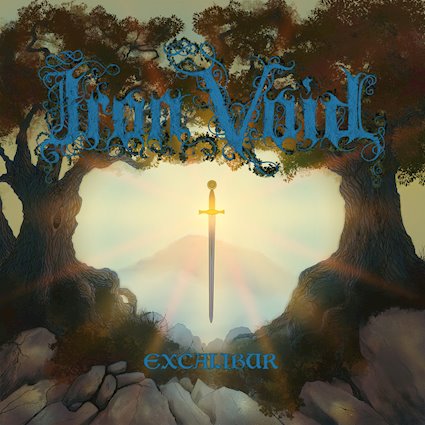 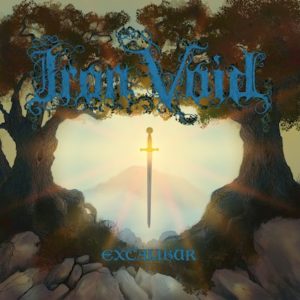 I have always been fascinated with the story of King Arthur and his epic tale of pulling the sword Excalibur from the stone.  Stories like that always have a hero that shows up to save the day and are very uplifting for many. Have you ever wondered what the story of King Arthur and the Knights of the Round Table would be like if told by metal music?  Well look no further. Your search for such a holy grail has ended here with Iron Void. Their doom style gets mixed with the storytelling ability of power metal. Altogether, they have put a brand new spin on the classic tale of the sword in the stone.

There are classic elements of what is needed in both doom and power metal throughout the album.  You have classic power metal feelings. There are solos that make you want to stand up, play air guitar, and bang your head along with the beat.  There are great undertones from the rhythm guitar that make you feel really powerful and full of hope. This will persist for a few songs and you will begin to feel the feelings of King Arthur as he begins his quest as King.  But the story here takes a dark turn. We switch from the power metal grooves we know and replace them with the darkness of doom metal. We go from having happy tones and riffs, to low, dark, and an almost despair-like tone. This switch happens as soon as we hit a song called Forbidden Love.  We can start to feel the heavy toll that is being put on Arthur. There are deep down feelings of darkness and despair in his heart. The rest of the album keeps this feeling of darkness and it becomes more and more of a dirge leading to the defeat of the King at his final battle and travel to Avalon.  It is a much darker tale that I am used to and it is fantastic. There is a return to an almost heroic feel near the end of the album. But there is always that undertone of doom in the songs that is inescapable.

The vocals in the songs are very clean so you can hear the story that they are trying to tell.  We hear about the humble beginning of our chosen King and what he did to become the great king he was in the story.  But the vocals also tell of the feeling Arthur has throughout his time as King. It is a darker take than we are used to.  We all hear the story of Arthur saving people and searching for the Holy Grail. The way it is told here shows how there is very little hope in finding the Grail and less about his great deeds.  We get an insight as to how doubt and the anguish that comes with being a King. They compliment the deep feeling of the music very well with their storytelling elements and clear vocals.

Overall, the music is easy to listen to and creates a great story.  I really liked how Iron Void was able to take their sound and make it a twist on a classic story.  If you don’t know this band, it is a good place to start. I really enjoyed the music and overall tone of the album.  I recommend picking this up in October if you are a fan of something epic.