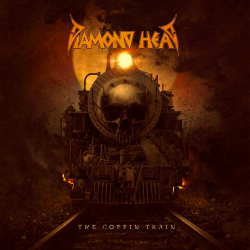 By now, the whole Diamond Head story is beyond legendary. It is common knowledge that a teenage Lars Ulrich once flew from Los Angeles to the United Kingdom just to see an obscure NWOBHM (New Wave of British Heavy Metal) band perform to a few dozen punters in a tiny club. Years later, millions of Metallica fans fell in love with the epic DH ‘banger, “Am I Evil?” — Yes I Am! — and further covers of “The Prince,” “It’s Electric,” and “Helpless” helped to cement DH’s worldwide fandom.

That’s not to imply that guitarist/founder Brian Tatler and DH have merely ridden on the coattails of Metallica’s adulation and promotion. On the contrary, they have toured tirelessly in recent years in support of 2016’s excellent self-titled comeback album, and their 1980 classic Lightning to the Nations remains one of the greatest records of all time. Diamond Head are one of those special bands whose music defies pigeonholing into sub-genres, and each release is anticipated with bated breath by fans. I must add that it is an absolute privilege to publish my thoughts on The Coffin Train, just as it would be for a new release by Maiden, Priest, Iced Earth, or Saxon.

It is no secret that Diamond Head have never been afraid to experiment with their music. Not content to simply ape the competition, Tatler has always written innovative, borderline progressive, heavy-metal tunes. He loves to employ odd time signatures, intricate rhythms, unusual scale modes, catchy choruses, and tasty (so damn tasty it’s nasty!) soloing within fairly complex arrangements. That commitment to authenticity and quality continues on The Coffin Train, an inspired, if somewhat uneven, album that more than holds its own against today’s hordes of old-school copycats.

The Coffin Train steams away from the station with the wicked rocker, “Belly of the Beast.” This rollicking opening track strongly recalls “The Prince” — and that’s a good thing. With its jaunty, syncopated main riff, “Belly…” is almost reminiscent of a big-band horn chart set to distorted guitars; also akin to a good vintage Aerosmith riff. Next up, “The Messenger,” a solid mid-tempo cruncher, features a melodic, intricately-textured intro and a galloping, shuffling, headbanging vibe. The dynamic and dreamlike title track showcases the stunning vocal range of Rasmus Bom Andersen, whose timbre and power recalls the late, great Chris Cornell. His bandmates — Tatler, second guitarist Abbz, new bassist Dean Ashton, and veteran skinsman Karl Wilcox —  consistently display the impeccable musicianship DH fans expect.

Unsurprisingly, they are not afraid to take some chances musically. When it works, such as on the slow-grooving, “Kasmir-esque” “Shades of Black,” it feels like welcome diversity. “The Sleeper, another lumbering cruncher with a Mideastern flair, benefits from some compelling vocal melodies via Andersen. But this train of coffins could have gone without the plodding and monotonous “Serrated Love; Tatler and co. also could have improved the album’s pacing by replacing a few of the other slower tunes with one or two speedy barnburners. That said, video single “Death By Design” is a catchy, up-tempo power rocker that is just what teenage Lars would have ordered.

Oh yeah. That Brian Tatler remains one of the most melodic, innovative, and classiest guitarists in metal and a truly remarkable bloke. It’s Electric, indeed.

Highlights – “Belly of the Beast,” “Until We Burn,” “The Messenger,” “Death By Design.”