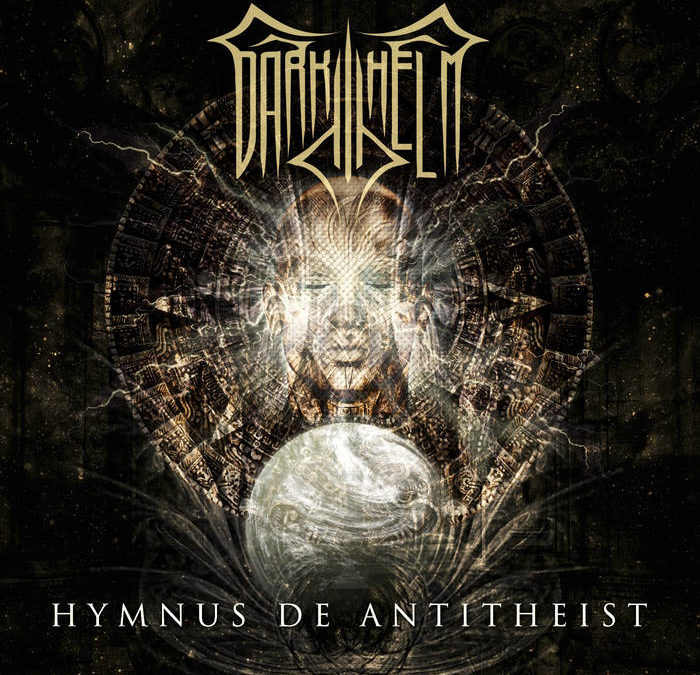 Ah India, the country that just keeps on delivering the goods to the Metal world. I have stated many a time that if you had told me twenty years ago I’d be enjoying some of the finest music in the world and it was coming from the sub continent, I probably would have laughed at you, and yet here I am in total awe of such bands as Plague Throat, Primitiv, Orion, and the always vicious Nekrohowl to name a few, so it came as no surprise to me that Dark Helm may very well have something special to offer. And yes folks, that they do.

Progressive Death Metal it is indeed, although for some reason The Metal Archives has them listed as ‘Middle Eastern Folk/Deathcore’, and at seeing this I got rather confused. Being not the hugest fan of Deathcore, or anything core related at all, this certainly made me raise my eyebrows and just wonder what the fuck I had gotten myself into by agreeing to do this review. Luckily right from the get go my fears were quickly stomped back into the nothing from whence they came. Some may find some core elements present, and for me it would mainly be in the vocal delivery at times, and I do mean only at times, as there are a thousand more useful comparisons to make, so let’s just leave it at that.

So, the basics. A four piece from Pune, in the aforementioned India. First album “Persepolis” released in 2011, and then nothing for seven years until late December last year. What have they been doing? I don’t know, let us just say that they were practicing their instruments really really hard, and as you will see, if that was the case, it has fucking paid some huge dividends. Right from the first track to the last, Dark Helm put on a magnificent display of technical prowess in every area, and can not be faulted. Not even once.

Opener “At Dawn” begins with some truly beautiful keyboard work, almost soothing. The perfect opening for a sci fi movie is what springs to my mind, and yes you can almost see the sun spreading it’s rays across the horizon as it heaves it’s heavenly bulk skyward, bringing light to one and all. Then onto number two “Cilice”, which sets the whole world ablaze. A magnificent combination of traditional sounds and blasting fury, vocalist Dhairya Anand bringing the venom and spite with his roaring delivery, and then just as quickly the song then changes tack completely. Clean vocals fill our ears, in a style that is not at all out of place, meaningless or unnecessary. I am not a huge fan of cleans, but these do not irk me, and, in the whole context of the song, fit well. The comparison are then forming, and they are usually not a thing that I discuss too much, but this time will.

Dark Helm from the start remind me of so much. Bands like Fear Factory and Lamb of God spring instantly to mind, as does Meshuggah, and then even a large chunk of Tool and a small hint of A Perfect Circle, Alkaloid, and many more. They share a lot of similarities with that other Indian powerhouse Orion, who I happen to think are vastly underrated and rank high in my all time faves, who also contain the clean elements, and the raging fury, and combine it all so well. Dark Helm contain the talent and the technical ability of all of these bands, wrapped up into one fucking awesome package. Trust me you will see. Labelling them is a very hard thing, hence the obvious confusion, as I have found just about every style one can think of in our lovely Metal world on display at one point or another, and this is the main appeal in no uncertain terms. Now back to the main event.

Jump to track four “Embers”, and you can find them at their hardest. The bass of Shubhrayu De has the perfect leaden ‘thunk’ about it at is expertly pile drives all around it into the ground, even during the cleaner sections it’s rumble is ever present, and makes those fat, crisp guitar riffs all the more deadly. Mohanish Deshmukh, who handles both the guitar riffery and the keyboard side of things (could get interesting live ha-ha), has a tone as sharp as the finest razor, and slash away he does with malicious execution.

The fifth track “Akasha” brings a more keyboard orientated opening again, with a very eastern sound, before jumping into a more mid paced affair, still full of piss and vinegar, vocals almost bordering on a certain Mr. Randall J Blythe at moments, and still exceptional nonetheless. No, I haven’t forgotten the drummer, his name is Arijeet Mohapatra, and by fuck can this man pound the living shite out of a set of skins, and this song is as great an example of any to show his particular set of skills. And so on it goes.

Track six, “Loss Laments”, has Dhairya flexing his vocal muscles again. The beautiful tone juxtaposed with the gurgling monstrosity that lurks within is simply a wonderful thing to behold. This is a song that truly puts the ‘P’ into progressive, with a pretty damn cool spoken word piece thrown in for good measure. Here the Tool/Meshuggah comparisons really shine through, and yet they are still very much their own band. “Obey” sidles up into your consciousness with some killer low as all fuck bass buggery, and then turns into some sort of slippery beast that is hard to pin down, but remains lead heavy all the same.The keyboard on this one works a real treat as a counterpoint to the manic riffery, and the song chops and changes more times than one can count, and yet it all flows so damn well. One thing has gotta be said about Dark Helm, and that is that as hectic as the thoughts must be that go through their heads, they somehow manage to make it all fit together so well.

“Asleep at the Wheel” sees us drawing to the near final act, and more mystical sounding goodness awaits, followed by the pounding we have so far come to expect from these fine Indian chaps. Just to make sure we don’t forget them real soon, they bring down the hammer with every instrument at their disposal, and lay waste to all our hopes and dreams in one fell swoop. The technicality on display here is just awe inspiring, so much so that they could bloody well go toe to toe with any Tech Death band you care to mention and hold their heads well and truly high.

We end with “Fallacy”, a short, clean, and restful piece, and a suitable way to say goodbye. I am more than impressed by this album to say the least, What began as myself wondering just what the fuck I was gonna write about a so called ‘Deathcore’ album ended up being a really fucking good jaunt through so many different levels of excellence that I can only recommend you at least give these boys a bloody good shot. If you are a fan of any of the bands I have mentioned, or just like to step outside of your comfort zone for a little while, you can’t go far wrong here. Take my word for it, coming from a guy that pretty much eat’s lives shits and breathes OSDM and Death/Doom, I couldn’t make this shit up if I tried.