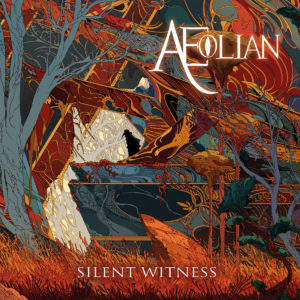 Ahh, good ol’ melodic death metal. Back in the not-so-halcyon days of the 1990s U.S. metal scene, melodic death metal bands from Scandinavia were a big deal. During a time when metal somehow became some sort of four-letter word, bands such as Dark Tranquillity, Soilwork, Arch Enemy, and the once-mighty In Flames ruled the Nordic airwaves. These bands masterfully blended the relentless speed and aggression of death metal with traditional-metal song structures, and the effervescent, sing-a-long melodies of European folk music. This stuff was like the full metal meal deal.

The metal world — including some of the sub-genre’s leading purveyors, such as the aforementioned In Flames — mostly may have moved on from melodic death metal. Just never tell that to Aeolian, not without preparing for a harmonized-guitar jig battle, anyway. This Spanish quintet proudly wears their influences on their sleeves, espousing such high-quality inspiration as Dark Tranquillity, Amorphis, At The Gates, Dissection, and Opeth. Aeolian also liberally incorporates the ubiquitous blast beats and tremolo picking of famous black-metal acts (Dimmu Borgir, Immortal, Emperor, etc.) But mainly, Silent Witness sounds a heck of a lot like In Flames. From the baroque and super-harmonious riffing style, to the folky, jig-like choruses, to Daniel Perez’s Anders Fridén-esque mid-range growls and shrieks, this record should thrill dedicated fans of the Gothenburg sound.

That’s not to imply that Aeolian are merely rote In Flames copycats. The band — also featuring Raúl Morán and Gabi Escalas, bassist Toni Mainez, and drummer Alberto Barrientos — have successfully incorporated prime elements from all their influences. There’s certainly plenty to like on Silent Witness: the production is lush and powerful, the playing flawless throughout, and the songs are as melodic and dynamic as they are fast and pummeling. But the derivative aspects of this album suggest that Aeolian are still finding their mode, if you will. Many of these songs tend to melt into the background due to their streamlined and predictable structure; they also tend to overuse the same key signatures, much like that iconic and much-mentioned Swedish band. This homogeneity, as well as the album’s excessive length (12 similar-sounding tracks) makes choosing standouts difficult, as well.

While Silent Witness may not be a perfect album, diehard fans of classic melodic death metal will eat this one up. Let’s see what the future holds for these talented Spaniards.

Highlights: “Immensity,” “Return of the Wolf King,” “The Awakening,” “Witness.”