Zebulon Kosted – Under An Eternal Mirage Projected In The Sky 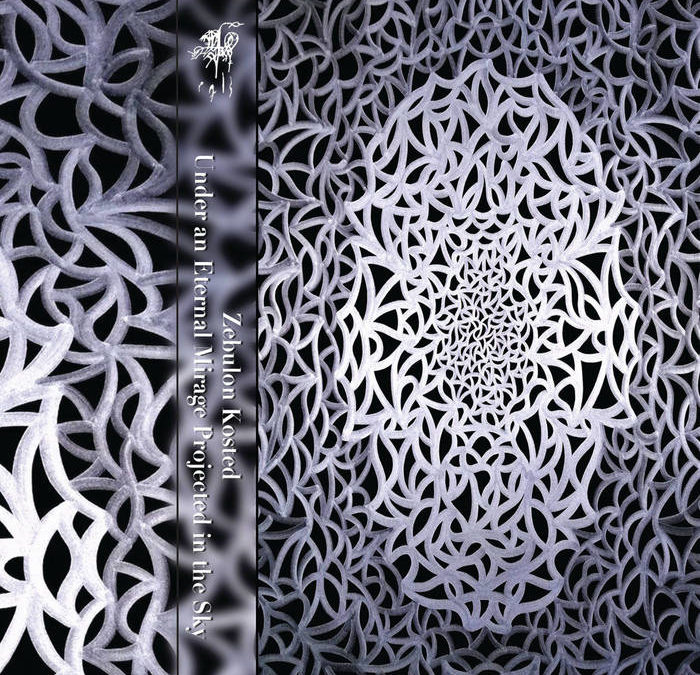 Album – Under An Eternal Mirage Projected In The Sky

Longtime readers of this site will know that we’ve been fans of the king of Montana black metal for a long time. Along with several reviews, I undertook a 20th anniversary retrospective of the project published last winter. I’ve imbibed every Zebulon Kosted release I’ve been able to find. Some I like better than others, but the same thread runs through all. Mastermind Rashid Abdel Ghafur doesn’t care about trends (lots of projects say this…he lives it in his music). He makes the music he wants to make. As such, there are a wealth of influences peppered throughout the massive Zebulon Kosted discography. I’ve typed all of this to lead up to this point: Under An Eternal Mirage Projected In The Sky is the best thing I’ve heard from this project. That, of course, is my subjective taste, but this release hits me hard with each listen. I love it.

Track one is entitled Under An Eternal Mirage. On this track, ZK dredges up all the nastiest elements of black metal and weaves them, with some flavorings of doom and noise, into a potion of vilest power. Blistering sections of dissonant blackened chaos descend into doomed out portions, almost funeral in their feel, if not quite their pace. In some ways, parts of this show ZK in a more traditional black metal light than usual, but when taken as a whole, the near twenty-five minutes is as strange as anything he’s done. The track is like one of the forest fires currently burning out west, ebbing into ominous embers, before a shift of wind causes it to burst forth again in malevolent fury. Absolute devastation.

Projected in the Sky follows, wrapping up the album in a suffocating gauze of drone. If track one shows ZK (kind of) at his most traditionalist, this second twenty-eight minute offering leans entirely the other way. In no discernable sense is this track black metal at all, though it somehow fits perfectly with the prior track. If I may be allowed some creative license in my own interpretation of what I’m hearing, the listener has perished in the forest fire of Under An Eternal Mirage and Projected in the Sky is what comes next, whatever that is. I can’t be more specific than that, as I don’t pretend to understand this track any more than I pretend to understand what comes after death. I do claim that the track makes me feel something real and visceral, both unsettling (though perhaps not quite ominous) and beautiful (if not quite peaceful). When done really well, as most is not, I love a long drone track. Such a track transports me into the other, the ether of the subconscious. This track is just such a one.

On paper, the idea of an experimental, dissonant black-doom track followed by a drone track, with the two lasting over fifty minutes, sounds like it should not work. Don’t believe it. This album is immense, cathartic, and otherworldly. All hail the king of Montana black metal!