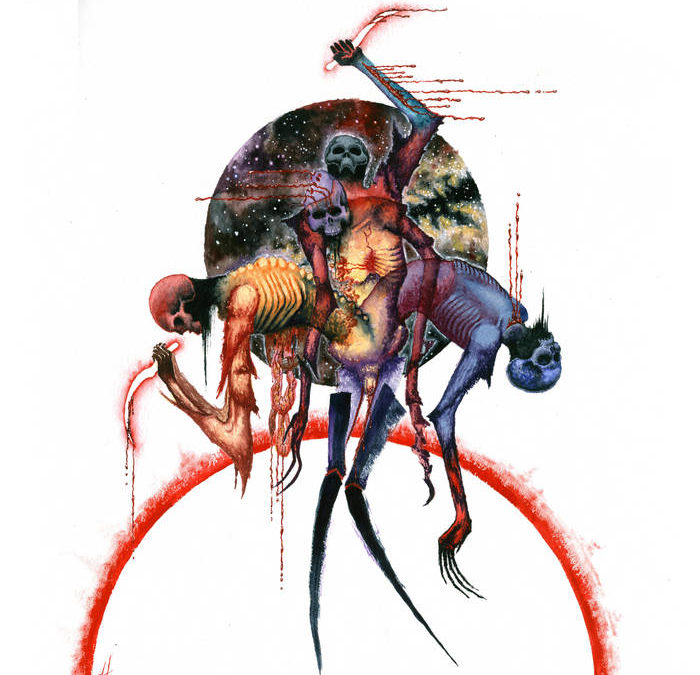 Atmospheric Black Metal band Ashbringer creates albums of psychedelic splendor that take their time to unfold, draw the listener in, and take them on a journey. Band composer Nick Stanger recently revealed a side project he has been working on during this unprecedented time period of quarantine, and it is the exact opposite of all that. With Immortality Through Quantum Suicide, Xythlia looks to reach into your being, rip your soul away, and tear it to bits. As he put it “This album serves as a good response to the question ‘how have you been?'” and the answer is quite clear.

Right away the first track, “Death Unyielding”, comes out with full aggression. Drums pound relentlessly, guitars squeal and the vocals shout with unrestrained hatred. True to the “grind” suffix, it ends almost as abruptly as it begins and no time is wasted, before diving head first into the next track and continuing forward through more maniacal chaos. The insanity only briefly relinquishes control and slows down for less than a minute on instrumental track “Antidream” leading into “Ablation of Subconscious”, before it quickens into further abstract assault through the next several tracks. Guitars here sound warped and are laden with effects to really nail down the crazy tone. Vocals are raw vehement screams. The drumming is programmed and notably inhuman, but that only serves to further the demented character of the album. This is a staggering display of technical dexterity delivered as a constant surge of emotion through noise.

One need not think long about the mental state Stanger was in while recording this material. It sounds like a stream of consciousness delivered in musical form. It’s ludicrous, anxious fervor that is performed with an unparalleled intensity and crafted proficiency. Take thirty minutes out of your life and journey into the nether, you won’t regret it.