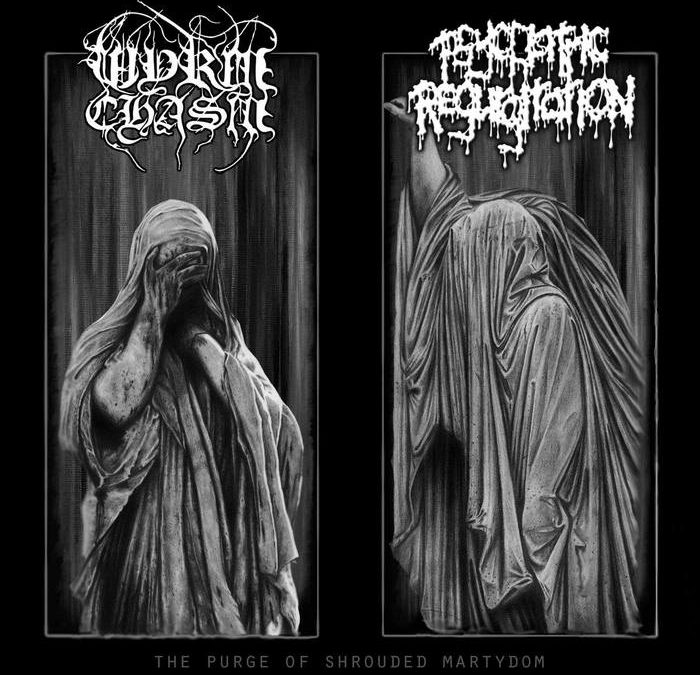 Album – The Purge of Shrouded Martyrdom

Splits often occur between two bands which play a similar style of music. A second approach, which seems to happen less often, but still fairly regularly, is to combine bands from a similar area. Such is the case here for these two projects based in Dallas, Texas. The location must be the draw, as the styles are different, except in the broader sense of both falling in the extreme music wheelhouse. In fact, as an added bonus, there are some shared members between the band, at least according to Metal Archives.

The split CD starts with Wyrm Chasm, so I will as well. Across three tracks, with the middle one fully instrumental, the quartet plays some top notch USBM with some progressive tendencies and a bit of death metal influence (especially in the case of the complimentary vocals) for added flair. The riffs are quite strong and hold the interest well, very sharp and cutting. The bass rumbles are pretty low in the mix, but not compared to a lot of the black metal world. The drumming is solid, holding the rhythms strong and hitting the blasts as needed. The vocal attack is generally speaking a higher pitched rasp, with the aforementioned secondary vocals taking the form of a lower growl. This side is quite engaging and enjoyable, well worth the initial visit and subsequent re-visits both.

The second half of the CD features Psychiatric Regurgitation, listed as Death Metal and Goregrind according to Metal Archives. I would take issue with the latter designation, at least for this release. Across the three tracks here, this duo shows themselves to fit the death metal mold, with more than a heaping helping of black metal influence, proving that both reasons for having a split in the opening paragraph are apt in this case. Broad, sweeping compositions are characterized by a variety of dynamic guitar styles, to the point of being somewhat atmospheric and progressive both. Excellent riffs carry this side forward with strong support from both beastly bass and manic drumming. The death growl carries some urgency in it’s rasp, which is all to the good.

Both sides of this split are consistently good, I suppose if I had to choose, I’d give the Wyrm Chasm split the edge, but that is based entirely on my own bias towards black metal as a genre versus death metal. Honestly, I’m glad I don’t have to choose. I can sit back and listen to both.