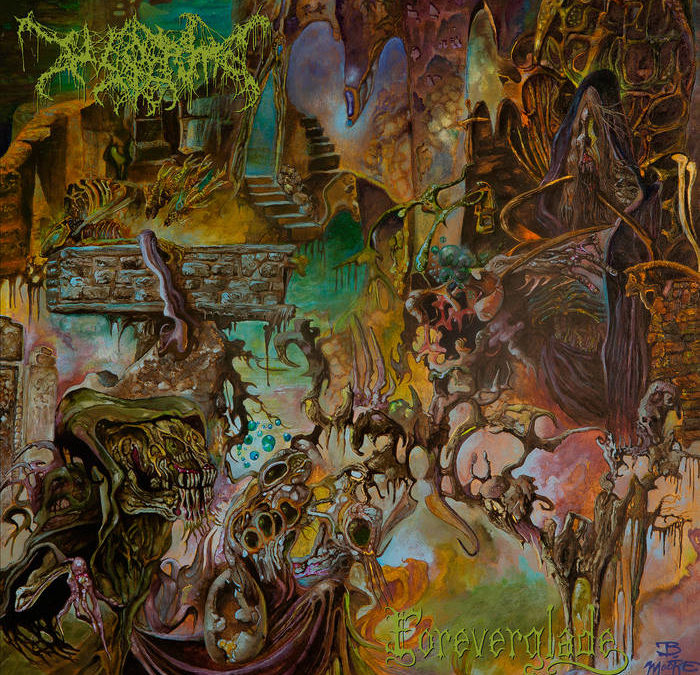 Talk about a fourth quarter surprise! Worm’s Foreverglade has been one of my most anticipated releases of the year since it was announced a few months back. The previous album, Gloomlord, ranked among my favorite releases of 2020 and I still feature it on death/doom playlists or use it as an example of great modern death/doom. But does Foreverglade hold a candle to its predecessor? Can Worm continue to experiment with their blackened brand of Disembowelment type death/doom? Let’s find out!

The album’s opening track, “Foreverglade” sets the tone for the rest of the album. Shimmering clean guitars overlay heavy chugging riffs while gurgling growls and anguished screams transport the listener to what can only be described as a hell swamp. The tracks naturally transition between crawling doom passages and groovier, more traditional death metal segments.

The second track, “Murk Above the Dark Moor” follows a similar template. The black metal influence on this album cannot be understated, something that makes this band very appealing to me. Worm does not shy away from heavy synthesizer usage to add an ominous atmosphere to tracks. The lead work on this album is stellar. It reminds me of mid era Morbid Angel but more melodic. The outro solo on “Murk Above…” is shred and sweep city, something I really enjoy over slower music.

“Cloaked In Nightwinds” is probably my favorite track on the album. It begins with a crushing mid tempo section before devolving into an incredible heavy, synth soaked dirge featuring mournful incantations. Coming in at eleven minutes, it’s the longest track on the album and like any good death/doom song, it does not lose the listener’s interest. The track is dynamic, constantly shifting between slower and faster tempos before ending on a slow trudge.

Side two brings more of the same. The side begins with the single, “Empire of the Necromancers”. This track really highlights more lead work from Nihilistic Manifesto, who is credited as the album’s lead guitarist. The track maintains a more midtempo feel throughout, but it still has a very doom feel to it. “Necromancers” transitions very nicely into the album’s interlude track, “Subaqueous Funeral”. This track features more beautiful guitar work and a multitude of textures, from clean guitars, prominent basslines, and again, more guitar solos right out of the Trey Azagthoth playbook.

Before I jump into the last track, I would like to talk about the production on this album. I think it’s fantastic. The guitars are very prominent and mixed nearly perfectly. I will say, I wish the rhythm guitars were a little louder at times, but that’s just me. The mixing between the clean guitars and the distorted ones is very nice. It doesn’t feel like they are competing to occupy the same space, rather the clean guitars are hovering over the distorted one, adding to the creepy feel on the album. I haven’t really mentioned them previously, but the drums sound absolutely incredible on this album, the kick and the snare specifically. I really love an album where you can hear and feel the kick drum and on an album that’s pretty slow, hearing those quick kick drum triplets is always nice to break up the slow sections.

The album closes with an absolute banger of a track. “Centuries of Ooze” is probably the heaviest song on the album. It’s probably the most dynamic track on this album, equipped with blast beat breaks, clean guitar breaks, and closes out with clean vocals. The cymbal work on this song also should be noted as well, as the drums on this track vary between styles more so than any other.  The track ends with a My Dying Bride style of riff, more straightforward and heavy with choral vocals over it.

So, does Foreverglade compare to its predecessor? Yeah, I think it does. I think the mix of this album really helps it stand out, especially when death/doom has had a resurgence in the last few years. And while the album does have its shortcomings, namely a lack of diversity among tracks, I think that good riffs and great production don’t let those shortcomings detract from the overall feel of the album. I think this album will certainly be in a lot of people’s top ten albums for the year, I know it’ll be in mine.

Biography:  Rz is the main musician behind New Jersey atmospheric black/doom band Varanak. He formally ran the (now defunct) Iron and Doom music review page on Instagram. Aside from writing music and reviews, Rz enjoys finding new music across all genres, working out, and exploring the culinary world.