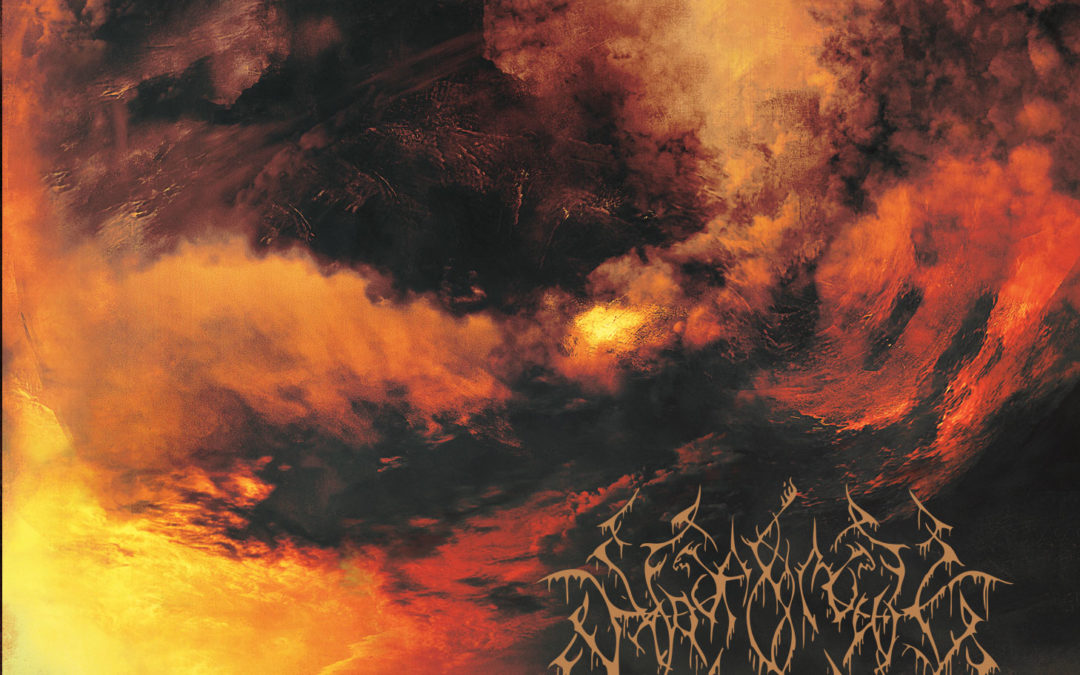 It is difficult not to draw parallels to fire when considering WARDAEMONIC’s upcoming album Acts of Repentance. Just as the horrific and tragic wildfires of human error and folly engulf the vast areas of the continent and environment, so too does the release from Australia’s battalion beast threaten to destroy all in its path. Notably endowed with cover art depicting a massive, infernal, storm cloud of flame and smoke, the figurative contrast is that while reality is tragically earthbound and material, Acts of Repentance exhibits an inferno which is supernatural, audibly from above, fittingly daemonic.

While any one of the blistering aspects on display here could be of primary regard, what is most apparent is the absolute ballistic assault from appropriately-pseudonymed drummer and vocalist Maelstrom. WARDAEMONIC is undoubtedly aware of the devastating percussive impact, as we find the drums loud and atop the clean, well-produced mix, punchy and relentless, a near continuous steamroll of unfurling incineration. The vocals themselves, supplied by Maelstrom and co-guitarist Lord Bane, aren’t far behind, devouring the very air with an almost hardcoresque, blighting cadence and an unmistakably black metal tone. The dual guitars, courtesy of Lord Bane and Anharat, similarly lash out with distinctive sweltering abandon, with the castigating rhythm and cyclonic, audacious lead seethe intermittently and swap out like licentious firewinds off of the glowing mass of Blitz’s molten basslines.

It is noted that the shortest track length on the album is just over seven minutes, with the longest clocking it at twelve plus. Not terribly abnormal for black metal in general, however with this style and intensity, it does raise an eyebrow, bearing in mind that similar releases from comparable peers (see below) have songs that average around four to five minutes and usually max out at six or seven. What it suggests, and what the album in fact bears out, is that there is more going on here than just straightforward pummeling, even though that is clearly the foundational timbre. Despite what first seems to be an unremitting onslaught, more attentive listening reveals interesting examples of smoldering nuance amidst the cataclysmic barrage: elements of contemplative variances, meditative interludes, and even… yes… sparks of beauty.

The headlong raging technical assault of “Act I, Introspection” is slightly more tempered in “Act II, Admission” wherein the dual vocals get a little more breathing room and there is more of an emphasis on melody. “Act III, Castigation” is the twelve minute track, which begins relatively leisurely and progresses through a groove-heavy intro, before igniting in scorn, intermittent volleys of blasting double kick driving insidious, almost droning riffs, with some brief clean chanting vocals, a transient ambient interval, and a violent finale. Perhaps the most avant-garde of the bunch is “Act IV, Sufferance” which features several instances of downright epic clean chants and explorative lead riffing amid the fray before settling for a nice acoustically accentuated outro. We come full circle with “Act V, Repentance,” which largely picks up the boldfaced ruthlessness right where “Act I” left off.

All in all, with this release, WARDAEMONIC stand toe-to-toe with some other huge names in the genre, particularly those with the capacity and reputation for brushing up against the very limits of percussive speed… Hellhammer, Frost, Dominator, etc. Thus, while there may be important differences in terms of detail, album structure, and production, Acts of Repentance sits solidly alongside the works of modern MAYHEM, Hellfire-era 1349, the blastiest MARDUK, as well as the somewhat lesser-known (but excellent) NORDJEVEL, NEGATOR, and the latest release by NOCTEM. Needless to say, while the flames of Acts of Repentance have their moments of beauty, ultimately what is left in the wake is naught but scorched earth.

Biography:  Ivan is the chief admin at Order ov the Black Arts and guest reviewer for MoshPitNation and Black Metal Daily.