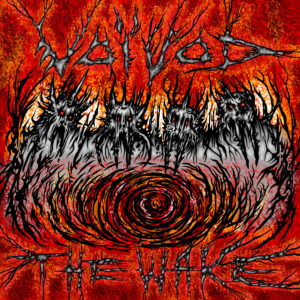 I’m just going to open by saying that my portion of this review will be, undoubtedly, a gushing fanboy post. I was 14 or 15 when a friend at school introduced me to Rrröööaaarrr. I was immediately hooked. From that point on, it was clear to me that Voivod is the greatest band to ever hail from my home country (apologies to all prog fans everywhere, but I stand by this opinion). The band has taken many an interesting path over the ensuing years, but never a misstep. Every album is gold in its own way. All of which should suggest the level of excitement I felt to open the email that promised a promo copy of The Wake….only to find it had a technical glitch and the album couldn’t be downloaded. After a day of waiting with bated breath and much gnashing of teeth, a second email arrived with the problem corrected. Phew! Life could go on.

I suppose it’s time to talk about the actual music. For much of that, I will direct you to my co-writer BingGan, who I dragged out of semi-retirement to share his much more coherent take on the composition and playing found on The Wake. You see, he is a musician himself, and a lifelong prog fan. I am neither. To me, the album is darkly upbeat. There is plenty of energy with a plethora of twists and turns to keep it interesting. I’m enough of a fan to recognize that it is a prog rock record with occasional forays into metal. And it’s magnificent. As is to be expected, I’m in love with it. Read on below to learn what Voivod has actually done from someone with some actual musical competence.

As Hayduke mentioned above, we are truly drawn into the realm of prog with this compelling Voivod release.  Most striking are the dense chord voicings and acrobatic melodic lines, which challenge expectations when it comes to “hum-ability,” so to speak.  These are intense, musically rich arrangements which will intrigue muso-types (like this reviewer, full disclosure) but also enchant those simply entertained by the rich tapestry of sonic candy that tonally adventurous music can provide.  Progressive rock may also start us counting on our fingers to try to figure out odd time signatures like 5/4 or 13/8, but the rhythms here–despite frequent feel changes–are more primal, the band leaning heavily on driving, pounding beats in the more common 3- or 4-beat time.  Ultimately, this music is challenging enough to delight prog fans who are willing to pick up a guitar and learn some of the riffs, but the churning rhythms and electrifying aural landscape are bound to appeal much more broadly as well.