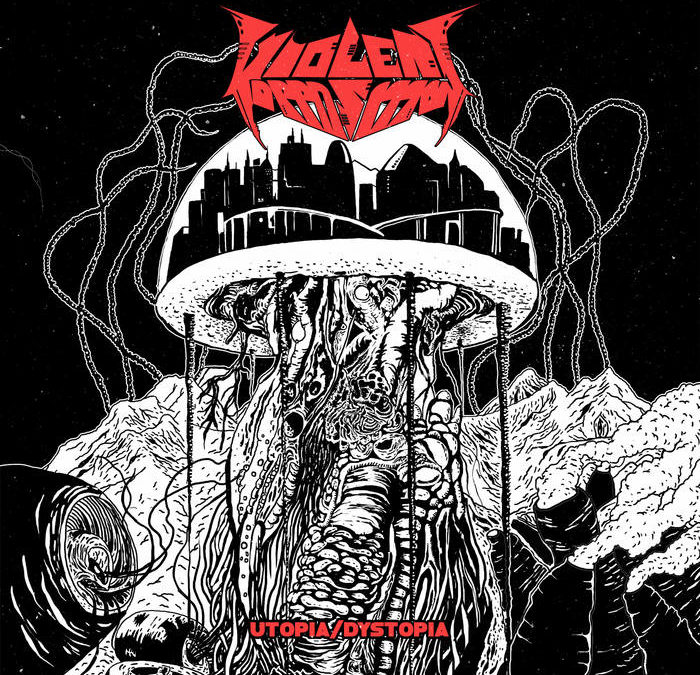 Let me start by giving credit where credit is due. Though this album was originally self-released (which is the date given), then picked up by Selfmadegod Records, I received the physical cassette to review from Dead Red Queen Records, a label I only discovered last year through the Malevich release. The label has turned out to be really excellent, both in terms of building a fast and easy working relationship, but also in terms of both the physical product being produced and the quality of the music involved. The cassette I received was a joint release with Stand Against Vivisection.

Let’s talk about the band. Violent Opposition, according to the Facebook page, is currently one guy, Damian. By my count, seventeen other people are listed as having been involved with the project at some point or other, though no details are given as to release…only what their role was. The liner notes of the cassette also suggest that Damian did everything on this particular release. To that I say, bravo! I would not have guessed, especially with the spastic dual vocal attack, that this was all one individual.

Utopia/Dystopia is a wild ride, spastic and out of control from start to finish. The album certainly features elements of grindcore as I know it. The speed and mania and sheer passion of the album check all the grindcore boxes for me. I included fastcore, a genre I don’t really know how to distinguish from grindcore, because that’s what Damian has in the About section of the Facebook page (both are mentioned). There are also rather strong free jazz elements, which progressions and tempo changes coming out of left field in many unexpected ways. Rhythms stop and go on a dime. The playing is incredibly technical and absolutely on point! As is necessary for this style, the production is crisp and clear, allowing the listener to experience everything.

On this release, Violent Opposition does an incredible job of riding the line of technicality. Far too often these days, bands choose technicality over passion. Damian chooses both. Utopia/Dystopia makes me feel out of control, off balance, angry, lost, belligerent, and more, all at once. In fact, if this album didn’t make me feel so much, I would probably hate it. Because it does, I absolutely love it.

One final note, namely a quote from the Facebook page, under Band Influences:

Full solidarity with this message. These are the kinds of interests I find important too. Now go get this album!