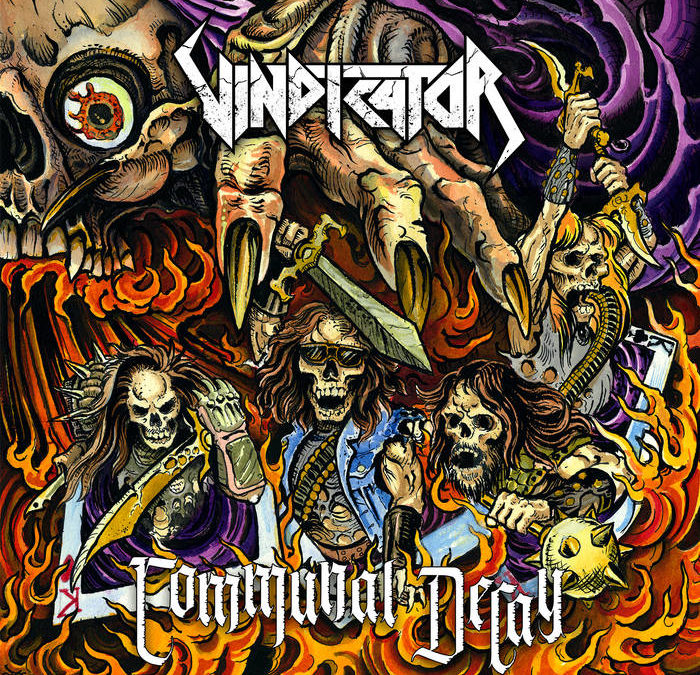 Here is an interesting fact. Vindicator, Thrash band extraordinaire of extreme excellence come from Cleveland, Ohio in the good old United States of America. I was discussing this the other day with a friend on social media, and he assured me that if you say “Cleveland, Ohio” three times in a row Drew Carey will appear in your bathroom mirror and give you advice on just what kind of spectacles you should be wearing according to the shape of your face. I did not and still do not believe him, but I have mentioned the place twice now, and am not game enough to say it one more time JUST IN CASE. Times are hard enough without washed up comedians commenting on how we look and making us feel worse…Ha-ha.

Speaking of spectacles, holy snapping duck shit do this band know how to make an album cover that grabs one by the old fashioned Metal (Thrash ones of course) short and curlies. The minute I saw that alone, my inner 14 year old screamed at me  “YOU MUST HAVE THIS.” After all, I bought several Lȧȧz Rockit albums and others back in the day purely based on the covers alone and did that go in any way wrong? Well, let’s leave that for another conversation we could call “Oh lordy why did I buy this awful piece of shit,” for now okay? Nah, this one has it all. Skulls, fire, mediaeval weaponry and long haired undead dudes etc.  Do I need to say more?

Well, yes, yes I do. I need to talk about the music do I not! “Hymns of Oblivion” kicks things right in the balls with style, with a guitar tone and vocal delivery that Evile would be proud of, and Lars Ulrich would probably want to put higher in the mix so as to drown out the bass. The good news is that Lars is probably off buying another painting of some young French lad in a blue school uniform, and the underlying rumble of the previously mentioned instrument is well and truly on display for all to hear. Justice for all? Yeah right mate ha-ha.

“Oxidative Stress” launches itself with the sound of thunderous pounding drums and percussion type thingies, I dunno I am not a drummer, and a truly shredding riff pattern that made me wish I still had long hair and an axe to grind. Although an instrumental, this is the kind of thing that the Metal world needs back. Remember when just about every Thrash album had one? Am I that old? Shut up you lot up the back there, I am allowed to reminisce am I not?

“Life Support” then tears you a brand new hole with a mix of flat out aggression and more tempered chugging moments of batshit insanity. These guys have been around for a while (as many of you may well know) and seem to have absorbed quite a bit of music over the years, whilst still putting their own slant on what they give back to the Metal community. Vocally I get confused as to just who to compare them with, and that is a good thing. One minute Sean from Vio-lence springs to mind as the delivery can be somewhat off kilter, but we all know how much we love them. The next maybe an Evile moment as previously stated, maybe even Kurt form the legendary DRI, perhaps some Paul Baloff with a smaller tennis ball rammed down his throat. Hard to say, but it fits like a spiked mace to the side of a soon to be splattered skull, and that is all I care about.

One final mention song wise and delivery wise if I may. When “Poison In Us” kicked in. I dead set thought I had accidently swtiched to a Voivod album. Now if that isn’t one of the finest compliments you can ever give a band, you may all kiss my lilly white arse.

This is fucking fantastic, and you need it, and that is all there is to it.

(No washed out comedians were hurt during this review, and as for Cleveland,Ohio, I wish the city well…)