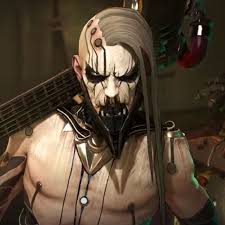 Hard to believe it’s been four years since Doom 2016 came out and brought metal back into the gaming world. It’s sequel Doom Eternal cemented the fact by featuring a metal scream choir and just being overall awesome. Although the ripple effect has been apparent in the PC market with classic shooters with metal soundtracks charting on steam, the same can’t be said of the console market. Microsoft‘s Xbox in particular seems to have an allergic reaction to metal. But there is a ray of hope in the black metal inspired character of the Microsoft exclusive game Bleeding Edge… Nidhoggr!

Bleeding Edge is a melee-focused team shooter in the vein of Overwatch with a melee twist, but we won’t be doing a review of the game. Today we look at Nidhoggr and his representation of metal in video games. First off, all the characters of Bleeding Edge are augmented, so there’s the literal metal, now onto the trve metal!

What did they do right? Nidhoggr takes his name from a dragon/serpent of Norse mythology; so far, so good, so metal. Now I’ve gotta say they really nailed the look. From the corpse paint to Nidhoggr’s ax being both a literal ax and a guitar ax, the character design is something out of your most epic black metal concert fantasies. His special moves are pyro based including a breathing fire move that reminds me of classic Immortal music videos. Overall, the character design shows a lot of care and attention to detail and you have to admire the effort.

So what is keeping Nidhoggr from reaching TRVE KVLT status? The music itself. When Nidhoggr enters an idle animation he starts playing his ax, and his music is more in line with Megadeth than Immortal. Oof! All that care and attention put into his character design and he gets saddled with some bargain bin heavy metal as his theme. To add insult to injury one of his other moves is a death growl that stuns enemies, BUT the scream is so over-processed that it almost sounds like one of those deep sounds used in dubstep. Yeah, it’s kinda cringy.

Bleeding Edge was developed by Ninja Theory who was bought by Microsoft during the development cycle of the game. Though not confirmed, it’s very possible that executive interference is to blame for such an authentic-looking black metal character having heavy metal music attached to it.

While some might want to cry out that this is an insult to black metal let me stop you for a second. Keep in mind this game is a Microsoft exclusive title, produced by the big M, and the fact that they are giving metal a nod is a positive thing considering the history.

I remember playing Halo 2 and listening to the Mjolnir heavy metal version of the halo theme and teenage me thought it was the most epic part of the game. I’m pretty sure that aside from a hard rock highlight occasionally sneaking into brief key moments of the Gears of War series, that’s the last we heard of metal in video games. There might be exceptions. I haven’t played every Microsoft brand game in existence, after all.

Halo 2 was released in 2005, the same year GTA San Andreas’s notorious hot coffee mod was discovered. Shortly after that, video games were brought to court for “corrupting the youth” and the six years post-Columbine world was more than happy to drag violent music and games through the city streets once more. While metal and violent video games continued to be successful industries on their own, they managed to keep out of each other’s reach for the next eleven years (indie game developers being the exception).

What I’m trying to say is this is progress, and bringing violent music back to violent video games is going to take baby steps, considering the history of both being dragged into court for “corrupting the youth”.

If there’s one thing the DOOM series has taught us, it’s that metal and violent video games go hand in hand. Throw in that indie metal shooters are currently the top sellers on Steam, recent studies prove video games and metal both reduce violent tendencies, and Nidhoggr is one of the most popular characters of Bleeding Edge, and it’s easy to see that the worlds of metal and video games will experience a renaissance in the near future.

Love him or hate him, Nidhoggr is a good sign that Microsoft is changing their tune and is a herald of things to come. Maybe we’ll hear some death metal in Gears 7 or something. Who knows?

So grab a controller and I’ll see you in the arena!