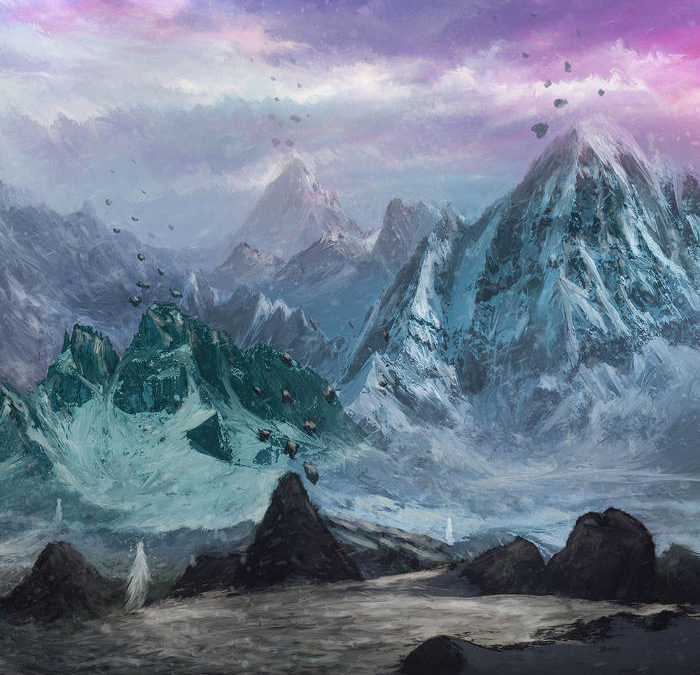 From the appropriately frigid region of Ontario, Canada comes UNREQVITED, and a new winter-oriented album entitled Empathica, the fifth full-length release since 2016. Each album possesses its own particular flavor, and several releases are composed of ambient offerings only, but as for the full length albums, this anonymous composer consistently pushes the boundaries of what can be considered black metal proper, and typical descriptors such as “melodic” do not even begin to describe the immaculate, celestial magnificence of UNREQVITED’s God-tier blackened cinematic atmosphere.

“Empathica I: Heart of the Spectral Mountains” begins this winter journey. Brimming with noble medieval essence, this is an “instrumental” track, so labeled because it lacks the idiosyncratic vocals and blackened aggression to come. Subtly martial pacing, whistling of mountain winds, and synth creating a surreal Atlantean timbre similar to GRAVELAND side project LORD WIND, a sound that isn’t particularly typical for UNREQVITED, but isn’t entirely foreign either. “Empathica II: Everwinter” follows, melancholic acoustic guitar, lofty choruses, and easy percussion repeatedly building skyward towards precipices and then cascading over into characteristically massive, widescreen waves of brilliantly layered synth, soaring guitar lead, and distinctive, dejected screams, the song finally concluding in some perfectly utilized double kick. The harsh vocals of this project are necessary to address: they are always removed from the forefront of the mix. In the cosmic/oceanic masterstroke The Stars Wept to the Sea (2018)(which cannot be recommended enough), they have the impression of being submerged, at times barely audible above the surface grandiosity; here, however, they are tempered in a different way, not submerged but… distant, as if echoing from aloof vistas. “Empathica III: Innocence” is no less wonderous, but feels less expansive and more intimate, almost subterranean, but in the most magnificent way possible, like traveling through an immense, crystalline cave. Multiple clean vocal threads and synth that seems to mimic brass (trumpets perhaps) are distinctive features of this track, the steady pace carrying the listener through wondrous, cathedralic cycles of the aforementioned buildup and powerful catharsis.

“Crystal Cascade” is aptly titled, for instead of following the more typical formula of buildup-and-release, it begins at full speed, percussion and chunkier riffing at the forefront of an immediate, epic, and (relatively) aggressive symphonic onslaught. The reprieve is heretofore unheard synth tangents into 80’s sci-fi film score territory (reminds me a lot of the theme for Netflix’s Stranger Things), supported by swelling orchestration and fade-out into calming guitar, piano, and rain. “Snowspirits of the Arcane” is a nocturnal interlude which gives off a mysterious, unsettling, almost creepy vibe and always sort of feels like its building towards some sort of apex, but never really gets there. “The Permafrost”, however, does get there, starting off with an optimistic piano/synth/percussion combo that begins to turn a bit uneasy and apprehensive before exploding into a deluge of careening, doom-heavy progression with wailing synth or guitar (I can’t quite tell which), anguished cries, and welcome steady double kick. The finale “Dreamer’s Hideaway”, unique in that it features what sounds like xylophone, slowed piano, and a solitary clean voice, gives the impression of an isolation that is sad, but which also emits a sense of peace, safety, and even wonder to close the album.

All told, Empathica is an exercise in radiant winter surrealism, a display of shimmering, brilliant soundscapes both pristine and vast, harnessing the particular elevating, epiphanic sorrow that only UNREQVITED can materialize.