TRACK STREAM: The Sombre – My Betrayal As A Knife 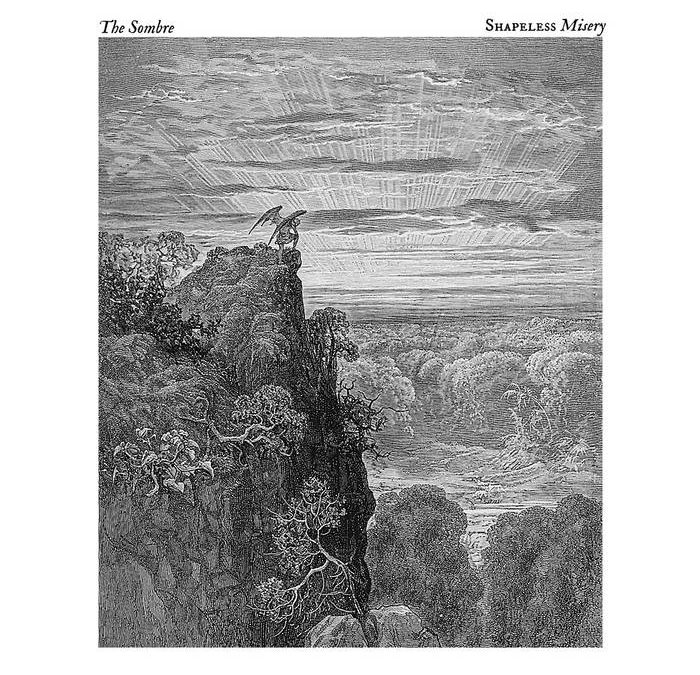 In partnership with Brucia Records, we are proud to present My Betrayal as a knife, the second track from Shapeless Misery. The album is the second offering under this name by the prolific and multitalented Maurice de Jong. Calling forth the music of his earlier years, de Jong puts his own spin on the familiar death doom style. Give the track a listen, then proceed below the player for my full review and an interview with the man himself.

Desperation. Hatred. Pain. All of these can be heard in every riff, drum beat, and anguished growl of Maurice de Jong on Shapeless Misery, his latest offering to the world. The protean musician uses The Sombre, his Death Doom apparatus, as the vehicle for the album, a six track, thirty six minute affair inspired by the content of his own music player from his younger days (see the interview below for a more thorough exploration of his influences here).

Hauntingly melancholic riffs weave in and out of the maze of rhythms set forth by de Jong’s drum work, bending around corners in often unexpected ways. Shuddering bass pummels a steady undercurrent of power, while the maestro’s vocal incantations on his meditations of death and loss wrap inexorably around each synapse. The journey is fully launched. Horrors and beauty both await.

As someone more familiar with de Jong gnarlier work in projects such as Gnaw Their Tongues, Shapeless Misery was something of a surprise, initially. It has turned into a very welcome one, however, as his tribute to his youthful musical tastes, is well and faithfully executed. While my own tastes may lean to his nastier surprises, this album will have a place in my listening for a long time to come.

Hayduke X: Congratulations on the upcoming release of Shapeless Misery. I’ve been really enjoying it. Now that it’s done and nearing release, how are you feeling about it?

Maurice de Jong: Yes, it came out really well actually. I was going to leave it at one album, but inspiration hit and it was finished in a short period of time.

HX: I have to say that I’m most familiar with your work through Gnaw Their Tongues and Hagetisse, though I’ve also listened to the most recent Golden Ashes and Dodenbezweerder. None of those projects suggest musically what we hear from The Sombre. Where does your inspiration come from for this project? Why the dramatic shift in style?

MdJ: No shift. It’s actually one of my first music lovestories. As a kid, I went from Heavy Metal to Thrash/Death metal to Doom. I was a massive fan of early Doom/Death and later the Peaceville three. My first three bands where all doom/death bands: Atrocious, Cauteror and Soulwound. So it’s more of me turning back to my roots, rather than a shift.

HX: Oh, interesting. So what inspired the more caustic side of your musical endeavors then?

HX: As in, listening to black metal and seeing what humanity is like?

MdJ: I mean: discovering black metal and a growing hatred for humanity.

HX: I figured it was something like that. Lol. Back to The Sombre. It’s my understanding that (like many of your projects), you perform everything on the album. What does that composition and recording process look like?

MdJ: Yes, I did everything on this one as well. It will start with a rhythm idea or a melodic idea and I will build from there. I usually will record skeletons of songs (basic drums, guitar and bass). Work out the structure, and later I will fill the skeletons up with overdubs of leads and synth, etc.

HX: Do you have your own studio where you work?

HX: I’m sure that makes it easier to be so prolific. Do you also do your own mixing, etc?

MdJ: Yes I do my own mixing and mastering.

HX: Tell me about lyrical themes on the album.

MdJ: Although rooted in personal tales, I tried to keep the subject matter distant from my personal life, if that makes sense. Lyrics are about religion, death, love, misery, personal tragedy etc. but I’d say they are mostly about death.

HX: Do you have a favorite track from the release lyrically? If so, which one and can you delve more into it?

MdJ: hmm..difficult. They are all miserable, but I guess ‘An Untameable Desire’ is the one I like best. It speaks of an inner fire, an inner rage..well that’s relatable: against the grain, into desolation. We will fight our fate with an undying vigor.

HX: Definitely relatable. Are there any connections to Into The Beckoning Wilderness, other than being released under the same project name?

MdJ: Well the music is in the same style, not sure what you mean?

HX: Sorry. Let me clarify. I was thinking about conceptual connections. You release so much music under so many different names. I guess I’m curious if the connections go beyond just the same styles. If there’s any lyrical or thematic connections.

MdJ: The connection does not go very much beyond style. The lyrics are in the same vein as the first album. Where the first album lyrically was more fictional/fantastical..if that makes sense. The new album is much more miserable. Dealing with loss and death. A bit more real and rawer. But the overall connection would be a romanticisation of death. A poetic tribute.

HX: I think, given the themes you’re talking about, the album cover is a great fit. The demon on the cliff looks very forlorn. Who did the cover and how do you see it fitting?

HX: I would agree that it fits perfectly! As part of this feature, we’ll be hosting an advance stream of My Betrayal As A Knife. Can you give me some more details on this song? Just whatever you feel is important to share, musically, lyrically, etc.

MdJ: The song is about the complexity of losing someone you both love and hate. The song is beyond hope..only the sad beauty of permanent loss. I think the song is a nice representation of the album as a whole, with the melodic themes. I really think the last part (the last two theme’s) are some of the best I’ve written. ‘I live by the rules of imperfection/I deny the existence of a better you and a better me’.

HX: It’s certainly an excellent song. Probably my favorite on the album, though I’m not sure I’m fully decided yet. Now that this one is done, what are you working on next? Do you think The Sombre will make another appearance down the road sometime?

MdJ: Yes I’m almost certain it will. I’m having a break from my main project Gnaw Their Tongues, so I’m focussing on other things. The Sombre is one of those things. There is a split album planned with another band from my home town.

HX: Oh, excellent! Any further details you can share? Or not yet?

HX: Very cool. I need to check out Grim Fate, I guess, but I’m already a Burial Remains fan. How did you end up connecting with and releasing this through Brucia Records?

MdJ: I posted on my Facebook if labels would be interested in releasing the album. I had already sent some promos to labels. But I had no luck. So I posted it on Facebook and Brucia and another label were interested. I liked what Brucia had to offer, so I went with them.

HX: I’m glad it worked out. As a writer anyway, I’ve had very positive experiences with Brucia. I think my last question is just an opportunity for you to share anything else you want to with my readers. Any last thoughts?

MdJ: If you don’t know ‘Turn Loose The Swans’, go worship that album!

HX: Awesome! Thanks so much for the interview,  and I have a new album to go check out. Lol