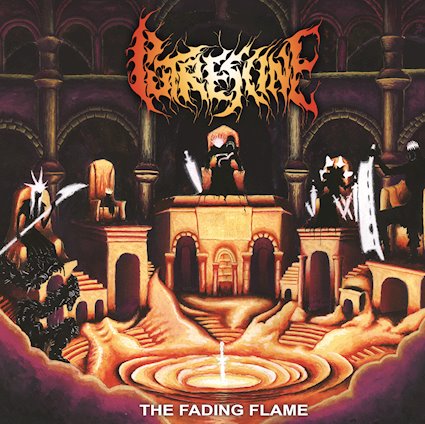 Today, we are proud to present the advance stream of That Mountain (my current track crush from the album). The entire album will be out soon, so use this to immunize yourself from the terror about to descend on the world. Press play, then drop down for my full album review.

Putrescine are back again with another stellar release. The California trio gave us The One Reborn in 2019, a release I wanted to review, but which unfortunately fell off the side of my always-too-full reviewing plate. On The Fading Flame, I decided not to make that mistake again. The debut album features ten tracks of madness across forty-one minutes. The discordant riffs come out of left field over humming bass and diverse drumming that runs the gambit from maniacal to groovy. The dual vocal attack adds to the diversity of sound in positive ways as well.

Imagine coming to consciousness somewhere in a dark, dank, crumbling tunnel. There are hundreds of insects, spiders, centipedes, and more crawling all over you. That’s the impression I get from the swarming riffs. Inevitably, each listen leaves me with an (ear)worm or three that keeps crawling ever deeper into my brain for days after. The atmosphere created by the full product fits well with the Dark Souls/Bloodborne themes present in the lyrics and artwork. I’ve never played myself, but they’re my son’s favorite games, so I’m pretty familiar with them. Dark and oppressive, with ominous intent could be used to describe both the games and this album.

The trio of Marie McAuliffe (vocals/drum programming), Trevor Van Hook (guitar/vocals), and Zac Sanders (lead guitar/bass) are putting together a special project. Gnarly dissonance with oppressive atmosphere, dark video game themes, and leftist lyrics? Sign me up! You should sign up too.

Go to the label Bandcamp below to preorder, then just down to read a comprehensive interview.

Hayduke X: Would you please just start by introducing yourself and your role in the band? Feel free to include your preferred pronouns. Mine are he/him.

Marie: I’ll start, I’m Marie (she/her). I scream and torture my bandmates with my writing. I’ve also started recording some rhythm guitar for some upcoming stuff.

Trevor: I’m Trevor (he/him), I play guitar and do vocals

HX: As part of this feature, we’ll be hosting “That Mountain”. What is the song about thematically?

Marie: An oddly personal reflection on being trapped in an unhealthy situation by the pressures of capitalism. It also is a reflection on my own struggle with self-harm and self-destruction. I was at a weird part in my life when I wrote that song. Musically, it’s some of the most discordant and heavy stuff I’ve written, especially with that goopy lava intro.

HX: Am I understanding correctly that you’re the lyricist for the band?

Marie: Trevor and I split lyric duties. I did the lyrics for Outsider, That Mountain, and In a Setting Sun.

HX: Gotcha. How about writing the music side? What’s the band’s process for that?

Marie: One of us will write something then send it to the other. Feedback and possible edits follow, until the song is finished. I really like Trevor’s feel for riffs and overall structure, and I shine with adding in harmonies and transitions.

HX: That sounds very collaborative. The promo materials I received also listed Zac Sanders, plus two live members, Calin Kim and Shane Bogdan. Have they been involved in writing as well, or is it essentially the two of you?

Marie: For now it is just us

HX: Are the two of you the founders of Putrescine? How did the project start?

Trevor: I started the project with Zac and Marie offered to help with drum programming. Around the time of recording the EP I shared the song that went on to be Profaned Failure with Marie and we decided that would be the direction to take things. The collaboration from there has been incredible.

HX: As I understand it, the project often has pretty political themes. What can you tell me about that?

Marie: Trevor and I are both communists and it comes through on what we write about.

Trevor: I originally approached it because I find the realities of imperialist violence are horrifying enough for the genre.

HX: I thought that was the case. I think I’d define myself more as an anarchist, but I certainly stand in solidarity with the radical left against oppression. What steps, small or large, can/should be done right now to move towards a less oppressive world?

Marie: As far as immediately, help support mutual aid funds and direct charity (giving to people you know who need it). The state of the working class is sad and desperate. Millennials and zoomers may be some of the most radical generations, but they’re also the most domesticated by capital, born and raised to be competent obedient workers. As far as the long term, I don’t think a revolution is in our immediate future, but it is vital to build support systems outside of capital, so that when it falters and crashes, there’s a support system for some of the more vulnerable. I think that the only way beyond capitalism is through it’s self destruction, so right now it’s best to prepare and organize. Oh, and actually read theory. Read theory from different ideological wings, Get an understanding for how capitalism functions as a machine.

Trevor: I think one of the best examples were the survival programs of the Black Panther Party. The last year has made it clear, the state will enable fascist violence while it watches the working class die during a pandemic. This makes it our task to build where the state is failing; to highlight its illegitimacy and to organize around our needs first and foremost, but also the need to end the dictatorship of capital.

HX: The promotional materials I received have a quote from Marie regarding the track Outsider. She states: “Outsider is a bitter cry against the well off queers who historically sold out the gay rights movement and killed its radical element. It’s a message about class unity being more powerful than liberal concepts of identity.” This seems to fit this discussion of organizing the working class. Can you expand on this further, especially the last phrase (starting with ‘class unity’)?

Marie: Well, I look at what happened to STAR and those early radical communist organizers, who were approaching broader goals beyond just inclusion, and how they were left behind despite doing so much early work. Class unity has the ability to actually change things through direct actions, while liberal inclusion just wants to see marginalized identity added into the current machine of capital. Even with acceptance, marginalized identities still face systemic discrimination. Organizing along class lines is more powerful, since your allyship is built on solidarity. Like, I feel I have more in common with my working class cishet coworker, than someone like Natalie Wynn, who may be closer ideologically and identity-wise, but who’s income puts her in a class above mine with different struggles and interests.

HX: If someone was just starting to explore these ideas, what are some of your favorite resources that you would recommend?

Marie: Well exploring leftist ideas? I recommend accessible stuff like YouTube. Democracy@work and Cuck Philosophy are some of my favorites. There’s some great companion lectures for nearly every classic work of theory too. I also recommend learning history and reading the theory that arose from it. Despite being old, Lenin has been some of the most insightful stuff I’ve read.

Trevor: My personal favorite podcasts right now for history and theory have been revolutionary left radio and red menace.

HX: I understand that there are also themes/imagery from Dark Souls and Bloodborne on the album. I’m not really a gamer, but those are my older son’s favorite games. Tell me about that and how you weave it into the other themes we’ve been talking about.

Trevor: Everything about those games is perfect. The atmosphere and aesthetics are instantly compelling. I didn’t go into writing those lyrics with any bigger ideas in mind, but as I was digging through lore, a few things became apparent. All of the characters we wrote about had linked the flame for various reasons, and to disastrous effect. If you look at that as an allegory for maintaining the status quo, then letting the fire fade is a revolutionary rupture toward the age of dark, or the age of man. I have to imagine that in the age of dark, full communism will be achieved.

HX: Interesting analysis. Maybe I need to pay a little more attention to those games. Am I remembering correctly that you’ve been connected with Tridroid since your first release. How did you end up connecting with them?

Trevor: They reached out to us after we released the digital version of the EP and our first attempt to get tapes done fell through. When they heard we had a full length almost ready, Tridroid offered to do the vinyl, and have gone above and beyond to make sure this release is a success. I love working with them, so it made sense to have them release it.

HX: That’s great! They run a fantastic label. I just now saw images of the record on Twitter that Tridroid shared, and it looks incredible. Tell me about the layout, cover art, vinyl color choice, etc. Who was involved in that? How has that all come about?

Marie: If I recall correctly, I think I recommended Asty for the cover art. He’s a brilliant artist and an influence on my own art. He did a great job capturing that scene with a perfect old school vibe to it. The final layout was the folks over at Tridriod who also did a brilliant job.

HX: What does the scene represent?

Trevor: The scene is the firelink shrine from Dark Souls 3. The figures on them are the Lords of Cinder whom the four tracks are about.

HX: Thank you both for taking the time to speak to me and for your thoughtful answers.

Marie: Yes, it was a pleasure.