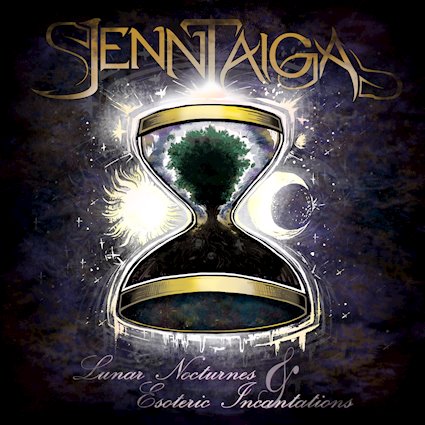 Eerie, beautiful, powerful, meditative…all of these are appropriate descriptors for this spacey third track on Lunar Nocturnes and Esoteric Incantations. King of Swords has an impetus all its own, forcing a sense of movement on the listener, pushing them into an ‘other’ space where they experience the synth driven journey somewhere out there – or perhaps deep in their own psyches. Ultimately a dark trip, King of Swords will not leave you untouched. Press play to experience this for yourself, then drop below the video for my full review, plus an extensive Zoom interview with Jenn Taiga.

I once again find myself reviewing dungeon synth this year…well, sort of. As you will hear in the video interview below, this artist and this album are dungeon synthy, but also owe a lot to other influences like progressive rock and Berlin School. I would suggest that, though I was aware of dungeon synth last year, it is 2021 that has really been my introductory year to the genre. I’ve begun exploring in earnest, thanks to artists such as Hideous Gomphidious (reviewed earlier this year), Vaelastrasz, and of course, the dungeon synth fusion master Jenn Taiga. Her work has truly been one of my greatest finds in this new journey so far.

My introduction to Taiga was Plight, her March of 2020 release, which is wonderful in it’s own right. My next experience was her masterful set at Northeast Dungeon Siege. She definitely has a unique take on the genre, thanks to her own journey, which you can learn more about in the interview below. While Lunar Nocturnes and Esoteric Incantations is certainly connected to these past experiences, it is an evolution rather than a continuation.

Among many features which make this release unique is one we discuss early on in the interview below. As a listener, and according to Taiga, also as the artist, Lunar Nocturnes and Esoteric Incantations is essentially a split with herself. There are really two distinct sides, with Lunar Nocturnes presenting a mellower, dreamier approach, followed by the spite and aggression of Esoteric Incantations. (the song premiered above is a Lunar Nocturnes track) The result is a diverse album full of surprises, entirely engaging, and full of many layers of emotion and passion. I highly recommend it!