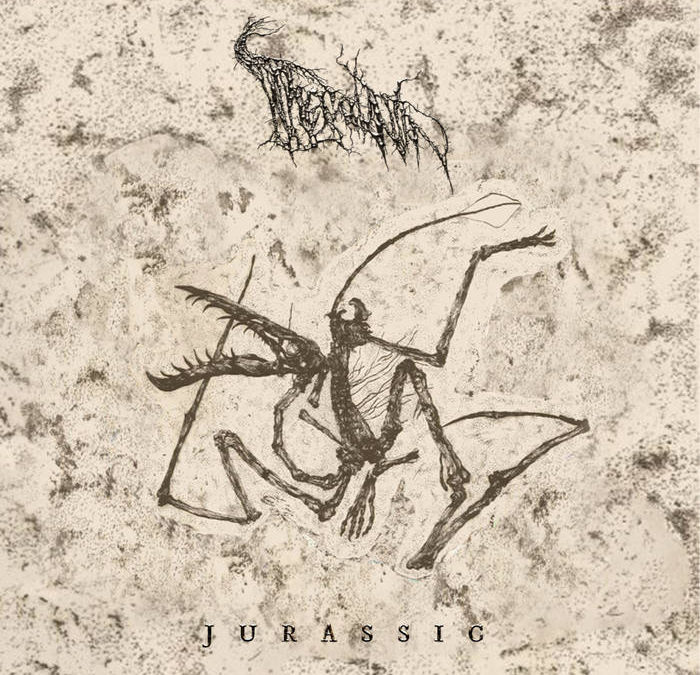 I was born in Edmonton, Alberta, Canada and raised throughout the Canadian prairies. One of my early memories is of going to Drumheller, Alberta in the middle of the Badlands to check out the dinosaurs. You see, Drumheller is in the heart of what is often referred to as Dinosaur Valley, one of the most fossil rich regions of the world. For this reason, and probably because most young children feel this way anyway, I have long loved dinosaurs. Their enigmatic truths are intriguing, yet may always be just beyond our grasp. Their size, their apparent savagery, the gentle grace of the largest (at least in my mind’s eye), and perhaps most of all, the mystery of their disappearance. All of this makes them a fascinating subject.

It would seem that G.E.F. (vocals) and G.D. (bass) feel the same way about dinosaurs, as Jurassic is a 7” EP specifically about the topic. Through four tracks, they cover four dinosaurs, with side A featuring two of the flying pterosaur types and side B focusing on two sauropods (think long necks from the Land Before Time movies). In many ways, the duo (with L.S. – bass and V.P. – drums as additional live members) capture musically what they are singing about thematically. The short EP is a strange, yet intriguing combination of heavy and fluidly graceful.

How is this achieved, would seem to be the next natural question. Let’s start with the make-up of the band. The background image on the band’s Facebook page proudly proclaims “No Guitars”, for indeed, nothing of six string variety is anywhere to be heard. Instead, two basses thrust forth over the massive rumbling drums, and beneath the harsh, gravelly vocals. The thickness of the bass tone combines with some truly dynamic playing to give this release the tension it needs. Though the drumming is rock solid and the vocals are excellent in a primitive way, it is really the two bass guitars that are the highlight. The effect is to draw you back to the time of the dinosaurs with abruptness, brutality, and yet with mystery and grace interwoven into the atmosphere in subtle and surprising ways.

Thecodontion have created a creature that is uncommon for our day and age. Death metal with only bass and drums is so rare as to be almost unheard of – I can only think of one other project that has a similar make-up – but they have used the unorthodox approach to write and play the highest level of death metal. Click play and get stomped back into the Jurassic!