The Internet Killed Metal and Other Sob Stories

“The Internet has killed metal, it’s just not the same anymore,” and other such whining has spewed out the mouths of some my fellow metal heads lately. It made me think about all the reasons I believe they were wrong. Lucky for me I have this column, and a ton of internet friends, to help with my public rebuttal. Let’s start with a comparison. 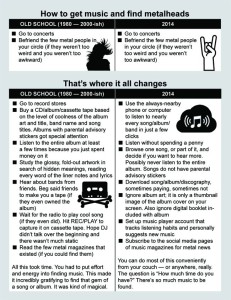 If you’re one of the whining, complaining, “The internet killed metal (insert sour face)” people, you’re probably also a person who doesn’t deal well with change. Metal has become stronger because of the internet. The way you get your metal and meet metalheads has changed.

Could metal music, shows and community be stronger? Sure. But it’s not the internet’s fault. It has only changed the landscape. Entirely. And we need to make the most of it, for the good and the bad.

Music as a commodity product

It’s easy, it’s free/cheap and it’s sharable. You don’t need to spend much money or time to get music online. Like any readily accessible, free/cheap, commodity product (pencils, for instance), we have less value for it according to society’s value system based on the almighty dollar and ever-ticking clock of time.

Music is so accessible these days, that we’re not spending our hard-earned dollars on it. There’s no need to, really. From your phone to computer, video games to streaming services, music is everywhere. And it’s not just metal, it’s all kinds of music.

But the flip side of that is that everyone can have way more metal in their lives than ever before. Our souls need music. That’s where we say, “Thank You Internet!”

We put all the metal on one calendar and keep you informed on all things metal. Visit moshpitnation.com