The Bar Stool Preachers – Soundtrack to Your Apocalypse 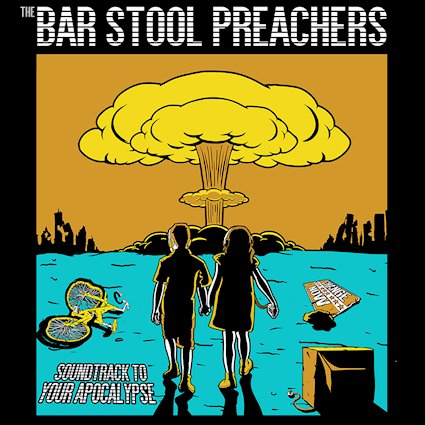 Album – Soundtrack to Your Apocalypse

Punk has always separated itself by the philosophy built into its core, specifically political philosophy. This explains how The Bar Stool Preachers only had to only adjust some lyrics for their digital EP, Soundtrack to Your Apocalypse. This EP has two new songs, “When This World Ends”  & “State of Emergency”, where they reflect the ‘new’ normal that they and we are living.

If you were to judge a song by its title, then you would think “When This World Ends” is full of negative verses and heavy breakdowns. The Bar Stool Preachers actually did the flip by trying to bring out what shred of positivity they could during the COVID-19 pandemic with the uplifting thought “We might have a chance to fix it all. If we do things right just this time we don’t have to go back to normal.” Not only did they write a song that is lyrically uplifting (as best as they can), they replaced that heavy breakdown with a relaxing reggae respite. This is a song that is full of fantastic one-liners that perfectly depict what is going on in the UK, USA, and the rest of the world.

“State of Emergency” is the song that you want to have blaring from your speakers during the protests that occur after the pandemic has rested. The lyrics aren’t the only thing going to be supporting your movement in the streets, but the song is structured to keep you and your fellow marchers moving forward. And it’s pretty simple to sing along with, which is the best kind of protest song.

The Bar Stool Preachers released the EP completely free as they understand that music is something we all need during these strange times. They have set up a donation point on their website to not only help support the band but to also help donate to the NHS Charity. With the release of their digital EP, they have also launched Soundtrack to Your Apocalypse merch where a portion of the proceeds is given to the NHS Charity.

Biography:  CeeCee just started writing reviews for MoshPitNation. She is new to the music reviewing scene but has been a music lover and connoisseur her entire life. Writing is something that she has been doing on and off the past few years in a personal and professional setting. In everyday life, she works in education & social media marketing while trying to figure out if God looks like Alanis Morrisette or if Alanis Morrisette looks like God.