Tethra – Empire of the Void 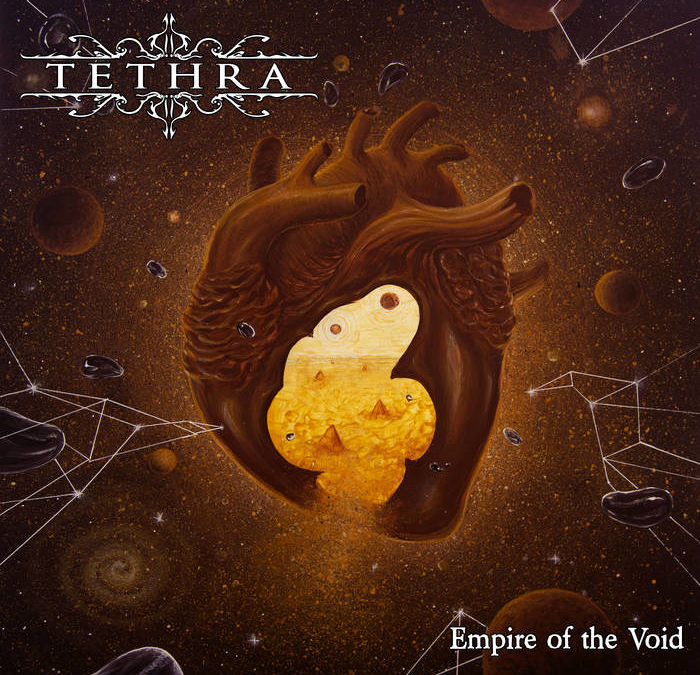 Album – Empire of the Void

In March 2020, when the world was worried about a pandemic, Tethra released their latest melancholic doom masterpiece, Empire of the Void. Empire is their third full length album and a follow up to the 2017 release, Like Crows for the Earth.

There are a few changes to their line up for Empire. Daniele Ferru (Abyssian, Drakkar, and Myriad Lights) replaces Lorenzo Giudici on drums and Guardian Angel (Madhour, Sceletus) takes over for Gabriele Monti on guitars. But Clode Tethra still leads his namesake, keeping the sound and vision the same since 2008. Tethra has a well polished production and continues to be a common name in Italy’s doom metal scene.

On the first listen, instrumental track, Cosmogenesis, leads you into the vastness of their doom universe. Cold Blue Nebula begins the journey into the hidden depths of this unique world. First chords blast your ears with the gritty doom filth one desires. Vocals growling, floating within the doomiverse. Then the pace change hits and drives you deeper into the void. Utterly amazing.

Next comes a three part saga, Gravity. These three tracks launch you into space, leaving you floating, adrift among the stars until you reach the last stronghold. It is here where you find the Empire of the Void. What a story Tethra has for the listener!

The early edition album I received to review features a track not listed on Bandcamp’s digital release, Tethra’s cover of Space Oddity! If you can get a listen to this rendition, you will be blown away. They have taken Bowie’s work and brought it to their doom void. All the grittiness and sorrow of doom with the familiar tune. Just amazing.

Finishing out the album are three more astounding tracks: A Light Year Breath, Dying Signal, and Ison. My favorite track of the albums is Dying Signal. It’s a little heavier with many pace changes, and over six minutes of despair, left to float in the void with no further way to communicate to home.

If you get lost in this album, don’t worry the final track, Ison, brings you back home. It sort of summarizes what just happened and gets you to the end. Clean singing with snarling transitions help guide the listener back to reality. I had to catch my breath after such a journey.

Tethra’s Empire of the Void is an incredible example of melancholic doom death metal should be. Be sure to take this trip and explore the vastness. The album is available for purchase and download now.

Recommendation:  Explore the Empire of the Void by Tethra