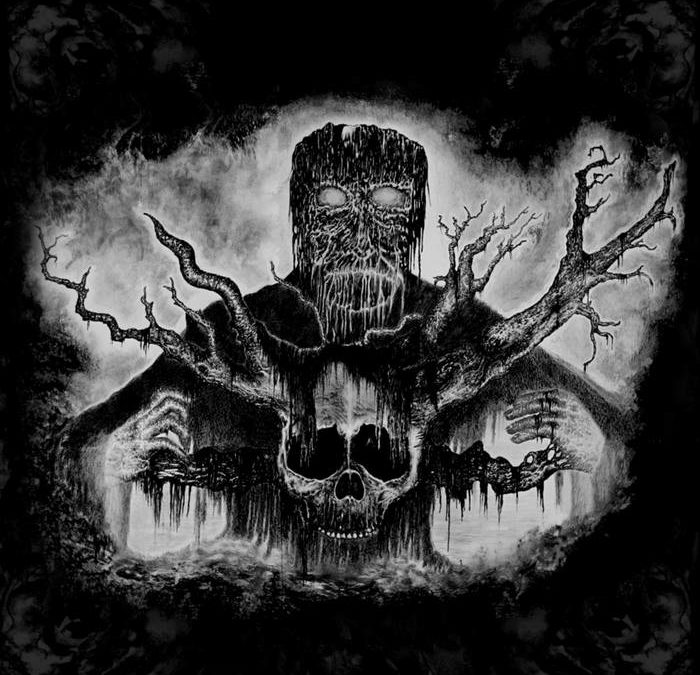 Listening to Dead Rituals by Swamp Witch is like an acid bath. No, I don’t mean like listening to Acid Bath, the band. I mean, like actually taking a bath in acid. Not a gentle acid either. I mean like a large quantity of acid with a pH of one, which you are submerged in for a long period of time…while the members of Swamp Witch hold you under. It’s nasty, caustic stuff, and really I mean that in the best way possible.

The band formed in 2009 and is currently made up of Jacob (bass), Jimmy (vocals), Phil (currently guitar), Zack Gilliam (guitar), and Zak (drums). Dead Rituals is their second and most recent full length, though I have it on good authority that there is some new nastiness in the works. Prior to this release, they put out another full length, an EP, and a live album. If you dig what you hear here, then jump on back to the rest of that discography and give it a listen.

One of the difficult things about this style, I think inherent to the genre, is to keep it from getting boring. You see, part of the DNA of sludge metal is to use repetition as a weapon of brutality. That’s all well and good, except too many riffs end up outstaying their welcome, sliding from abrasive and difficult into the realm of background noise. On Dead Rituals, Swamp Witch avoids that fate through nuance and (often quite minor) variation. Listen to the song Serpent Drug Cult as an example. If you don’t have time for the full (almost) ten minutes, start at about four and a half minutes and listen for about the next three to the changes and evolutions of the track. There’s no sea change, but the turbulence called forth is anything but monotonous. I especially love the slip into the haunting tremolo work shortly past the five minute mark.

Dead Rituals shows Swamp Witch to be a rising star in a crowded sludge field. They are beginning to distinguish themselves from the pack in subtle and feral ways. For my part, I can’t wait to hear what comes next.