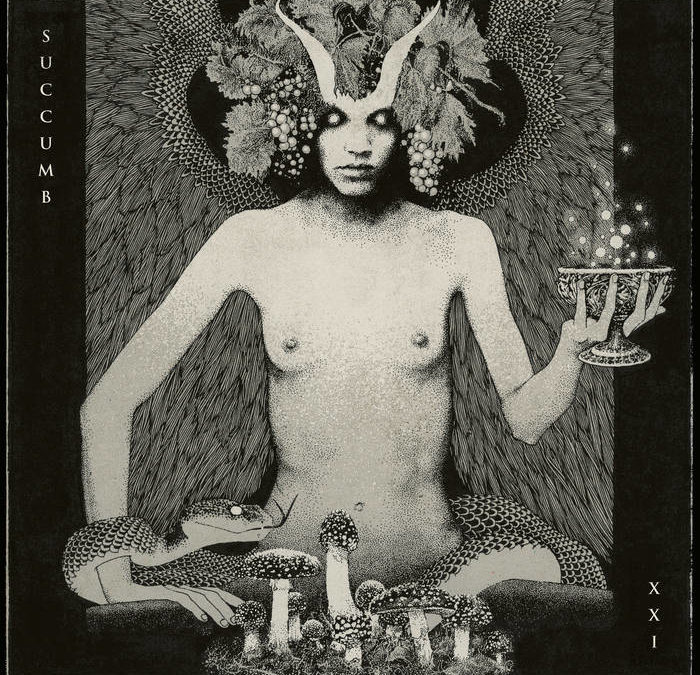 I first must say that this has been one of the best years for death releases since 1991 between Diskord, Replicant, Siderean, ATVM, and many others. It seems like every week there’s a new 10/10 album released. But with so much quality, there’s also just as much competition and, boy, does this Succumb album manage to stand out. It’s been four years since their debut album was released and their sound has only grown.

This album starts at 11 and very rarely dips below that. Everything here is to the point and meaningfully composed; a direct upgrade from the debut. Riffs appear and reappear with little tells giving all the songs a narrative-like flow with some repeated forms. Compositionally, this album is very refined and expertly crafted. It stays mostly in this unique dissonance that isn’t too far off of something you’d hear out of earlier Ulcerate or Voivod. There are very few “traditional” death metal riffs or riff structures. The song “Soma” takes you on quite the musical adventure for its first half as the riffs continue to descend to something deeper and deeper before a recapitulation until it again keeps evolving until it promptly ends. The abundance of pick scrapes, pinch harmonics, and whammy dive bombs throughout the album bring me immense joy. Death metal needs more of those.

The best part about the whole album is its length – just under 35 minutes. It feels like a swift kick in the teeth. Far too many albums are bloated with filler due to the nearly limitless run times you can have in digital media. But, Succumb buck that trend with an album that neatly fits on to a single LP with room to boot. Rather than dragging on the sonic punishment until it dulls and fades, they keep you begging for more by keeping it tight and to the point. The first song “Lilim” does a great job of illustrating that and summarizing the whole album, a whirlwind of riffs, blasts, and growls that leave you wanting more.

The production got an upgrade from the debut. Gone is the weird division between super wet reverb vocals and dry guitars, bass, and drums. Now the vocals are much closer to the rest of the band with a small amount of soft clipping. This album has an overall cleaner sound than some of its contemporaries; the murk lies in the riffs not the production.

The Flenser has a reputation for putting out good unique music and their only death metal band, Succumb, surpasses that mark. I only hope to see more tours and more albums out of this band. They are one of the unsung stars of modern American death metal.

Biography: Mary Well Dweller is but a simple musician with over a decade of experience of consuming and recording extreme metal. Hail dreams, Hail MIDI