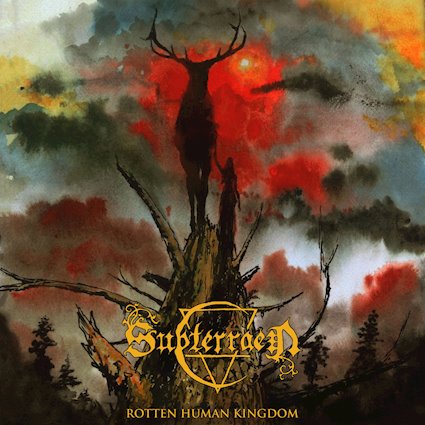 Pink Floyd is often mentioned as a band to listen to when under the influence of certain chemical substances. Let me submit the name Subterraen as a band to NOT listen to under the influence of certain chemical substances. In fact, no substances are necessary to experience the nightmarish hallucinations provided by the forty eight minutes of Rotten Human Kingdom. The palpable horror is experienced through the music itself – no extra help needed. The band shines a black light on the horrors humanity visits upon the planet and the vengeance being prepared by mother earth.

Though the band have been active since 2017, this marks the first release. Milvus handles the drum kit with both power and precision. As is par for the course with this style, speed is unnecessary, but creative hit selection adds vitality to the lengthy tracks. The sound of the album is so thick that I was a little surprised to see no bass player involved. Instead, Chris KKP handles guitar and sound design (I’m not sure how to interpret that…mixing? FX? Something else?) and Clem Helvete handles guitar and vocals. I’m certain that there is a fair bit of downtuning involved to create the lows, density, and thickness of the sound. Riffs are generally slow and ponderous, like a mastodon herd marching towards your ear drums, but engagingly creative nonetheless. I’m fairly certain Helvete gargled glass shards prior to recording his vocals, as they are raw and impassioned.

The overall sound is massive, a slow but brutal beat down of the senses. Spread in various parts throughout the album though, there are sections of great beauty, gems to remind us of the beauty of the planet we are hastening to destroy. Above all else, Rotten Human Kingdom is a pissed off beast of an album, a creature formed from the earth itself, sent forth by its mother for the vengeance so richly deserved.