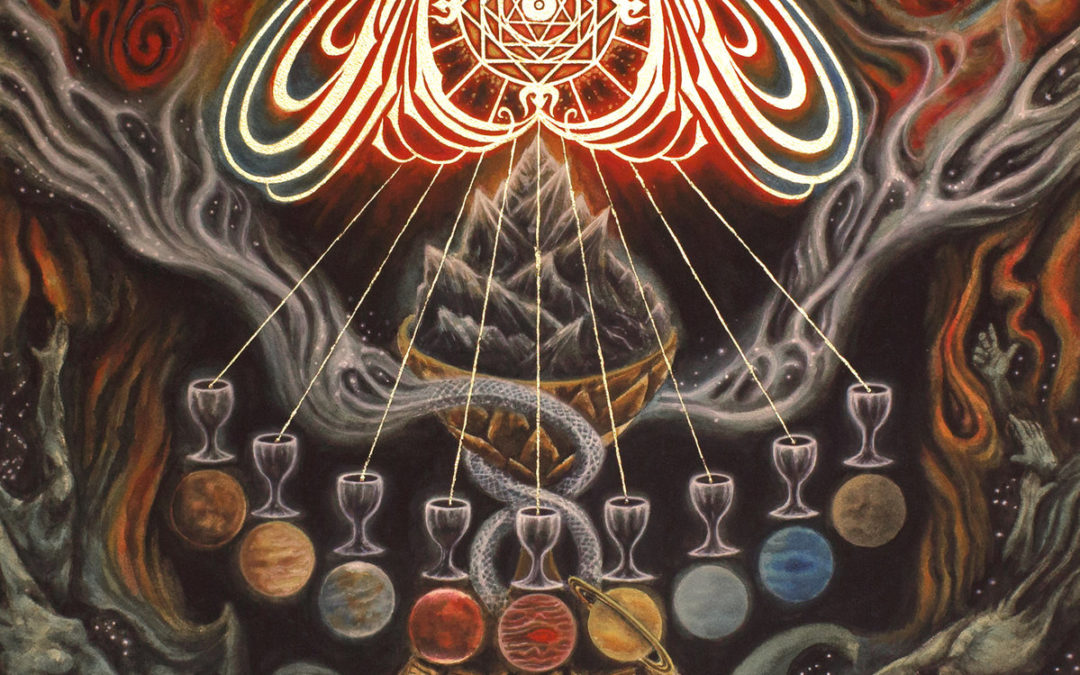 Album – Wanderers: Astrology of the Nine

By Ivan Gossage and Michael Litteral

Greetings, space travelers. A question: have you ever heard Gustav Holst‘s The Planets? No? For shame. Written between 1914 – 1916, it’s a seven-movement orchestral / symphonic blockbuster suite based upon the composer’s depictions of the planets in our solar system. However, instead of drawing inspiration from the expected terrestrial aspects of them, each piece possesses a different orchestration based upon the personalities of said planets. It’s a captivating approach, resulting in a truly wondrous and timeless journey that you should definitely seek out and experience post-haste if you haven’t already had the pleasure. Why am I talking about this? Because it is that same bewitching approach that is also taken on Wanderers: Astrology Of The Nine, the upcoming split / collaborative album from Greek atmosphericist Spectral Lore (aka: Ayloss) and USBM starman Mare Cognitum (the one and only Jacob Buczarski).

You may know both of these projects; hell, you may already be a fan of their previous split, 2013’s excellent Sol. But this goes much, much further than they’ve ever gone together before. Based heavily upon that aforementioned Holst classic they leave the sun behind and stream outwards into the abyss; undertaking an exhilarating astral journey through each of the nine planets and rocketing the listener through an incomprehensibly dazzling array of interstellar warfares, emotional turmoils and mystical mischiefs at 186,282 miles per second, slowing only to better take in the sheer breathtaking vastness of what you’re bearing witness to. At a whopping 115 minutes long it’s such a monolithic, conceptually dense recording and overall enormous event that it couldn’t possibly be covered by one person – so to that end, we have the very first collaborative review between writers of Black Metal Daily and Moshpitnation.com as Ivan Gossage and Michael Litteral each take on Spectral Lore and Mare Cognitum‘s contributions respectively, grappling with the intricacies of the beast.

This astonishing pairing of cosmic black metal giants have created a record as expansive as our solar system itself. Indeed, akin to the relative size of the Milky Way as it sits in the greater universe our fumbling words about it are a mere speck of dust, drifting inconsequentially in an endless, infinite void. So, intrepid interstellar traveler – I beseech thee. Read on and let us be your guide in what capacities we are able; but when the sheer immensity of Wanderers: Astrology Of The Nine hits on 13th March through I, Voidhanger Records (LP and CD) and Buczarski‘s own Entropic Recordings (LP) be sure to immerse thyself in it fully. For this is a split for the ages… humbling in its size and ambition, executed to near perfection.

‘Mercury (The Virtuous)’ [SPECTRAL LORE] begins with a purely ambient chaotic roar of hydrogen fission; nuclear fire raging from the pure burning elements of the inner heliocore. Searing, phase-shifting guitar drone radiates out like a solar flare towards the first planetary sphere, gradually burning out after arriving at some level of tangible solidification with the onset of a steady, rapid, unremitting beat. Tidally locked to the sun, a burning exosphere of white instrumental distortion on the guitar and scathing voice surrounds an iron-dense rhythmic center. The beautiful, propulsive melody combined with carefully layered phosphorescent noise proves “Mercury” to be simultaneously glacially frozen and scorching hot; to gorgeous, entropic effect.

‘Mars (The Warrior)’ [MARE COGNITUM] brings you into its atmosphere with a hovering effect. You see the blood red canyons in the distance coming closer and closer. You feel a creepy aura like something was (or maybe still is) here with you; experiencing this desolate wasteland which has a deep crimson color as far as the eye can see. When you finally touch ground and can see the hellhole for yourself, that’s when the panic sets in. You are far away from home and you might not ever make it back. Blistering drumming and dissonant chords can be heard from every inch of this planet. The Warrior is a great way to describe Mars as well. Marching forward and never losing traction, he will complete the tasks in front of him at all costs. When the color of blood is the only thing you can see it’s hard to keep composure; but as a warrior is taught to be strong and courageous, he will make sure to get the job done – as this song does beautifully.

One can almost feel the soft breeze of terrestrial atmosphere with the initial clean harmonies of ‘Earth (The Mother)’ [SPECTRAL LORE], making peaceful eddies across the warm prehistoric landscape before a doomy, distorted progression and vocal roar introduces rolling sea on dense stone. Explorative guitar lead narrates the evolution of life, struggling yet thriving against the elements. And then, near the halfway point, an explosive acceleration of kick drum, blast beats, organic black riffing and screams. The beauty and rage of mankind, upon this worldly backdrop which rises up like civilization and pinnacles with a blinding, posthuman musical intensity before easing off into serenity… or annihilation?

Coming up on ‘Venus (The Priestess)’ [MARE COGNITUM], its aura is enthralling and definitely grabs your attention right away as anyone who is given such a high title as “The Priestess” should. Venus shows its harsh beauty right away as it takes you on a smooth but yet stern journey around its surface. The glow of the planet rejuvenates you, in awe of gorgeous landscapes. Flowing freely like the hair of The Priestess, each section weaves in seamlessly; done with such grace but at the same time a strong-willed force. As you finally start to leave to continue on your journey through the solar system, you can’t help but stare at Venus as you drift further away, trying to take in everything you possibly can, and trying to make sure that you embrace it before it becomes a memory.

In the distance you see a colossal object, and the size of it alone is puzzling to grasp. ‘Jupiter (The Giant)’ [MARE COGNITUM] comes in with a special long journey that demands your full attention. Just as Jupiter is the biggest planet in our solar system the track is also the longest in length, clocking in at fifteen minutes and four seconds. One thing that I find really special about this song is the ability of it to be free flowing like a gas, which Jupiter is actually made of. The long drawn out effect of the music also beautifully depicts how enormous this beast really is. Tremolo picking and methodical drumming will bring you through the fog and right into the heart of Jupiter. Don’t let the length of the song scare you, it’s some of the best showcasing of musicianship on the album in my opinion. When writing a song of this size it’s easy to lose inspiration and to just go through the motions so to speak, but you can really feel that it does The Giant justice and that all the weapons had to be pulled out for this special occasion. The hypnotic and mesmerizing atmosphere will keep you in a trance the whole way through, and efore you know it, you’ve already breezed through the biggest obstacle on this journey – wiith pleasure, it is checked off the bucket list.

Like orbiting rings, ‘Saturn (The Rebel)’ [SPECTRAL LORE] begins in a place which is distant, detached, a somewhat sporadic and ominous shimmering metallic guitar plucking, gradually circling inward with the addition of ponderous beat and minimal bass until the distortion of the outer atmosphere is breached. Yet, even here there is no solid ground, for this is a gas giant, vaporous and intangible. Soaring guitar and jazzy bass dissipates across the abrasive winds of sustained, harrowed vocals, all of which slowly revolves around the dense core of a plodding, leaden rhythm.

‘Neptune (The Mystic)’ comes swiftly in with a beautiful display of all different elements and sounds that we know to come from [MARE COGNITUM]. Neptune is extremely far away from the sun and with that being said it makes it extremely cold, blue, and somewhat depressing. But there is beauty with sadness and negativity and a unique depiction of that can be felt and heard on this track. Chilling melodies and disheartening dissonance can be heard weaving in and out as the mysteries of Neptune unfold right before you. One thing I really enjoy about this track is its strong back bone and force that can be felt while taking it all in. The further you get into your journey, the more gravity is forced upon you and will eventually crush you before you finish. Beautifully done, and rightfully so for one of the most beautiful planets in our solar system.

Perhaps taking a cue from the perpetual hardened diamond-hail assailment of which this ice planet is composed, ‘Uranus (The Fallen)’ [SPECTRAL LORE] consists mostly with the barrage of a frigid, penetrating black metal noise-storm. Churning, relentless guitar riffs cascade over a periodically elevated bass progression as downright cavernous vocals bellow from the glacial mantle. Nuanced deviations from this onslaught include what seems to be some sort of wind instrument (flute perhaps?) which dances almost joyfully amidst the blast. All of this fades away a little over halfway through the song, and we lapse into a suspended, contemplative, almost hallucinatory acoustic interlude before the tempest fades back in momentarily and then disperses for good.

Even though ‘Pluto (The Gatekeeper) Part I – Exodus Through the Frozen Wastes’ [SPECTRAL LORE & MARE COGNITUM] is named after the ninth planet, metaphorically it seems more apropos to describe it not as a cosmic body, but as the vast dark space between them. Echoes of ebbing radiation stretch in waves like the ethereal tides of a blackened galactic sea. The various gravitational tugs of the celestial objects reach across the emptiness with barely discernible auditory glimmers and sustained, luminous ambient textures. Low rumbles of dark energy ripple through the star-scape and empyreal choir-like effects voice the loneliness of each orbit until at last we reach Pluto…

To close out the journey, it only makes sense that ‘Pluto (The Gatekeeper) Part II – The Astral Bridge’ [SPECTRAL LORE & MARE COGNITUM] would be our final destination. I like the last two tracks a lot because they are both actual collaborations instead of just one sole entity. The flow of the song is smooth, really showing that these two projects are no stranger to each other and can come together and create something special. I find that closing an album out on a high note is extremely important and they definitely nailed it on the head with this one. Both projects showcase plenty and you can’t really say which one is more dominant; a perfect balance, if you will. During your last stop on this cosmic journey you reminisce about the different emotions that you’ve felt. Heavy, crushing black metal will be the main motive behind this one as it reminds you that this is a different experience than most were anticipating, especially if you were to compare it to the previous MARE / LORE split.

With both bands continuously growing and exploring different variants within the scene, you can add Wanderers: Astrology Of The Nine to their list of greatly crafted albums. What a ride this album has been, and what memories remain of the wonderful imagery that has been painted for you during this trip. Expect this record to stand the test of time… and be something that will live on as one of the greatest splits in recent history.