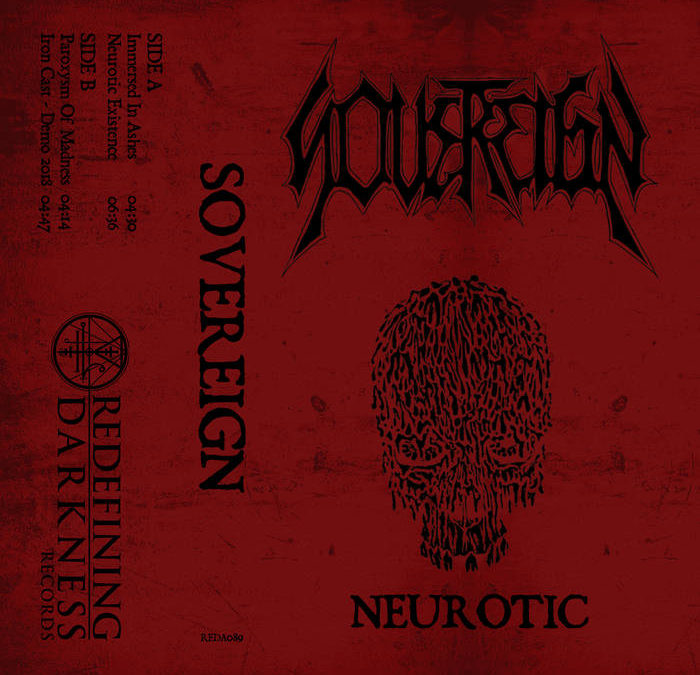 “Taking the future of death metal back to 1987”

This one’s a pretty deep cut. I got a tip about this tape from some internet weirdos and it’s killer! Sovereign hail from Oslo, Norway and feature members of Nocturnal Breed (yes, the band with the strippers). For Viddar Fineidet and Tommy Jacobsen, Sovereign is an opportunity to get away from the gimmicks that they felt were boxing them into their past projects together. That’s what they say about it anyway; the truth is they’ve traded one gimmick for another, but this time it’s “1980’s-style thrashy lo-fi death metal” and it’s rad.

The tape kicks off with “Immersed in Ashes” which was released earlier this year as a single. From the get, the band let you know what they’re about: muted pedal tones, chromatic key changes, and a lovingly faithful recreation of the sounds of early Death and Pestilence. It seems like a winning formula, but I feel like proper tributes to Scream Bloody Gore and Malleus Maleficarum have been largely absent from the underground in the past decade. Followup track “Neurotic Existence” has even more Death worship, complete with a prodigious six-plus-minute-run-time that would make Chuck Schuldiner proud. The band get back to basics for “Paroxysm of Madness” which ticks all the classic thrash and death boxes for any fan of the late 1980’s. EP closer “Iron Cast” is a re-recording of the band’s first single with the focus and tightness of the intervening years since their first demo added into its whirling fury of speed metal riffage. This track is perhaps the most “Slayer” of them all, which is fitting considering the bands they take greatest influence from all started as Slayer clones in one form or another.

The Neurotic EP remembers that this style of lo-fi thrashy death metal is dense and hard to take in large quantities; one of the tape’s strengths is its brevity. Four to six songs feels like the perfect amount for this kind of music, and that’s exactly what we’re given here. The result is a record that you WANT to revisit again and again; it’s most accessible feature is the lack of commitment required to take it all in, and that counts for a lot in an internet age oversaturated with content. Say your piece, kick some ass, and be done with it! Sovereign delivered on all fronts with Neurotic, out April 10th from Redefining Darkness Records. Cassettes are limited to 100 copies worldwide and, as mentioned above, some are still available as I write this. Grab one and be one of the lucky hundred who were into this rising star before they got big.