Slumlord Radio – Gonna Be A Riot/I Wanna Be Your Dog 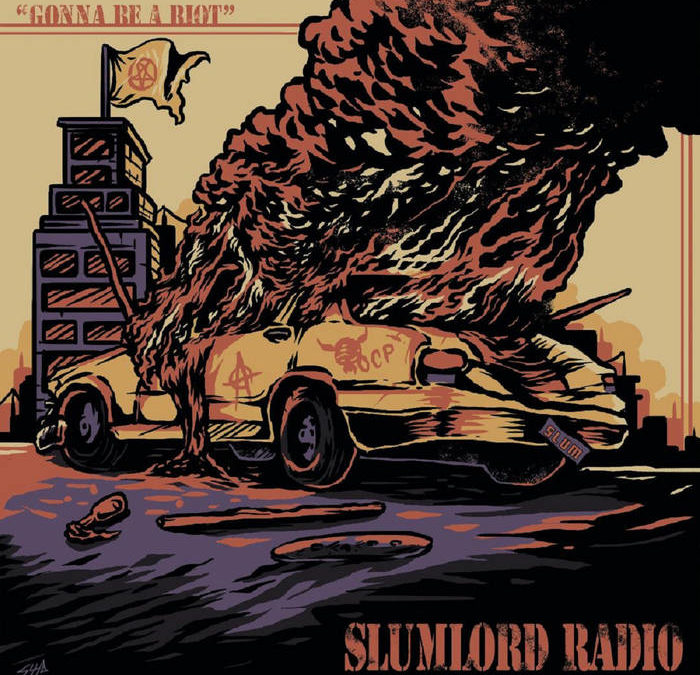 Album – Gonna Be A Riot/I Wanna Be Your Dog

Right now, no one needs to be reminded, obviously, why it’s a terrible time to be a musician. It flat-out sucks, quite frankly, for both the struggling musicians and us live music fanatics. Thankfully, many artists have been bringing us together and entertaining us via live streaming of concerts. But some bands, such as Grand Rapids’ own Slumlord Radio, also have released new studio goodies for our in-home listening pleasure.

No strangers to either the regional live circuit or the studio, Slumlord Radio deliver plenty of headbang for the buck on their new single, “Gonna Be A Riot”/cut with a crushing cover of Iggy and The Stooges’ “I Wanna Be Your Dog” as the B side. The heavy rock/metal/crusty-punkified power trio will not disappoint hardcore fans with this little teaser of a release. Indeed, Slumlord Radio — Tommy “Captain Hollywood” Erickson (vocals/guitar), Michael “The Westside Wolfman” Todd (bass/vocals), and “Rattlesnake” Matt Claucherty (drums) — have never sounded tighter in the studio.

This time around, the Slumlord boys are joined by a plethora of esteemed local musicians, including guitarist Christian Cooney of Moto; Cooney lends a stirring solo to “Riot.” Jeff Piper (Dirty Americans/The Workhorse Movement), in turn, provides the solo on “Dog.” Other featured guests include Joseph Henry (The Holy Warheads/American Zombie Inquisition), Myron (The Dirty Americans/The Warhorse Movement) on vocals, as well as Alicia Adams (White Elephant Records) on piano and vocals on “Dog.”

As for the tunes themselves, unsurprisingly they are straightforward, no frills, downright filthy rock and roll. “Riot” is a catchy and Kaptain (Hollywood) Krunchy mid-tempo number, replete with Erickson’s raspy-yet-tuneful shouts and almost enough cowbell. “Dog” remains faithful to the original while being infused with plenty of 21st Century sonic power.

Or something to that effect. This release leaves us craving much more, which is both a minor gripe and an expression of expectation for Slumlord’s next album. Fans of Black Sabbath, Motörhead, Ramones, and Thin Lizzy take notice.

“Riot” is also available as half of a seven-inch split with Red Stone Souls on Maple Kill Records.

Highlight – “Gonna Be A Riot”