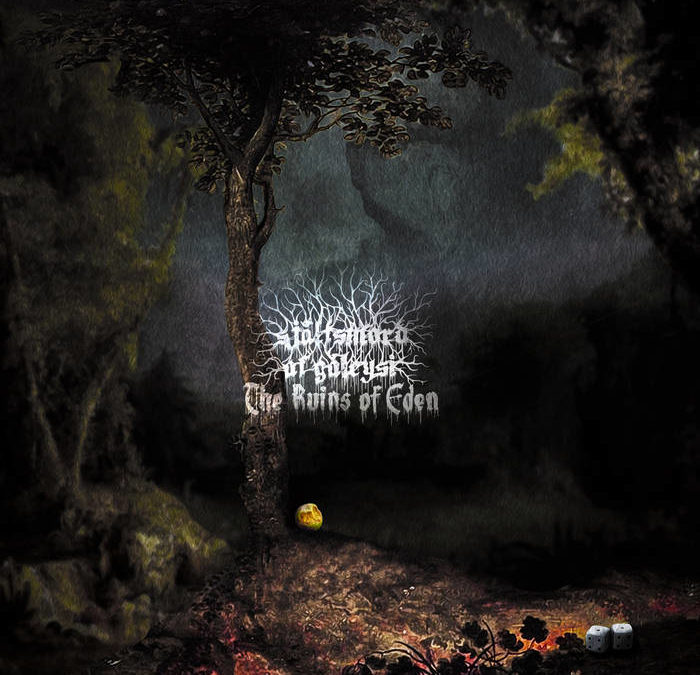 Album – The Ruins of Eden

Let’s talk about Sjálfsmorð af Gáleysi’s new album The Ruins of Eden, while first putting it a bit into context.

The Icelandic name can be translated to “Suicide by Negligence”, but let’s all agree that it sounds way cooler in its original idiom, right?

Ok, so now that we’ve established a common ground for understanding each other, let me try and write about all the other things we could be in agreement.  Once you let yourself be immersed within the labyrinth realms of this one man band you’ll be reminded that it is coming from one of the top provider countries when it comes to modern but relentless Black Metal. And so without notice I’ve just given another point of agreement…

Sjálfsmorð af Gáleysi is the brainchild of Gunnar Þrumi. I met Gunnar a couple years back in a Facebook group I created for solo BM artists to share and collab. He showed me some of his stuff, scattered here and there, and I was so blown away by his unconventional take on Black Metal that it was actually me who convinced him to sort things out and release them as an album in Bandcamp. Perhaps you’ll say my words are be biased, but I first met the music and only then, I really discovered the guy behind it. So if I’m biased, it’s because of the true brilliance I hear in his music. I’m not doing any favors here, by any means. I do, though, fully support him.

Let’s get back on track here and say that Gunnar, under his Sjálfsmorð af Gáleysi moniker, released his debut album on Bandcamp in November 2018, having entitled his collection of tracks Voices of Desolate Planes. The music there, though a bit unbalanced in terms of track-by-track consistency, was nevertheless already showing the major differentiating points that have been explored and exponentiated in the new release The Ruins of Eden.

For starters, Sjálfsmorð af Gáleysi’s approach to Black Metal is one of the most uncanny, difficult, labyrinthine, dissonant and visceral (all at once) that I’ve heard recently. And for this new album, a conceptual nineteen track monster, Gunnar has successfully achieved a sense of unity and a concise aesthetic that kept that uniqueness I had loved, but took it into higher grounds.

The Ruins of Eden is an album that should be heard as a whole, with no distractions and no hard stops, so one can really taste, with delightful disgust, the tormented artistry that is going on.

The seamlessly disjointed instrumental interludes allow you to breathe scarcely, barely providing you with enough oxygen to endure the dissonant apparent chaos where a sharp listen unveils intricate and well thought out riffs. On top of that, the vocals are absolutely, and I do mean f*cking absolutely, awesome. Probably among the best BM vocals these days, as they do perfectly fit the music, adding it an extra layer of dementia, torment and even depravity, with it’s pure visceral, ingrained take.

One listens to “Sanity Override” or “Snake Eyes” and just cannot escape the ensnaring brutality of the darkness to which these tracks transport you. A portal to a maddening agony, an implacable discomfort. And all of this is just dreadfully delightful, right?

So let me go back to the guitar work for a while, as it is the base (ah, along with the non intrusive but completely extraneous drums) for the musical entanglement through which one must walk in incredulity. The guitar approach is what really makes this project so distinctive. Apart from the aforementioned dissonance and intricacy, there is a singular playing style here, one that disjoints itself from what are the BM standards. It may even at some points seem like just replacing music with noise, but even then there is art in the making. One is challenged to discern the weirdness of that convoluted pattern, like if Gunnar is testing us to comprehend so that we can join the kvlt.

Being a more avantgarde oriented listener, and being Sjálfsmorð af Gáleysi, somehow and at first glance, is more consonant to the likes of those who enjoy the rawest approaches of BM, this project is, strangely and in a quite fascinating way, destined to be mostly appreciated by both (normally so apart and many times detached) types of listeners.

Summing it all: this is one of the first good 2020 Black Metal albums for those who like to be musically taken to the most eviscerating, excruciating and darkest corners of one’s mind, courtesy of someone else’s music. This is one of those albums that test you, confront you, wonder you, and makes you travel deep…touching the verge of insanity, your own.

PS: I normally try and add FFO’s in order to at least connect the readers with tangible examples, but Sjálfsmorð af Gáleysi is so unique. But to the best of my ability, and bearing in mind that the sound is different, I would connect the dissonant approach to that of Thantifaxath, the visceral vibe to that of Dragged Into Sunlight and the weirdness and creativity to that of Eeviomorfia. But it does not sound like any of those, honestly.