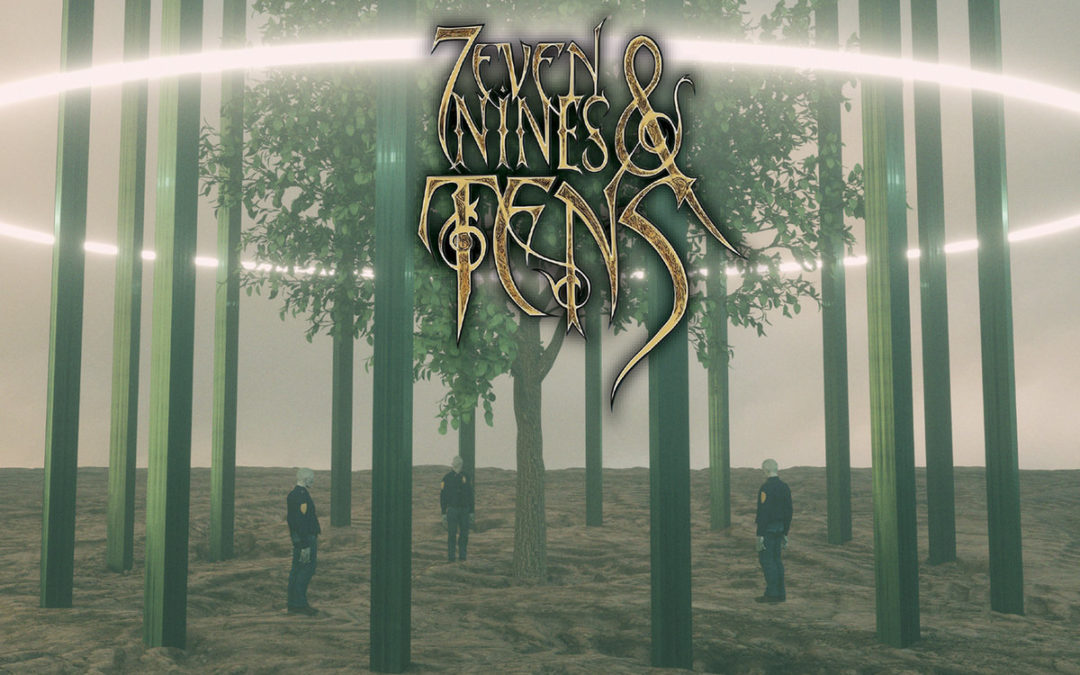 Album – Over Opiated in a Forest of Whispering Speakers

I saw the name of the band, Seven Nines and Tens, and the title of the record, “Over Opiated in a Forest of Whispering Speakers,” and I was excited to hear what that might sound like. And then there was a description. I don’t know who wrote it, but it’s fucking genius: “Shoegazey math metal?” Haha! [Who wrote that?! That’s just fantastic!] I envisioned Shoegaziness and Metal kicking the shit out of Math, and I couldn’t wait to hear it! So, as one does, I began to listen.

There’s nothing violent about this music… until the Math starts making sense. It’s more like the pieces fit together, and I felt the weight of it. I put this album on based on those facts alone, but I was in no way prepared for the heaviness of the journey this album would take me on. The “Progressive/Post Metal” part had my expectations in a different galaxy than my mind ended up. Which, I’m sure you’ll be shocked to discover, can all be blamed on the “Shoegazey” part. Ohh… 1990’s Toledo, Ohio, you are one persistent fuck ton of jolly old shits and giggles, aren’t ya? But the early 1990’s in general, just the place I go in my mind when I think of being alive back then. That’s a place where nostalgia can do both its best and its worst on a person at the same time. Yeah, be careful inviting “Shoegazey” to the party.

I’ll be honest, I was in a dream for a while. It started when I thought I detected some Alice In Chains in the vocal, which seemed odd, because Alice in Chains and Progressive/Post-Metal? But the bass player reminded me how great the guitarist was, and the drummer got jealous, but there was something bigger than all of them that pulled me back to reality for long enough to write anything that made any sense. I thought I heard voices, then a single voice – I shit you not – fucking voices telling me: “It’s going to end, just like it started,” then a single voice “It’s going to end just like it started.” Those words are sung at the end of a song called “Edutainment,” which is the fifth song on the album. I didn’t notice those words until my third way through. But those words snapped me out of the fogginess.

David Cotton’s guitar playing is so goddamn good, and effortlessly matched with his vocals. So good! What a sound! It takes me right back to the 90’s, those first couple tracks. “Popular Delusions,” and “Throwing Rocks at Mediocrity,” oddly enough, sort of sum up the first few years of my twenties. Most people in their twenties, I’d imagine. And everybody’s got a soundtrack for those years of their lives. I’m not saying that’s where Seven Nines and Tens leaves you. But “Let’s Enjoy The Aimless Days While We Can,” yeah?

That’s what this album keeps doing to you. It begs you to stay where it’s safe – with what you thought you knew. Back when you thought it mattered less –  You bob up and down for a while, floating in a ball of energy filled with your entire early twenties. When I think about my early twenties, the band that fills that ball of energy with the most light is The Verve. Hands down. No fucking contest. For me, as a person, zero bands from the early 1990’s still have the same effect on me now as they did when I heard them, for the possible exception of Alice In Chains. I wasn’t listening to Cannibal Corpse in the 90’s, as great as it would be for me to tell you I was.

After spending so much time with this album, I don’t think I’d appreciate this album as much as I do, had I not first heard and lived half a lifetime with “A Storm In Heaven,” by The Verve, or “You’d Prefer an Astronaut” by Hum. Also some similarities to bands like Swervedriver or Ride, for example. All really great bands that mixed groundbreaking guitar work with all types of vocals. All different, but all perfectly appropriate. In trying to think of a modern equivalent, I’d say Sunnata and Spaceslug are good examples. Elephant Tree would be another, so if any of that stuff suits your fancy, add Seven Nines and Tens to that list.

“Over Opiated in a Forest of Whispering Speakers,” their third full length album, will be the band’s first with support from Willowtip Records. It comes out the first Friday of the new year, and I highly suggest you purchase a copy.