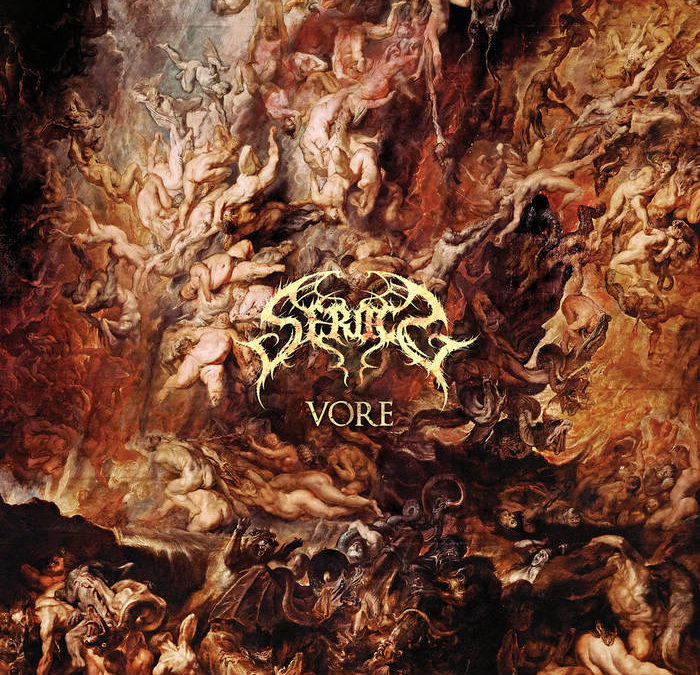 Come one, come all!

Witness the event of the century!

Two heavyweight champions face off amidst a category five tornado and all to the magnificent masterpieces of Mozart.

That’s the closest imagery I can summon to describe this band. Serocs has the ability to create soundscapes of brutality that pummel the listener with aggressive force and make you dizzy with their technicality, yet contain within their melodies a strange allure. I became quite obsessed with their previous full length, The Phobos/Deimos Suite, shortly after it’s release in 2018. That album, and subsequently Serocs themselves, has shoved it’s way to the forefront of my favorites like an overly excited fan at a concert. All of the chaotic brutal beauty (breauty? beautality?) is on display here in Vore yet again.

The intro to Anthropic gives a robotic taunt or warning “not enough energy” before the pummeling guitars come out blaring, Laurent Bellemare  growls and screams his way across the track and the torrent has begun in earnest. The drumming is varied across the EP. Serocs knows when and how to utilize blast beats efficiently, placing them at perfect moments to propel the song forward, and never staying too long to become tedious. The bass is ever present and booms along, even offering a quick bass assault intro to Building a Shrine Upon Vanishing Sands, whose lyrical content delves into the trafficking of ocean sand and it’s catastrophic results to the very foundations of the islands and land masses we inhabit. Heavy stuff.

The guitar work here is the real star of the show though. This is where the beauty is heard. As the drums, bass, and vocals erupt around us in typically heinous death metal fashion, we are also treated to interesting guitar melodies that would be at home among some of the greatest classical composers. It’s a true testament to Antoine Freyre’s songwriting ability. The final two tracks being vocal-less demos are, while more raw sounding, truly a showcase to the outstanding technical ability of the band.

As an album guy who likes to digest music as a whole piece or concept, I am once again going to complain about the length. I’m not a big fan of this tendency for bands to push out small EPs rather than whole fleshed out LPs. However, I accept that this is the world we live in, and I’ll enjoy any new music I can get while I wait for the next full length album.