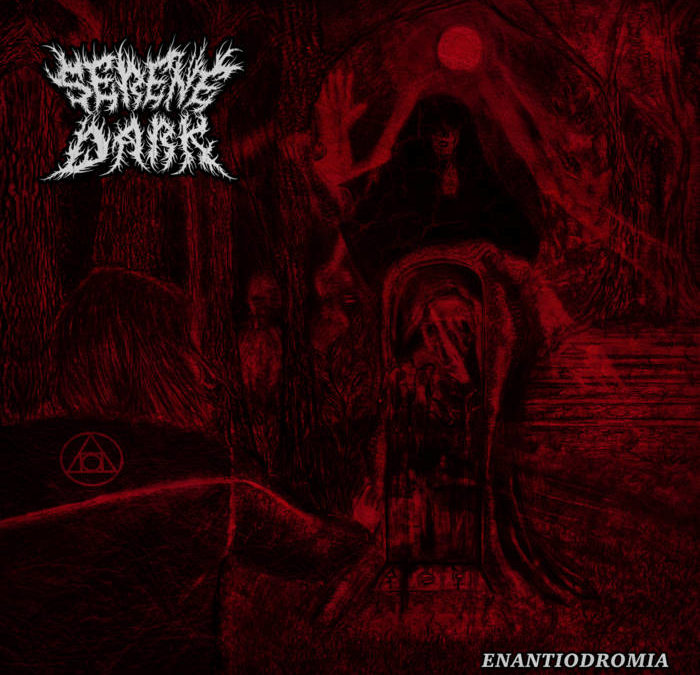 The Light That Be In Me Be Darkness: A Review of SERENE DARK’s Enantiodromia

Rising from the grave of ENDEMISE, a new shade emerges: Canadian quintet SERENE DARK with a new album entitled Enantiodromia. Enantiodromia is a Jungian term, referring to a powerfully cathartic and sometimes destructive collapse of dualism, paradoxical in that the phenomenon involves the overtaking of a rigid conscious principle with its previously repressed psychic counter-impulse. Focusing lyrically on Jungian shadows (sound clips of Jung are distributed throughout the album), Enantiodromia narrates a plunge into the abyss of inner darkness and incorporating the repressed impulses of madness, hatred, anguish, and chaos into the conscious psyche in order to achieve spiritual and psychological holism. Similarly, Enantiodromia reaches aloft into various areas of extreme metal and combines disparate elements in order to create a coherent and unique whole.

The band borrows equally from melodic death metal and melodic black metal, reinforces it with potent orchestration and synth, and powers it with sufficiently blasting aptitude to create well-produced, and muscular presentation. Beyond the well-placed melodic, symphonic heaviness, which is present enough to add depth and strength to the music, but does not make the mistake of trying to carry the it, the prowess of the guitars is absolutely essential to notice. Harkening to almost an old-school death metal shred mentality, it isn’t an exaggeration to say that, in significant sections of several of the tracks, the lead guitar takes center stage, essentially taking the liberty of unfolding long solos as the rest of the song rages beneath.

The vocals are also immediately obvious, and really one of the highlights for me. They regularly embrace a variety of different approaches, predominantly mainstream higher-pitched evil black metal screams (similar to those of DIMMU BORGIR, GRAFVITNIR, and HAEMOTH), but which regularly transition into or are combined with a much lower growling borrowed from the deathcore arena (I could cite some bands if I actually listened to deathcore… turns out I like the genre a lot better when the characteristics are isolated to the vocals and are absent in the music!). There is such variance in delivery here that, even though the lyrics themselves are repetitive to the point of almost presenting as sets of meditative inner-psychic mantras, the reiteration goes unnoticed unless it is being read and not just heard.

Altogether, SERENE DARK represents a significant advance from the band’s previous manifestation and gives listeners a seamless, varied, and epic articulation of black metal, melodic death metal, old school death metal, and deathcore whilst focusing on a fascinating and poignant psychological exploration. Enantiodromia is self-released and available for preorder on digital and physical formats (including a red marbled LP and T-shirt bundles) at the band’s webpage and Bandcamp. The first single, “Of Serpentine Form” is available for examination on YouTube. The second single, “Trance of Disintegration” was premiered on No Clean Singing.