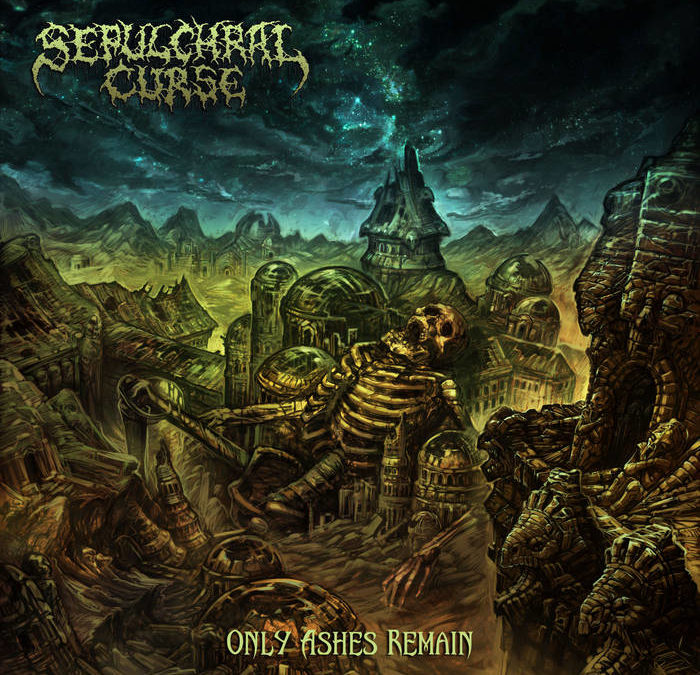 Born in 2013, the Turku based band has released two EPs, one through Chaos and Hell Productions in 2014. The second was released in 2016 through Transcending Obscurity Records. It was on the latter that I first came across the quintet. I found the relatively brief ride very solid, prompting a Round-Up Review where I wrote:

“The vicious chaos found here seems fitting for an album that features a church burning on the cover.  Aside from vocals and the level of down-tuning, much of this feels more akin to the black metal side of the spectrum…especially the dark, filthy riffing.”

The end of July will bring a new addition to the discography of this rising project, and what an addition it is! Only Ashes Remain is the band’s first full length, for one thing. For another, so much gasoline has been added to this already raging fire that the album has become a planet sized conflagration. Sepulchral Curse have stepped it up several notches and it’s time for the world to notice.

Musically, the sound remains a mix of black and death metal. On this release, the band strikes me as closer to the death metal side of the divide. Some of the riffing is blackened and blasts rear their beautiful, ugly head from time to time, but structurally, vocally, and through a good segment of riffing and drumming, death metal shines through. There are even brief, subtle elements of hardcore punk (when the secondary vocals pop up) and traditional heavy metal (occasional parts of the guitar leads).

To me, the strength of this album lies in two key areas. The first is the general atmosphere created. Specifically, the atmosphere is very oppressive, weighty, ominous. This is done through slow burning riffs, heavy, repetitive bass lines, drum patterns that could be used for hypnosis, and aggressive vocals that I wouldn’t want to meet in a dark alley. Only Ashes Remain has to be in the top five albums this year for atmosphere created. Probably the top three. The second are where this album excels can be summed up in three words: riffs, riffs, riffs. The riffing this album is so incredible. It is creative, thoughtfully paced, and relatively unique, and also nasty, focused, and occasionally terrifying. One spot many death metal bands lose me is riffing. Boring riffs make boring metal. Sepulchral Curse has instead captivated me with their pitch perfect riffing. If riffing was capable of summoning demons, this riffing would.

Only Ashes Remain is, in the words of a local Michigan metal musician, a ‘tough’ album. This album could probably beat up your dad and older brother combined. There’s plenty of year left, but I fully expect this debut Sepulchral Curse full length to make noise on my end of year list, and, if people are paying attention to what they should, many other lists as well.