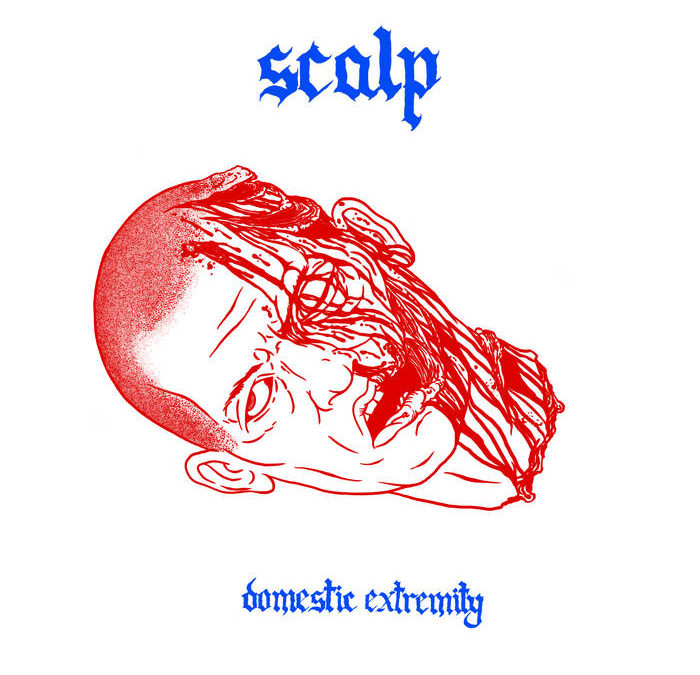 I have been looking for an album that can accurately score the mental image of being perpetually trapped between a desire for things to get better and the urging nihilistic realization that maybe hope is misplaced; that things are only going to get worse (insert flaccid remark on how 2020 was ‘just the worst!’). In reality, things are bad. In reality, we are at the mercy of powers that hold us in an existential fugue state with the coercion of political violence. Looking at the full breadth of these powers and the culture they create can make any person – given this person dislikes things like war, genocide, poverty, white supremacy, etc. – feel horrified, disgusted, unbelievably, caustically angry. I’ve been looking for just one album that can expose this hopeless, dissonant feeling. This is the album I’ve been looking for.

The future isn’t pure, the end is here”

Domestic Extremity is the debut full-length from Southern California-based SCALP. Across its ten tracks, it attacks oppressors in all forms with a real and visceral anger. Musically, this album makes frequent sharp turns in terms of tempo and delivery. The songs swell and bounce before exploding with a ferocity that underscores the vocals in the most disgustingly perfect way.

I’ve personally never been one to drool over breakdowns or to go out searching for the heaviest ones, but the breakdowns on this album really won me over. These riffs feel purposeful and intentional. I’ve heard enough hardcore that throws in the odd breakdown for the sake of having a breakdown, to the point where it’s distracting and takes away from the song. These dime-a-dozen breakdowns are far removed from what can be heard on Domestic Extremity. SCALP allows the changes in both tempo and feeling to melt together to form unique and cohesive tracks, and it pays off well over the course of the entire record. I have a feeling these riffs are going to be bouncing around my head for the foreseeable future.

Domestic Extremity is an album that can be recommended to hardcore veterans and that-one-friend-who-isn’t-really-that-into-heavy-music alike. SCALP knows their job and they do it well. An album with songs about hating fascists and doing cartoonish levels of violence against sexual predators may be a good catharsis for some. This is the album.