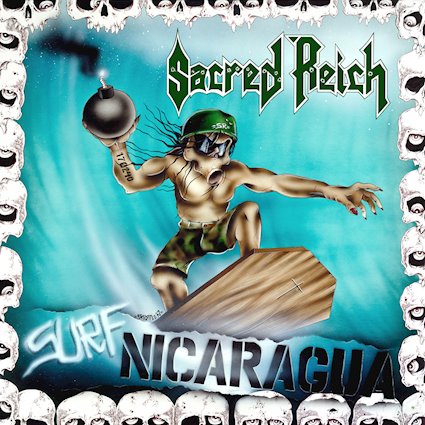 Picking on a trio of releases that spawn from 1987 to 1990, and doing it in 2021, is surely a risky step. Especially if you consider that I am not exactly known in the metal circles for my reviewing abilities (or any other abilities to that concern). So why should I do this?

Well, to my advantage I can say that I was there, listening to this when these releases landed with big splash and mighty roar (especially the EP – Surf Nicaragua).  It may also be of notice that I actually own the original albums on vinyl, and in their first edition. So, I just felt compelled to jump on the keyboard and throw a few words on it, mainly out of pure nostalgia, I confess.

Writing about these albums after so much time has passed gives you a different perspective, while you can actually try and compose it together with the memories you have of those late 80’s.

You see, in those late 80’s, we thrashers were too avid for the scene. With no internet and almost no media to do coverage on the upcoming powerful metal music, the discovery of it was a real challenge, but one we sought after on a daily basis, by all means necessary.

I remember that summer of 89. My “group” of metalhead friends would hang out together in the obscure Lisbon nightlife and we would establish conversation with any other guy that would look like a metal brother to us. That’s how we met this group of Dutch guys who were visiting Lisbon. The next day we were all together at the beach, with a battery radio screaming loud the blasphemous sounds of thrash, hardcore and crossover metal, and this one Dutch guy asked to contribute with some tapes he had in his bag….and “Surf Nicaragua” started playing. It sounded so good that next week I went to that one flea market in Lisbon where there was this guy who sold metal vinyl’s (one of the only two places in Lisbon where we could find that)…and I got “Ignorance”.

That was how things rolled back in the day folks, along with a lot of tape trading, pen pals and obscure handwritten zines that would be distributed by the most strange ways…

To cut the story short, that’s how I was introduced to Sacred Reich, a strongly fueled political band with a clear anti-fascist statement in their compulsory and vicious but well written lyrics.

The music itself had some of the best thrash attacks of those days. “Ignorance” joined the quickness and quirkiness of early Slayer but with actually better vocals. The occasional leanings of crossover riffs reminding me of DRI, the viciousness of Nuclear Assault and the quite great playing of Whiplash, the truest, and close to the most majestically played thrash of those days, putting them in line with Sodom, Exodus or Exumer. In sum, real power and real rage put into practice in the best way that was heard by that time.

“Ignorance” is, simply put, one of the best examples of the thrash genre of that time: meaningful lyrics sung with conviction and enveloped within a true wall of classic, brilliant thrash metal.

Listening to the anthemic “Death Squad”, “Rest in Peace”, “Sacred Reich” and “Ignorance” elevate this album to the ultimate league of legends from the early thrash days, establishing Sacred Reich as one of the most singular yet brilliant outfits of the genre.

Then came “Surf Nicaragua” (the one I actually first listened to), addressing more foreign American policy in the lyrics. Some different vocal approaches started unfolding on this EP, that would then be more established in the following “The American Way”. While staying highly political, the music was already shifting the sound a bit. Some more groove was to be found (that surf-themed interlude in the self-titled tracks is the best example). The band was going softer while technically displaying a stronger array of possibilities. But yeah, that viciousness of the debut was starting to decay. Win some, lose some, as they say.

Objectively, this is a more technically driven EP, also slower and more expanding, musically speaking. Still a fantastic example of how the thrash bands were starting to expand their horizons and actually evolving. Sacred Reich may have started to lose some of their fans with their more encompassed and groove-tinged approach on this album, but this was actually the EP that brought them to my knowledge and to their “eternal” list of fans. Ah, and we cannot simply ignore the cover of Black Sabbath’s “War Pigs” that is on this album, now can we? A proper tribute to a band that, in the end, was the responsible for everything…everything. I mean, how would my life have been without the bases Black Sabbath launched?

“Surf Nicaragua”, while keeping a very personal aura of its own, did present a shift in playing for Sacred Reich, leaning towards a less raging-less wrathful-less fiercely monolithic playing, a more eclectic and technical display of capability. It lost a lot of power and muscle, but it gained intelligence. Ah, but that “Draining You of Life” does, for a moment there, turn things totally upside down, like a farewell to their early sound. A pounding ton-heavy and fast thrash attack that one cannot but not feel a shiver down the spine when listening…

And now entering “The American Way”…

The metal world was shifting in 1990. The emergence of death metal and the shifting of many listeners towards that new sound, along with the seemingly incapability of many of the classic thrash bands to evolve, while those who did try to evolve were facing lots of criticism (Metallica, Megadeth, Celtic Frost…the list goes on forever).

So Sacred Reich was one that embraced evolution, presenting a sound that had started to be experimented on in parts of “Surf Nicaragua” (the track “One Nation”). “The American Way” sees a more melodic, slower and mellower side of Sacred Reich, even if keeping the omnipresent political statement. Detractors will say that this album marked the end of their love for this band, and one can even see that opening track “Love…Hate” as a prophetic one indeed.

Don’t get me wrong, this album is absolutely great: there is a message, there is juice, there is power and heaviness. But for those that were so fond of the “Ignorance” relentless pounding, this renewed pondered, brainier and more elaborate sound was not the twist they were aiming for. I do appreciate it, as it shows a band that was not afraid of going in the direction they felt they should follow in those early 90’s metamorphosing years. And then that closing 31 Flavors is so funky that many may have lost faith in it…I, on the contrary, just see a band exploring all it’s splendorous talent (and remind me of Faith No More, to be honest).

“The American Way” shows a band that has learned to groove and to accommodate a different vocal approach, slowing down the guitars (but with one of those bone crushing tones that must be heard to be believed).

While not always referred to as one of those historic bands of the genre during the early thrash years (normally considered to have lasted to 1989), the truth is that Sacred Reich was one of the most focused and talented ones. With destructive yet meaningful political views and the proper intelligence to put them into words and then envelope those in crushing musicality that, at points, display just the right emotional interpretation of those lyrics.

Wrathful-Riffage-entitled and (later) melody-entrusted, Sacred Reich deserves to be revisited, respected and appreciated.

As for me, now an old man and lately more inclined towards the black metal side of things, if you put on Sacred Reich, at any time, you will see me jump right in the circle pit within the first seconds. Memories of the great times these guys provided me will NOT be erased or forgotten.

Nuno’s passion for Death and Black Metal, especially in the most experimental/avantgarde and atmospheric subgenres is legendary (at least in his house).