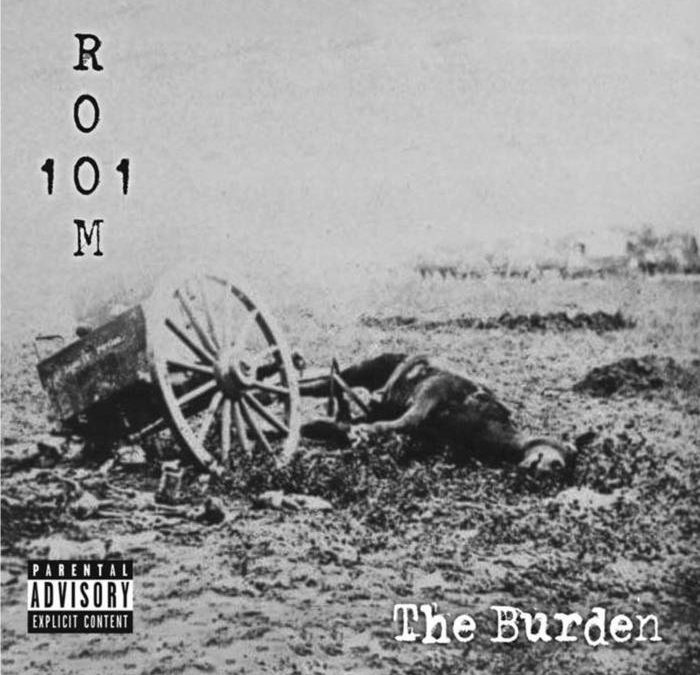 Hailing from nearby Lansing, Michigan, Room 101 is a newer project formed for the world to see last year, but made up of scene veterans. Every member has at least one other band credited to their name and the experience shows. The Burden EP is a release which sounds like it was made by a ten year band, not a debut EP from a first year band. On their Bandcamp page, Room 101 name checks Neurosis, Crowbar, Eyehategod, and Acid Bath as influences, and those make sense. I would add Primitive Man as well, as the Denver band is the first one which popped into my head when I pressed play. None of them are an exact fit, and that’s a good thing, as it shows the Lansing quartet ultimately has their own vision, but the influence of all can be heard in these six tracks.

What strikes me most about the release is the atmosphere. It is utterly bleak, like walking into a ghost town. At first, you notice the tumbleweeds and the gusts of wind as it whistles down alleys. Then you start to spot broken windows, rusty machinery, structural damage in the buildings. With growing horror you spot flies buzzing over the body of a dead animal, and then finally, corpses begin to take shape in your vision.

Cletus (drums) and Jake (bass) are the engine that drive this creature forward with an unrelenting, unhurried pace, like a predator stalking it’s prey, waiting for the moment to strike. Kevin Lupu and Stiles share guitar duties, atmospheric riffs and raw abrasion fill the air. All except Cletus get in on the vocal delivery at one point or another, harsh, raw cries of anguish and destructive rage.

Perhaps the most striking thing about the release is the subtle psychedelia, as if the entire band was ingesting mushrooms through the composition process. If that’s the case, they were magic mushrooms of the meanest variety, as the psychedelia is dark, vicious, and quietly terrifying. The vision presented here, shared by the band for all to see, is one bleak danger and ultimate destruction. And that, of course, is the beauty.