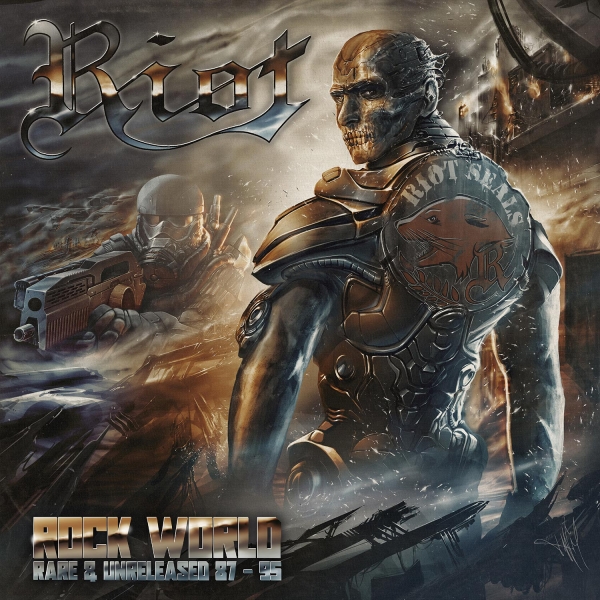 Ride forward on thy gallant steed, thou most noblest and intrepid warriors of metal. This steadfast dedication to the cause of heavy rock and traditional metal is a passion shared by many — perhaps considered a bit tongue-in-cheek by some, as well. Over the past forty years of turbulence, tragedy, and small triumphs, Riot have always held firm as America’s answer to the New Wave of British Heavy Metal.

Formed in the late 1970s by guitarist/principal songwriter Mark Reale, Riot’s emerged from the NYC streets purveying an energizing and melodic brand of proto-metal. Early albums such as Narita (’79) and Fire Down Under (’81) captured the rapt attention of London while failing to catch on at home. Following the untimely departure of original vocalist extraordinaire Guy Speranza, Reale and Riot began to experiment with a more laid-back hard rock direction with another phenomenal vocalist (and bonafide rock star) Rhett Forrester. By the mid-’80s, Riot Mark II had also disintegrated. But it didn’t take long for a third version of Riot to unleash the Thunder and the Power.

Rock World (Rare & Unreleased 87-95) harkens die-hard Rioters back to the late 1980s and the landmark masterpieces of power and speed metal — Thundersteel (’88) and The Privilege of Power (’90). Many fans consider these two albums, particularly the former, as the blueprints for the U.S. power-metal scene. Featuring eviscerating and crunchy riffs, infectious song structure, and the pristine, high-range vocals of Tony Moore, Riot’s second career comeback remains a beloved epoch. On Rockworld, longtime Riot super fan Giles Lavery has compiled this fun, though uneven in quality and certainly non-essential, collection of demos, B sides, and rare studio outtakes.

First off: the really good stuff. Back in the late ’70s, Riot was approached to write a theme song for a music TV show. It is no mere hyperbole to say that hearing the late legend Guy Speranza singing again on this intro/title track is worth the price of admission alone. The tune is a brief — and a tad bittersweet — gem from the Riotous past. Alternative versions of classic Thundersteel anthems “Bloodstreets” and “Buried Alive (Tell Tale Heart)” are a blast to hear again, albeit with the slightly-modified arrangements (an intro moved around here, a new guitar solo there). The instrumental version of the monumental power ballad “Runaway,” is an intriguing listen; likewise, the alternate versions of early-’90s ‘bangers “Medicine Man” and “Magic Maker” (sung by the mighty Harry “The Tyrant” Conklin of Jag Panzer) are a treat.

Rock World is a lot to digest, and that’s both a blessing and a curse. Yes, this is a compilation and not a new album. But do we really need two versions of “Medicine Man,” or the funkified hair metal leftovers of “Good Lovin” and “Creep”? That’s for the diehard fan or newbie Rioter to decide.

If anything, look at Rockworld as an enjoyable primer for the next Riot V record. Mark Reale (R.I.P.) would be proud.