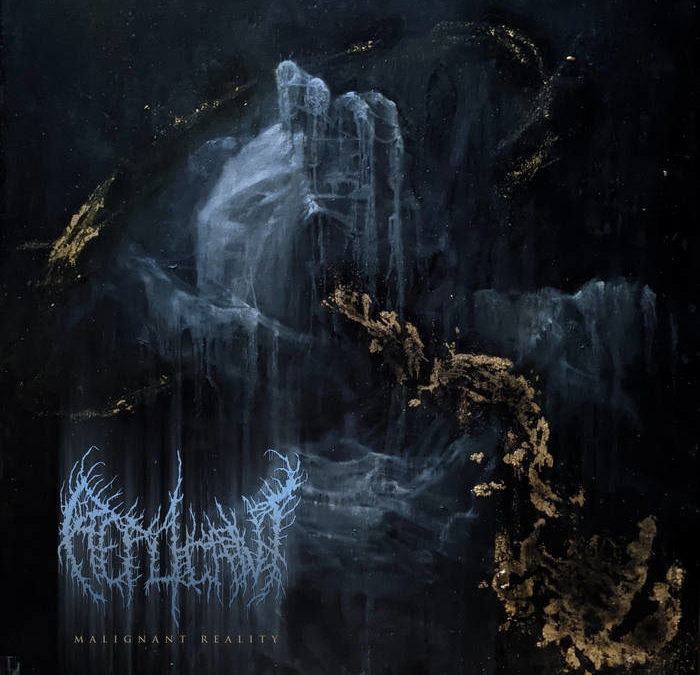 Holy shitballs. Metaphor city here we come! US based Death Metal (if you could call this fucking nightmare that) band Replicant are releasing their second full length album “Malignant Reality” in September (as you can see by the date above for those who pay attention). And this thing… Well, words fail me, almost.

Gobsmacked would be an understatement (we have now arrived in metaphor city, please depart the train in an orderly fashion, and thank you for travelling via DeathRail. As we say, we would rather you die on one of OUR trains than anyone else’s. Have a good day). This is like having a makeover with a shovel. Not one of those puny ones you use to plant your fucking flowers with, or even dig holes in your backyard. No, this shovel comes pre-wrapped with a set of ear plugs so that you cannot hear its constant screams of anguish as it tries to get back to whatever bastard dimension of Hell it came from. It radiates hate, and all small animals will run in fear (handy if you have a cat or possum problem trust me), and also drips corrosive fluid from it’s shovelly bit, you know, the bit that digs.

The opening track “Caverns of Insipid Reflection” invites you into the hardware store, and basically leads you to buying this possessed gardening tool with a soothing and rather Blade Runner-esque intro, with some weird arsed shit in the background, and then goes straight for the checkout and before you know it you are driving home with a head full of voices and pure bat shit insanity. “You must have me,” it whispers, and then knocks you fucking senseless. Pictures of a restrained madman in a straightjacket float through your mind. Surely this singer is a demented bastard that dwells in a padded cell. Images of Mozart, Tchaikovsky and Chopin (pronounced Sho – pan if you are an city latte-swilling lover of all things fine, and if it WAS a pan you were seeking…wrong aisle mate) appear in your field of vision, asking you why, why has music been so desecrated by these foul beasts. Did they not try to make people happy?

No. Under no circumstances do Replicant attempt to make you feel happy. Track two “Relinquished Self” speaks for itself. You are now under the control of this fucking gardening implement, and the bass lines and riffs around the 1:20 mark will only further enforce this by digging into your brain faster than a rat scurries up an aqueduct when fire approaches. This is pure madness, nothing less. It burns, it scolds, it writhes with a life of its own as surely as the dimension that the demented spade you have in your hands does now.

Track the seventh, “Chassis of Deceit” reminds me of a conversation I once had with a colleague of mine, Hayduke, about a band named Taphos (“listen to Taphos, listen to Taphos” he said.. And I bloody well did!) from Denmark. The lunatic in the straightjacket who surely must also be chained to the floor, so he has less chance of escape has a certain style about his ‘Death Grunts’ that is totally inspiring. This reminds me much of them, but this bloke ramps up EVERYTHING vocally to the point of, well, utter madness. If this bugger ever sleeps they must shove him in a lead coffin, so just like the shovel they can’t hear his demented bellowing night after night.

One more track or I’ll never shut up. Closer “The Ubiquity of Time.” Majestic as fuck. Soothing almost to begin with, then cosmic riffing leads you up into layers of cloud-like calm. Maybe it’s the drugs kicking in and the shovel being quiet for a moment, but you feel relaxed… Yes, yes.. The voices scream, that voice, HIS voice, but all is fine.. The monster screams within its confines, but it cannot touch you. And then, it stirs, it rises, and you are on the floor gasping for breath with an evil fucking shovel in your hands..

This fucker IS PURE DRIPPING HATRED. Be warned. It will send the weak insane, the unprepared will turn on us all, and be very aware of digging tools that speak to your mind.

I can only say this. If Morbid Angel around “Blessed Are The Sick” travelled back in time and fucked Voivod with a strap-on made out of parts of the Spear of Longinus in the eighties whilst Gorguts were playing in the background, this is their bastard child. Heavier. Uglier, but no less twisted.

Recommendation – If we had a rating system, 10 out of 5. We don’t, so just let this shovel you around the face and see if I’m wrong. Thank me later.