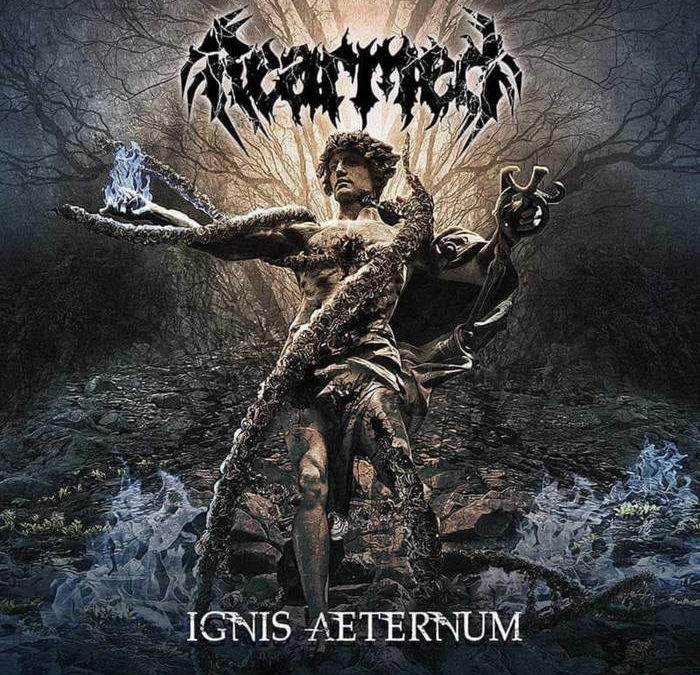 Short OCD rant: Re-Armed has a hyphen in their name…but not on their album covers, all 4 albums. WHY?! Just, why? Okay, I feel better now, let’s do this!

Re-Armed formed in 2001 and have managed to stay in the game despite two major lineup changes in their career.  Ignis Aeternum is their fourth album, and the first to fully incorporate their symphonic elements throughout the whole album. Previously it was mostly used for intros.

If you are a fan of Enslaved or Children of Bodom, I recommend you give Re-Armed a try. You can call them power death or symphonic death thrash, it doesn’t really matter. What matters is the amount of energy they bring to their latest release and it’s quite a bit.

Ignis Aeternum is easily their most melodic release to date and honestly, it’s my favorite from them. This album is so packed with infectious melodies from the guitars and keyboards, that it’s honestly hard to pick a favorite song.

Gun to my head I’d have to say my fave is Ode To Life. It starts with this sick bass line that just lets you know you’re in for a wild ride, and oh what a ride.

Side Note: Can we bring back bass intros for moshable songs? I know nu-metal overused it but the “four china cymbal hits” thing we have now isn’t nearly as creative. #bringbackbassmosh

When writing the album, Re-armed decided to try a new take and create a “light in the darkness” themed album. Ignis Aeternum lyrically celebrates life while simultaneously reminding us of our dark pasts. The upbeat keyboard and heavy guitars convey this musical concept almost perfectly.

Life is hard, but life is good. You can’t have spring without the rain. You can close your eyes while listening to this album and picture standing in the rain; cold, clean refreshing, washing away the dirt of the day like the sins of the baptized. The rain drums with intensity and the thunder rolls like a bass line. Welcome home.

During these crazy times this album was just what I needed.