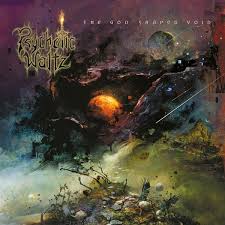 I mean, prog metal is prog metal, with no grey areas or amorphous sub-genre murkiness, correct? Rather, “progressive” bands should be judged based on their ability to evolve naturally as well as on their technical mastery. Just as the overarching sub-genre has developed continually over the past 20 years —  incorporating disparate elements from metalcore, djent, avant-garde jazz, extreme guitar acrobatics, ambient, etc. — classic prog-metallers of the 80s and 90s are still treading the turbulent waters of musical complexity.

Psychotic Waltz is just one such band. If the San Diego-based quintet’s name sounds unfamiliar, try talking to a few European metalheads. The band gained some notoriety across the big pond throughout the 1990s with their unique blend of aggressive thrash riffing,  and melodic and innovative arrangements. They released four albums, most notably 1990s eviscerating progthrasterpiece A Social Grace, before calling it quits after 1997’s Bleeding; in 2011 the original lineup officially reformed, but their public activities were mostly limited to a handful of European shows. Secretly, however, they were writing the ambitious new opus known as The God-Shaped Void. On this new album, Psychotic Waltz have continued their evolution towards the more subdued direction of Bleeding — with varying degrees of success.

For starters, thankfully, this is a bonafide Psychotic Waltz record, still anchored in large measure by the extraordinary vocal (and flute) stylings of Devon Graves (formerly known as Buddy Lackey). Graves sings compelling and stirring vocal lines throughout, riding his bounteous, impeccable tone to the far side of the void and beyond. The guitar/keyboard tandem of Dan Rock and Brian McAlpin consistently delivers neo-classical-based harmonies and lead melodies that harken back to the gloriously symmetrical works of Queensryche or Alder-era Fates Warning. Conversely, Rock/McAlpin eschew the modern prog-metal trend of jamming 1,000 chromatic scale patterns into 30 seconds of soloing, or tuning their eight-string guitars down so low only an elephant could discern the flatulent tones (phew!). Void is also a consistently grooving record, thanks to the locked-tight and fluid rhythms of bassist Ward Evans and drummer Norm Leggio.

This, unfortunately, brings us to the primary issue with The God-Shaped Void — homogeneity. Unlike with their early-’90s output, Psychotic Waltz songs circa 2020 revolve around a preponderance of plodding tempos, riffs softened around the edges, and a decided dearth of thrilling emotional peaks and valleys. Long gone are the angular, staccato thrash riffs of the Waltz of yore; they have been replaced by a sense that the band’s atmospherics have nearly buried the metallic edge. Without a keen listen, this can relegate Void to the Bluetooth of background music.

Still, there are some cool tunes here, starting with the catchy and relatively-aggressive opener, “Devils and Angels.” Graves’ impassioned vocal melodies elevate the crunchy groover, “All the Bad Men.” The acoustic-based ballad, “The Fallen,” almost recalls mid-’70s Floyd dancing through a Jethro Tull minstrel show; the dynamic “While the Spiders Spin” undoubtedly is the most ambitious and clever track on this pleasant, though flawed, album.

Anyway, have a psychotic dancing break if you like. After all, I may not be a smart man, but I know what prog is.