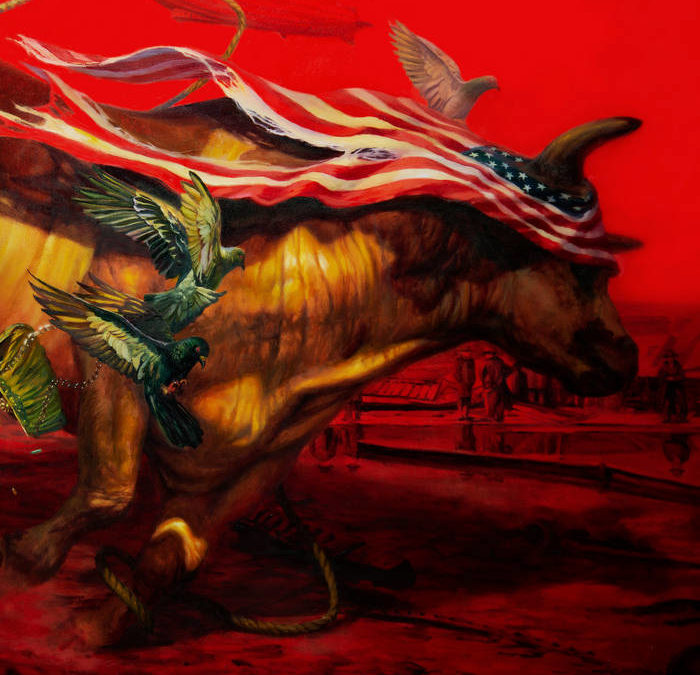 Palimpsest – noun: A manuscript or piece of writing material on which the original writing has been effaced to make room for later writing, but of which traces remain.

Protest the Hero is a band that resides within a very particular niche of progressive and technical metal, with a distinct -core sound to it. From their astonishing beginnings as teenagers, with the release of debut album Kezia, to the far more progressively leaning Pacific Myth in 2016, they have always carved a very specific place for themselves amongst prog and hardcore fans alike. Their skill at penning songs that fly past with a whirl of technical proficiency while maintaining an indelible catchiness will have you singing along to both choruses and riffs alike. That ability is as present as ever in their newest offering, Palimpsest, despite the strife that led up to its creation.

Back in 2018, the band made the difficult decision to cancel an upcoming tour and delay the recording of their next album as vocalist, Rody Walker, had suffered vocal issues that they feared would lead to irreparable damage if not treated. Apprehension as to whether the new album would ever see the light of day began to creep in, and even a granule of doubt as to the quality was present. Small updates were offered from time to time with assurances that Rody was recording the new album with the utmost care and progress was moving forward slowly. Then, in April 2020, the band dropped the first single along with pre-orders for Palimpsest and any if all doubts were laid to rest. This was still Protest the Hero at its finest. Rody’s voice sounded just as good, if not better than before, due to the care taken in recording.The official release was slated for June 19, 2020. Upon realization that this date coincided with Juneteenth and it’s important meaning at this time, the band opted for an early release on June 18 to honor the holiday instead.  Now the album is here and it is in one word: amazing.

Over the course of their five previous albums, Protest the Hero have evolved as both musicians and lyricists, and this is just a new benchmark for them. Musically, they have always had a largely technical aspect. Guitarists Luke Hoskin and Tim Millar speed along their fretboards with vertigo inducing speed that only adds to the infectious nature of their music. The members of the rhythm section have shifted over the years, but drum and bass duties have always been handled with the same airtight mentality and are just another layer of the musical mosaic. They’ve always contained a symphonic element to their albums, usually present in interludes and segways from track to track. This is true in Palimpsest as well, with interlude tracks, “Harborside”, “Mountainside”, and “Hillside”, and the intro to opening track “The Migrant Mother”, but also has been incorporated into the songs themselves such as the strings that permeate “Reverie”, and the finales of “Soliloquy” and “Rivet”. It all feels quite at home in Palimpsest with the same familiar technicality, progressive song structures, and snappy rhythms and hooks. You’ll be hearing these songs in your head over and over and be itching to hear the album once more.

As expected, the largest change over the years would be in both vocal performance and lyrical content. Rody’s early days were far harsher and would contain a combination of high shrieks, falsetto singing, and the occasional low growls. As his voice matured over the years, he began to have more clarity in his singing and experimented with more melody, still screaming and growling from time to time. Palimpsest has proven that he hasn’t lost his touch. He sings with fervor on the chorus to “The Canary”, soars high in the falsetto climax of “From the Sky”, and snarls with punk-like aggression on “Soliloquy”. It’s safe to say he is doing just fine and the future looks bright for the band. Rody’s lyrics are even at an all time high since taking over lyrical duties from ex-bassist Arif after their second album. His lyrical debut, Scurrilous, was not quite the caliber expected from their previous albums but he quickly hit his stride with both Volition and Pacific Myth. While Kezia and Fortress were both concept albums, the following three albums had stand alone tracks that touched upon varying degrees of topics. Palimpsest returns to the concept based approach once again.

Protest the Hero has never been a band to shy away from controversial lyrical topics, their first two albums being concepts that dealt heavily with feminism and social injustices, and plenty of songs peppered with political messages among their others. The newest album is no exception what-so-ever; the cover art is adorned with a bull shredding an American flag, a gun touting monkey atop a donkey, and doves scattering. Palimpsest has arrived at the seemingly perfect moment with it’s loud declarations of a fundamentally flawed America and album title that alludes to revisionist histories that are told in the most propagandists fashion to make the country look far greater than a closer look at it’s bloodsoaked past would reveal. Of course, upon writing and recording their first album in four years, they would have had no idea the tumultuous social environment it would be released upon. However, it has come at a very apt time as civil rights are on the cusp of a hopefully major overhaul, and we are being forced to take a closer look at just how very little progress we’ve actually made. This album is chock full of criticism towards The United States of America. Dealing with a myriad of issues such as Western expansion on opening track “The Migrant Mother”, misogyny on “The Canary”, the incarceration system on “Soliloquy”, and the Native American genocide and defacing of The Six Grandfathers into Mount Rushmore on “Little Snakes”. The final track “Rivet” starts with an appropriate incorporation of depression-era classic “Brother, Can You Spare a Dime?” and continues with an obvious callous take upon the President with a chorus that literally shouts “Let’s make America great again”, thick with satire. The whole album is summed up nicely with some of the final lyrics:

No country’s history is free from bullshit

But everyone just seems so fucking proud.