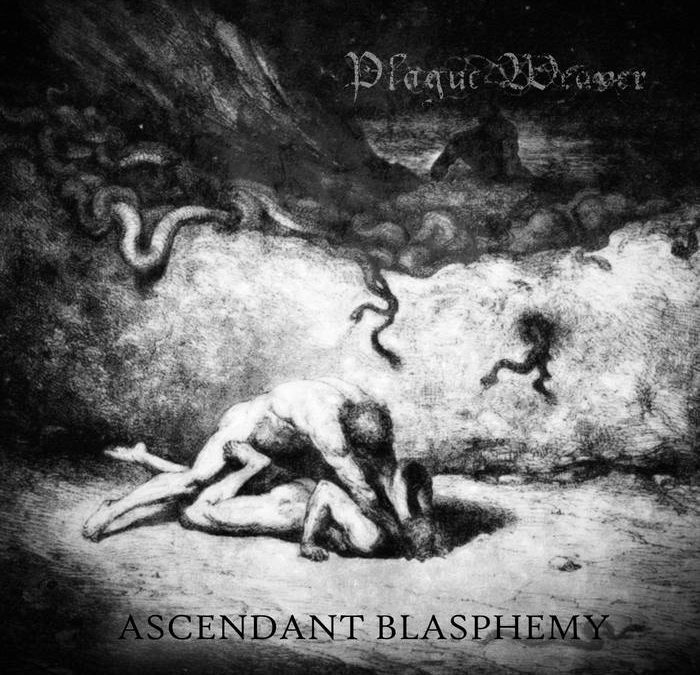 Ascendant Blasphemy is a slow-burning, mind-bending journey into the utter darkness of the void. The hellish atmosphere created by doom paced, blackened riffs afflicts the listener in a torrent of negative energy. The debut full length shows Plague Weaver already at a height some projects never achieve. The Mississauga based duo is black metal to their core, but also draw liberally from doom pacing and atmosphere, as well as more sparingly from death metal burliness to present a weapon of final destruction in the form of eight obliterating tracks across nearly forty minutes.

Originally the solo project of one RM, Ascendant Blasphemy sees the addition of vocalist JC, whose rasping growls are all aggression and malevolent intent. RM handles the rest from the incisive riffs to the pacing and precision of the rhythms. The potency of the duo on this album can’t be overstated. They have nailed a sound always on the edge of completely washing the listener away, like a tidal wave just ready to crest.

Foul atmosphere and pugilistic attacks leave the listener mentally bloody, with bruised psyche, ready to relent the demands of the artists. Though that is the case, Ascendant Blasphemy has subtlety throughout. This isn’t war metal for example, all haymakers to the temple. If anything, Plague Weaver ‘floats like a butterfly, stings like a bee’, metaphorically of course. The album realizes a mighty vision, dark as sin, bleak, and burning with sulphurous intent. Allow the waves of hateful heat wash over you in their cleansing fire. Welcome void.