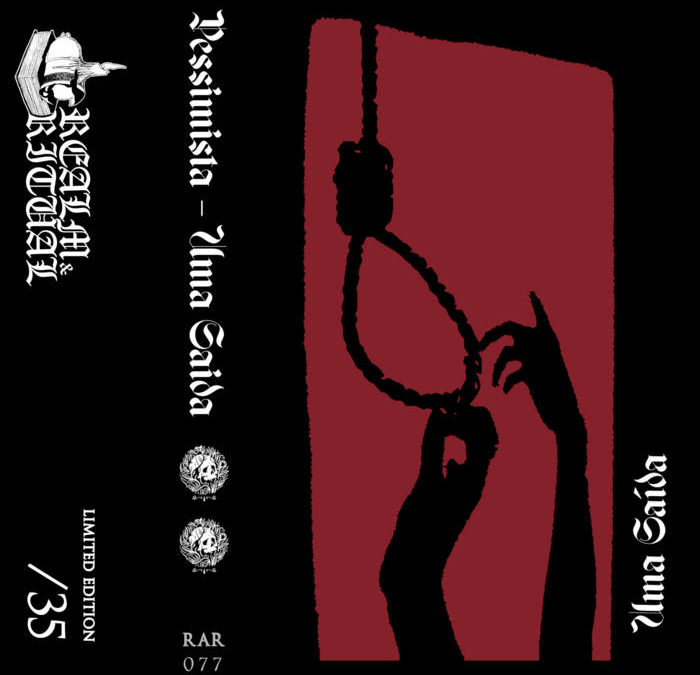 Originally released in November of 2020 digitally by the artist, Uma saída saw a cassette release in January by Realm and Ritual. The cassette sold out quickly (as is often the case with this label), but the album can still be purchased digitally. Trust me when I say that it’s worth it to do so. Pessimista is fast becoming a favorite of mine and for good reason. The artist creates exceptionally immersive black metal using a variety of influences in ways that pull me in completely. Elements of raw, depressive, and even post-black are woven together to form a cloak of comfortable darkness.

Hailing from Brazil, is the sole work of Jaketeme Zapelloni, according to Metal Archives. Though depressive in nature, Uma saída, and all the Pessimista releases, are also antifascist RABM hymns confronting oppression. I, of course, stand in solidarity with this mission.

Uma saída is the first, and so far only full length Pessimista release. Across forty two plus minutes, Zapelloni spreads his musical wings, taking advantage of the time given on a full album. Tracks are allowed to breathe and spread large across the landscape of the listener’s mind. Subtle elements, such as the melancholy piano in the early parts of Um semáforo eternamente fechados pros meus sonhos, add a painful beauty to the tracks made harsh through the vocal attack. Tremolo picking and riffs slither through steady drumming, leading the way forward.

This album carries an emotional resonance that I’ve come to expect from Pessimista. Through the extra time allowed on a full length, the artist really spreads their wings, taking the time to develop each feeling, each howl, each riff, each drum stroke. Give yourself space to listen to this undisturbed. Let it’s weight settle on you. Allow it to speak to you as it will.