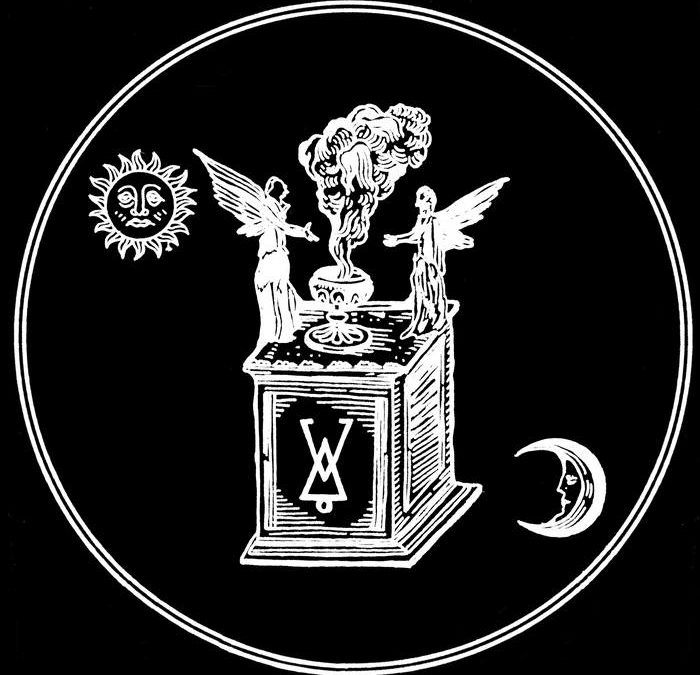 Hymns of Blood and Smoke – A review of Pelgrimsoord by OSSAERT.

Man, this project kicks ass. Though not described as such, it almost makes sense to think of OSSAERT’s present offering Pelgrimsoord (“Site of Pilgrimage”) as a sequel to the debut album Bedenhuis (“House of Worship”), which I reviewed in early 2020. The musical style, a surprisingly coherent mix of raw / melodic / progressive / punkened black metal (yet without really being avant-garde), and exceptional songwriting quality of sole Dutch creator P. is maintained, as are peripheral characteristics. For instance, each album is limited to four sufficient tracks, and each features a somewhat basic (but cool) symbolic structure on a stark black background for the album cover. The risk, of course, in creating an album that initially seems so similar to its predecessor, is stagnation. So how does Pelgrimsoord compare in the scheme of things? Let’s find out!

Track one (“De Geest en de Vervoering” [“The Spirit and the Rapture”] is awesome. It almost seems to progress steadily through different waves of black metal, starting out fairly rudimentary and then moving into more third wave Scandinavian sounding melodicism, all the while highlighted by particularly audible and warm bass guitar performance, and urged along by some eerie, clean vocals which could almost be called melancholic except this fails to capture the sense of transcendence from which they emerge. Things start to go a little ballistic about halfway through the track wherein we find ourselves in increasingly aggressive arenas with a sudden blistering onslaught of much more death metal-oriented approach. This is both fantastic and (unfortunately) brief, and the song reverts back to the intoxicating bass lines mentioned before which, the second time around, really seem to take center stage.

Track two (“De Val en de Beroering” [“The Fall and the Turmoil]), is more aggressive right off the starting line, initial charging progressions evolving into more punkish d-beat velocities a little further on in the track. Those clean vocals return again for their characteristic pensive and almost mournful addition. The midsection of this track again offers something special, in this case a ludicrously badass driving progression, intoxicating lead riff, and a repeatedly thrashing, convulsing bassline that I can’t even really begin to describe. This might well provide the very best moments of an already stellar album and P. must have known that he was on to something with this section, because it alternates with those sweet cleans and repeats itself not once, but twice more and to the conclusion of the track! It’s damn-near orgasmic.

Track three (“De Nacht en de Verdwijning” [“The Night and the Disappearance”]) starts out a little more plodding and slow burning, a grinding, churning riff and some fucking low vocals to go along with it. True to form, after a more than sufficient buildup enhanced by cleans, about halfway through the track we’ve got an apex: mixed ragged and cavernous voices and furious riffing, blossoming into a truly beautiful guitar lead. This is juxtaposed with a repetitious progression accentuated by something that is either a fucked up church organ or guitars pitch-shifted and layered so heavily that it sounds as such. Pretty amazing how OSSAERT manages to span so much ground with such cohesion overall consistency without every straying too far.

By the time we hit the fourth track (“De Dag en de Verschijning” [“The Day and the Apparition”]), this tendency to seamlessly switch gears throughout the track is fully expected, and I’m not particularly surprised when the initial d-beat drum approach does not evolve into some thrash attack but rather full-on luminous post black atmospherics. This track vacillates between that and fairly standard melodic black metal territory for most part, the bass having a prominent return, but perhaps the most notable element on this one being the vocals, which achieve new heights and heretofore unheard moments of pristine clarity and luminosity.

So what’s the verdict? Simply put, while it languishes a bit in some places (mostly the latter half of track 3 and track 4), Pelgrimsoord seems to take the sound of Bedenhuis and capitalize on it by inserting a handful of really cool extras. While the currently available single “De Geest en de Vervoering” (track 1) is really damn good, it is “De Val en de Beroering” (track 2) which is particularly successful at this, ultimately standing out as certainly the best track that I have heard across both albums, but also one of the best singular songs that I have heard this year. Readers should DEFINITELY check it out!

Pelgrimsoord digital, CD, and black LP is available preorder now on Argento Records Bandcamp, as well as Agento’s www alter ego Wolves of Hades Records (which also features a “blood and smoke” LP… yeah I grabbed one of those). There is also a good chance that Pelgrimsoord physicals will appear in the US-based The Hell Command for those US fans who possess the virtue of patience.